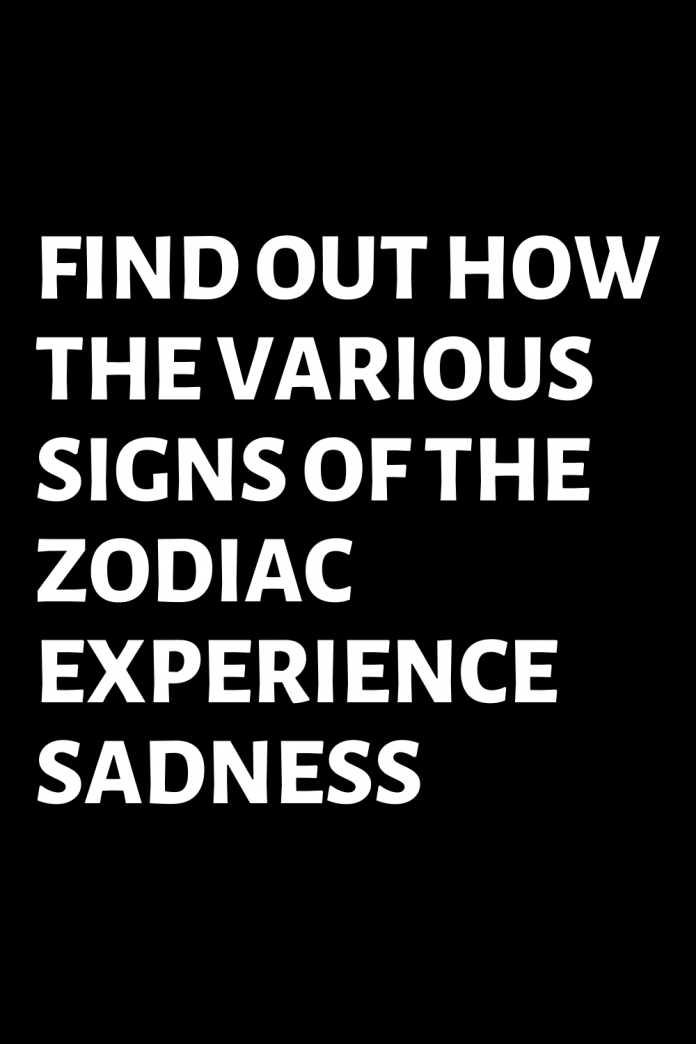 How do you usually deal with sadness? Find out based on your zodiac sign.

Sadness is one of the feelings that most people would rather avoid having. Unless you are budding poets, writers or songwriters, able to use this particular state of mind to transform it into something artistic, feeling sad, in fact, leads to burdening the days, making you perceive everything under a different perspective and extinguishing any possible enthusiasm. Of course, there are situations in which cultivating this state of mind is normal and it is equally right not to suffocate it but to leave it free to be heard and vented. But aside from these cases, sadness can become a constant, accompanying the life of the person now accustomed to living with it, making his world more gray and making him lose the many possible opportunities for happiness. A danger in which you fall more often than you think and all due to a basic inability to face it and put it aside, closing a door to move forward. As to why you feel sad there are various studies and reasons from which to draw, certainly among the many there are also the stars that, as always, have their influence, leading people to act differently. So, if there are signs that seem to be able to counteract every dark moment without too many problems, there are others who risk being crushed by their emotions every day. Today, therefore, after having seen together what it is each of us, we will find out how each zodiac sign behaves when it is found to be sad .

This is how the zodiac signs deal with sadness

Aries – With so much apathy
Those born under the sign of Aries usually appear as proactive and constantly on the move. Little prone to sadness, they tend to experience it when they feel particularly tired or unmotivated. Most of the time, therefore, this particular mood overwhelms them after a tantrum or a heavier outburst than usual. Suddenly short of energy, in fact, their anger seems to subside suddenly, embracing various shades of sadness that makes them apathetic as never before, depriving them of their characteristic life force and making them appear apathetic as never before.

Taurus – Closing in on themselves
The natives of the bull feel sadness as something foreign and hostile, from which they try to protect themselves by creating a screen between themselves and the rest of the world and giving it vent trying to satisfy themselves in other ways such as eating kg of ice cream or spending time sleeping. For them, feeling sad is almost a form of defeat in which they feel that the rest of the world is against them. For this reason, their only priority is to isolate themselves in order to vent any negative feeling, discharging all the anger until they finally feel ready to leave more energetic than before.

Gemini – Hiding it with a smile
Gemini find it particularly difficult to live and express sadness. Accustomed as they are to always appearing cheerful or superior to any circumstance or emotion experienced, in front of something as profound as sadness they suddenly feel disarmed and unable to react as they would like. Nonetheless, their first reaction will be to pretend not to feel anything strange, showing themselves as always and giving even more smiles than usual. The sadness that afflicts them, however, will always be there, even if hidden and those who know them well will be able to recognize it through their gaze, darker than usual and their ways of doing that will be less bold than usual.

Cancer – Asking for help and support from others
Cancer natives don’t like to feel sad. Their romantic nature leads them to magnify any negative emotion, making them feel like real victims. This leads them to ask anyone for help, pulling away many tears and negative thoughts that they will not hesitate to share with anyone who decides to offer their help. Their biggest problem is that they often tend to feel heavy and all without realizing it. Which can lead those close to them to distance themselves, thus fueling their negativity and creating a vicious circle from which it will be difficult for them to escape.

Leo – Facing it with the right determination
Those born under the sign of Leo are energetic people and always struggling with something in order to succeed. Sadness, for them, is therefore a negative feeling that they struggle to accept, well aware of how it can slow them down in their race to success. Nevertheless, when they try it, they have the strength to stop and analyze it under every aspect and everything to grasp any weak points on which to leverage. For them, in fact, even sadness is an obstacle to overcome and as if it were an enemy they will try to face it from several fronts in order to get the better of it and return to feel serene as soon as possible.

Virgo – Hiding from the rest of the world
Virgo natives can’t bear to feel sadness. For them it is an incomprehensible emotion and therefore difficult to accept and experience. When they experience it, their first reaction is to distance themselves from others, in order to metabolize everything on their own. Once face to face with their thoughts, however, they will try to understand the origin of their emotions, giving themselves valid reasons not to try them and getting angry with themselves for not succeeding. In short, the relationship they have with sadness is really extreme and negative and because of their attitude it will tend to improve only when it is naturally discharged.

Libra – By Repressing It
Those born under the sign of Libra do not like to feel sad. Nonetheless, they will always try to contain their emotions by giving them vent only when they find themselves in complete solitude. Their rationality and the desire to always have a solution in hand also leads them to try to find something positive in the most absurd situations, which over time leads to somehow distancing themselves from what one feels and thus feeling less and less. dark. Their approach, therefore, although strictly personal and in some ways understandable only to them, seems to have its effectiveness, leading them in a short time to overcome any trace of sadness.

Scorpio – Diving in
The natives of Scorpio tend to experience every emotion in full, letting themselves be overwhelmed. Sadness, of course, is no exception and for this reason when they find themselves experiencing it their reaction will be extreme. Initially, perhaps, they will try to counter it by giving it against, but little by little they will begin to immerse themselves in their feelings, living them to the fullest. This way of acting will lead them to feel sad as never before, so much so that they become even intractable. Once they have dug deep and overcome the worst moment, however, they will return to the surface with more determination than before, ready to face life with positivity and coming out in some way strengthened.

Sagittarius – Looking for distractions
Those born under the sign of Sagittarius are not very prone to sadness, rejecting it in all ways. When they feel particularly out of sorts, then, their instinctive reaction is to find as many distractions as possible in order to keep their mind busy and escape negative emotions. Unfortunately, this way of reacting leads them to often make rash decisions, made in a hurry because of the inner flight they are experiencing. A problem that could be solved by also accepting the presence of emotions that are not always happy but that if well analyzed and addressed can lead to growth and to know each other at 365 degrees.

Capricorn – Thinking about how to get over it as quickly as possible
Capricorn natives hate feeling sad. For them, life is made up of commitments to carry on and happy moments to share with the people they love. Used to always appear cheerful and ready to listen and encourage others, they do not know how to manage the negative emotions that concern them. For this reason, when they find themselves experiencing sadness, the only way they know is that of action. Instead of living and facing sadness, they prefer to distance themselves, trying to find a practical and quick way to make it disappear as quickly as possible, without however bothering to ask themselves the reason for this feeling. A modus operandi that risks making him win the battle but not the war and find himself face to face with the same over and over again,

Aquarius – Escaping it in every way
Those born under the sign of Aquarius are very introspective and led to long moments of solitude in which, however, their prerogative is to relax or recharge by taking a break from the outside world. In reality, sadness is something extremely negative for them that they struggle to deal with in the right way. Whenever they try it, therefore, their first reaction is that of escape, from themselves and from the thoughts they feel. Also in this case they will tend to close in on themselves but not so much to understand what they feel as to bombard themselves with images and sounds able to remove as much as possible the unwelcome sensation they are experiencing. A situation from which they come out with extreme difficulty and which leads them to appear more gloomy and introverted than usual.

Pisces – With extreme anxiety
Pisces do not have a good relationship with sadness at all. Although they are used to living with similar emotions such as, for example, melancholy, when they feel sad they end up becoming extremely negative, seeing the worst of everything and throwing themselves down in an unspeakable way. In these moments, anxiety reigns supreme, getting bigger and bigger. Unless you have extremely positive people next to you and are able to show them the positive sides of everything, the only solution they have is to immerse themselves in their inner world, fully experiencing what they feel until they finally feel free. The proximity of negative people or people unable to cheer them up can in fact have even worse effects, exasperating a situation that is already difficult for them to manage.