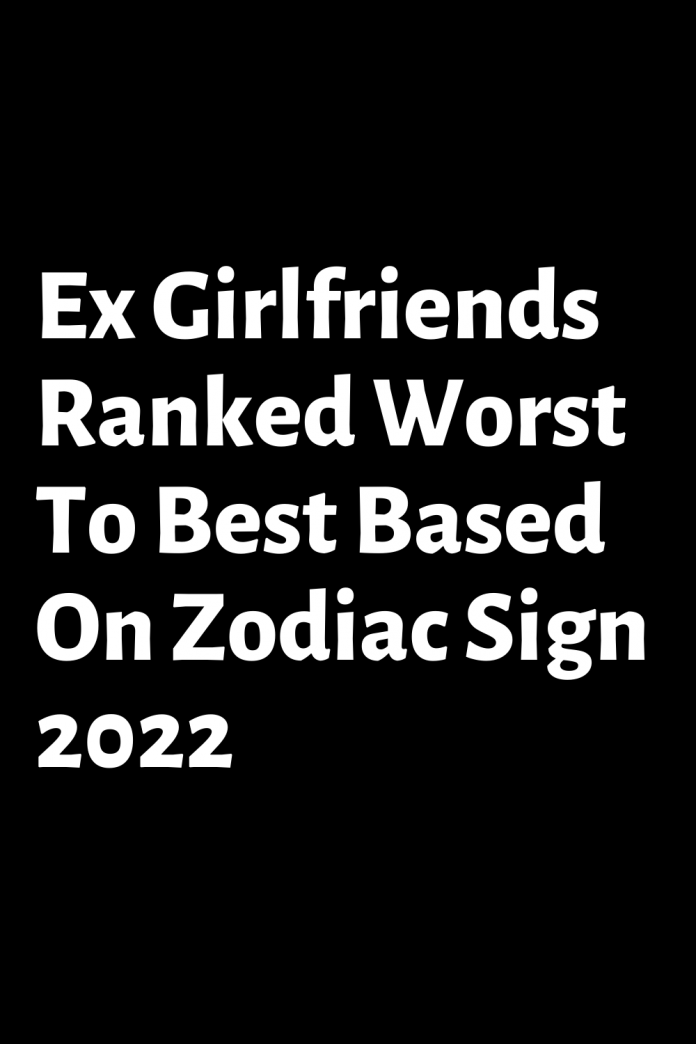 When it comes to ex-girlfriends, the Scorpio woman tops the list of the worst. She is usually very reserved and very protective of her heart when it is broken, so there is no limit to what she is capable of.

The feelings of sadness and pain she feels after a breakup mingle with the feeling of anger, and she feels the need for revenge.

She craves revenge, and she wants her ex to know exactly how it is to feel what she feels.

Needless to say, hell might break loose inside her and her ex will end up regretting what he did.

She is still on the verge of becoming the ex-psychopath who will go and blow her tires, call her new girlfriend to tell her two or three things, post compromising photos on social networks, make a big scene, etc.

Once the anger has dissipated, she turns in on herself and becomes even more cautious than before.

When things don’t go as planned for the Gemini woman, it doesn’t mean any good. And it’s even worse when it comes to breakups.

She’ll want to get to the bottom of it to find out what went wrong and how she could fix it. In general, she is not a fan of breakups, and that does not matter how the relationship was.

She will therefore do everything possible to sow doubt in her ex and convince him to get back with her and start all over again. She will lie and plot even if it takes just to get what she wants.

If that fails, it will change strategy and go into self-protection mode.

Attacking is the best defense, and that’s why Gemini women don’t hesitate to talk trashy about their ex with a dose of exaggeration.

Whether she wants to admit it or not, more than once she will have forced things to make her relationships work.

She enjoys fixing broken things and always sees the good in others, which often ends up coming back to her mind.

Long after her relationship is over, she still hopes things will work out.

She can’t really get over her ex because she is obsessed with him and harasses him through social media or their mutual friends.

The breakups in which she doesn’t really know what the cause was are the worst. She immediately feels that she is not good enough, and she has a hard time getting over it.

A Capricorn ex-girlfriend is neither the worst nor the best. She’s somewhere in between. In fact, it all depends on the reasons that led to the breakup.

If the reasons for the breakup were clear, and they break up on good terms, she’ll be the best ex-girlfriend a man could hope for. She will endure the breakup with dignity, no matter what she thinks.

On the other hand, she can’t stand not being able to turn the page. When the reasons are not clear and obvious, she will want to dig deep into things. She’ll text after text until she gets all the answers.

Before she even realizes it, she’ll have already gone overboard with texting and calling.

Luckily, she has a best friend who’s going to calm her down and make her face reality – that not everything has to have a logical end. This will prevent her from becoming the psychopathic ex-girlfriend.

An ex Virgo will definitely want to make sense of everything. She will go back over her every move, trying to figure out when it all went to hell.

She will be torn between wanting to drown in her own tears and thanking Heaven for saving her from this horrible man. She will go on all of her ex’s social media profiles looking for signs of betrayal.

The worst part is that she is not crazy. She just wants to know the real reason for what happened so she can move on.

The problem with Aries woman’s exes is that they don’t know what they had until they lost her. They learn to appreciate it when it’s too late. By then, the Aries woman has already switched to ‘next please’ mode, and there is no turning back.

Bounce relationships are her thing, and she believes it will be easier to forget about her ex if she has someone else to occupy and entertain her. Is this a good or bad thing to do? The Aries woman will know this soon enough.

The Pisces woman finds it hard to come to terms with the breakup because she’s such a hopeless romantic soul, and the breakup isn’t one of the happy endings of fairy tales. She’s definitely going to pretend to be strong while she’s falling apart inside.

She will withdraw into herself and mourn her lost love quietly at home with Netflix and lots of sweets.

She won’t intentionally seek revenge, but she will likely seek to hurt her ex by showing him that she is doing very well without him (even if she isn’t). And no one can blame him for that.

She’ll also be a little obsessed with why things had to end.

She’ll likely search social media for clues and ruin his careless ex-girlfriend facade by accidentally clicking “like” something he posted 26 weeks ago.

The only time the Libra woman is among the worst ex-girlfriends is when she stubbornly tries to be friends with her ex. In these cases, it only hurts itself and aggravates a situation that is already difficult enough like that.

When there are feelings on one side or the other, it can’t end well. Staying friends with an ex only brings mess and confusion and Libra hates it all.

Fortunately, she is very rational, and once she has some time to think, she will understand that there is nothing you can do against fate.

At first glance, she’s dealing with the breakup very well, despite being the only one who knows what’s going on inside. It’s his outgoing personality and positive attitude that will help him pull through.

She will look like an Ice Queen after a breakup, though it couldn’t be more wrong. In no way will she want to give her ex the pleasure of seeing her depressed.

And all the attention she was giving it, she will redirect it back to herself. She will work on herself, for herself, by herself.

She has a whole support system. She will spend more time with her friends and relatives even though she will never have neglected them during her relationship.

There won’t be a place for her ex in her life, and she will make it obvious by ignoring his texts and staying away from his social media profiles.

Her ex is likely to want to stay friends with her because she’s funny, fun, and a great listener, and he certainly won’t want to lose those things.

That’s why it’s easy for her ex to play the friendship card and drag her into a relationship that will start and break time and time again. Having said that, it’s not something she wants.

She’ll be good at pretending everything is fine, and will do whatever she can to prove to her ex that she doesn’t need him in her life. When in reality, she will be anything but fine, and she would very much like to get back together with her ex.

Since she knows this is not an option, she will pretend until she convinces herself that she is better off without him.

Over time, she came to realize that this breakup was the best thing that could have happened to her.

The Taurus woman hates drama, and that’s just one of the reasons she’s a pretty decent ex.

She avoids screaming and yelling and going back to her ex on nights when they are lonely, and that’s what makes her a smart woman.

When it’s over, it’s over, and there is no going back. She wants to end things with dignity and with her head held high. No matter how much pain she feels, she will stay true to herself.

She’ll cut all ties with her ex, not because she hates him, but because it’s easier for her to get over the breakup that way. And deep down, she knows her ex was “the wrong one”.

When it comes to the Leo woman, her ego will be badly hurt. Her heart will likely be broken, but she will come out like a pro.

A confident, selfish Leo woman will never let anyone call her a pathetic freak.

In general, she prefers not to be friends with her ex because she sees no point in it. If they broke up, that’s where their story ends.

She will delete his number and profiles on social networks, and will even go so far as to block it if it seems necessary.

When she’s hurt, she doesn’t need things that will make her think of what could have been.

Breakups are hard already like that and the Leo woman doesn’t want to make things even harder than they already are.

His behavior in these kinds of difficult situations is rather admirable, as his self-esteem is more powerful than anything else.