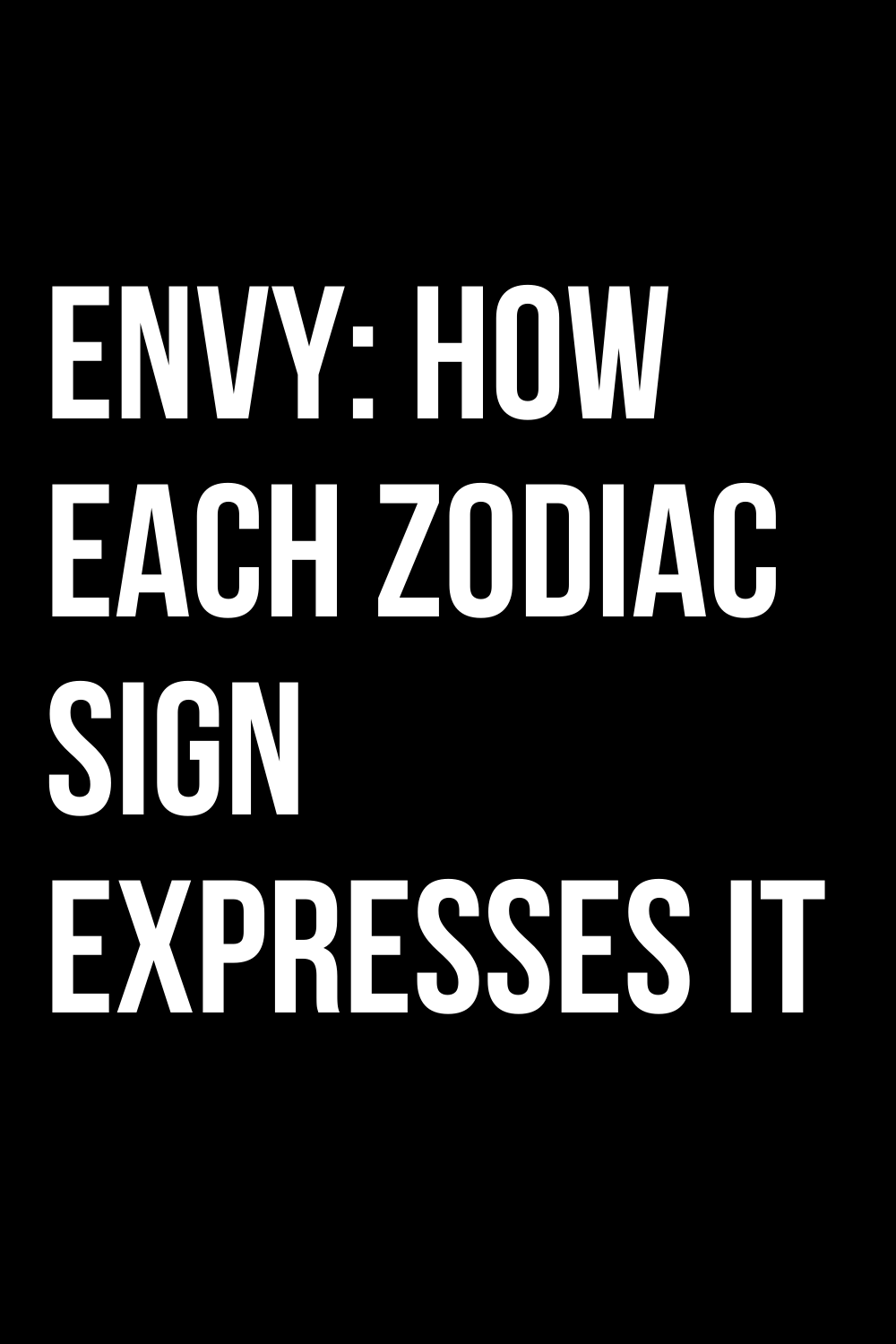 Find out how each zodiac sign proves to be envious. The ways of doing that indicate envy according to the stars.

Envy is a feeling that is most of the time unpleasant both to feel and to receive. It is something that people really struggle to control and that most of the time they deny, just trying it in silence. Although there are both positive and negative envy, the latter is the one that prevails and when it becomes so much it pushes people to act in a senseless way, often expressing the worst of themselves.
Since even this feeling can depend, at least in part, on the influence of the stars, today after having seen how the various signs express jealousy and what is the hot side of each zodiac sign, we will deepen the topic of envy. trying to understand how the various signs show it. To get a clearer idea, since it is something that is extremely related to the way you feel, the advice is to also check the relative zodiac sign profile that you want to check.

Horoscope: how the various signs prove to feel envy

Aries – Putting themselves in competition immediately
Those born under the sign of Aries are people who tend to feel envious of those they consider more fortunate or who, according to their way of thinking, are able to obtain things without too many sacrifices. When they realize that someone has something that they lack, they immediately enter into competition by starting to praise what they have and trying in every way to make their world appear much better. At the same time they try to get what they lack and not so much for a particular desire but because they can’t stand the idea of ​​being outdone.

Taurus – Seeking to Improve
The natives of Taurus are people who are mostly focused on their own lives. For this reason, their envy is usually of a positive kind. Seeing someone who has what they would like, in fact, their first thought is to take action to achieve the same things. It is difficult for them to have negative feelings and unless they have been in negative relationships previously, they tend to admire those who have more than them and not the other way around. Sure of their abilities they are in fact aware that if they want something they just have to get to work to get it.

Gemini – Throwing tantrums
Those born under the sign of Gemini have a funny way of expressing envy. When they try it, in fact, they tend to complain and not hide it in the least, explaining how they feel and why. This depends on their being sincere and open people who do not care much about the judgment of others and for this reason they act freely without hiding anything either from themselves or from others. An attitude that all in all plays in their favor, making them people who are always ready to get to know each other better and improve themselves where they realize they have some shortcomings.

Cancer – Darkening
When they feel envious, Cancer natives tend to be more than noticeably overshadowed. They do this because they suddenly feel uncomfortable and unable to understand how to act on what they are feeling. This creates tension mainly due to their change of attitude which can vary according to the people they are dealing with. When they are in confidence, in fact, they can even reveal what they feel by giving vent to their feelings. Otherwise they prefer to keep everything to themselves, but risking confusing others until the relationship is put at risk.

Leo – Trying to have more
Those born under the sign of Leo are used to working hard to satisfy their ambitions, for this reason when they find themselves feeling envy, this does not tend to last long, avoiding becoming a problem. If they find themselves unable to get to what they want, however, their attitude may change to the point of causing them to move away from those they envy and this is because in their eyes they must always be at the top of the list and above those they know. Having something less than others, in fact, for them is a really intolerable thought.

Virgo – Opening up to criticism
When they feel envious of someone, Virgo natives tend to criticize exactly what they find themselves wanting. They search within themselves for flaws or reasons why a given thing cannot be so good and when they succeed or think they have succeeded, they open up to criticism, regardless of what the other person may feel. It is something they do not so much out of nastiness but to silence the sense of discomfort they would otherwise feel constantly.

Libra – Making yourself thoughtful
Those born under the sign of Libra are people who do not like to harbor unpleasant feelings, so, when they are faced with envy, their first reaction is to look for a solution to the problem. They usually try to make peace with the feeling they have, come to terms with what they can’t have, and when they can’t, they try to find a way to get what they want. In any case, they don’t tend to dwell too much on envy itself because trying it is a sign of defeat for them.

Scorpio – Struggling with yourself
Scorpio natives hate to envy others. In fact, of all feelings, envy is the one they consider the most useless. If they find themselves trying it, they know very well that it is probably because they are not satisfied with their life and this leads them to an inner work in which they are also ready to put in a fight to erase what they feel. Envy itself is therefore the engine to better understand oneself and to find a solution to the problem. Solution that can be represented by a change in the first person such as to make envy itself useless or by an inner path that leads to a change of way of seeing things. What is certain is that they will do everything to ensure that envy will soon remain only a distant memory.

Sagittarius – Getting stuck on what they can’t have
Those born under the sign of Sagittarius are likely to feel envy, especially when it comes from something they lack deep inside. When they find themselves living this feeling they tend to get angry with themselves, getting stuck on what they don’t have to the point of risking becoming heavy. When they enter this perspective of ideas, in fact, they enter a mode so negative that they risk weighing down the atmosphere and the relationship they have with those they find themselves envious of. In short, it is preferable not to arouse this feeling in the natives of the sign because doing so could even compromise a friendship relationship.

Capricorn – Making a Reason
for It Capricorn natives are well aware of the existence of envy and when they experience it they are almost prepared to face it. It must be said that more than facing it, they limit themselves to living it, accepting it as a normal feeling and carrying on their life without particular changes. Even the emotions they feel about it are not so extreme because they are always ready to live with it and, if necessary, to get over it. For them, in fact, what matters most is to carry on the frenetic rhythms that they usually follow and that in this case manage to distract them from problems of various kinds, including envy.

Aquarius – Showing themselves indifferent
When they feel envious of something, those born under the sign of Aquarius find themselves flaunting greater security to which they also combine a semblance of indifference. It could be said that the more indifferent they show themselves, the more envious they feel. At the same time, they are used to living this feeling naturally, aware that, just like the wheel of life, envy is also something that can turn and that one can be envious and envied at the same time.

Pisces – Drawing new ideas
Those born under the sign of Pisces are not prone to envy and this makes them above this feeling that if it arrives it does so in a very soft form and able to push them to improve. When they believe that someone has something more they tend to admire him or take a cue from his abilities in order to aspire to similar results. Theirs is a very different attitude from that put into practice by the other signs and that goes well with their dreamy character and based on being more in the clouds.