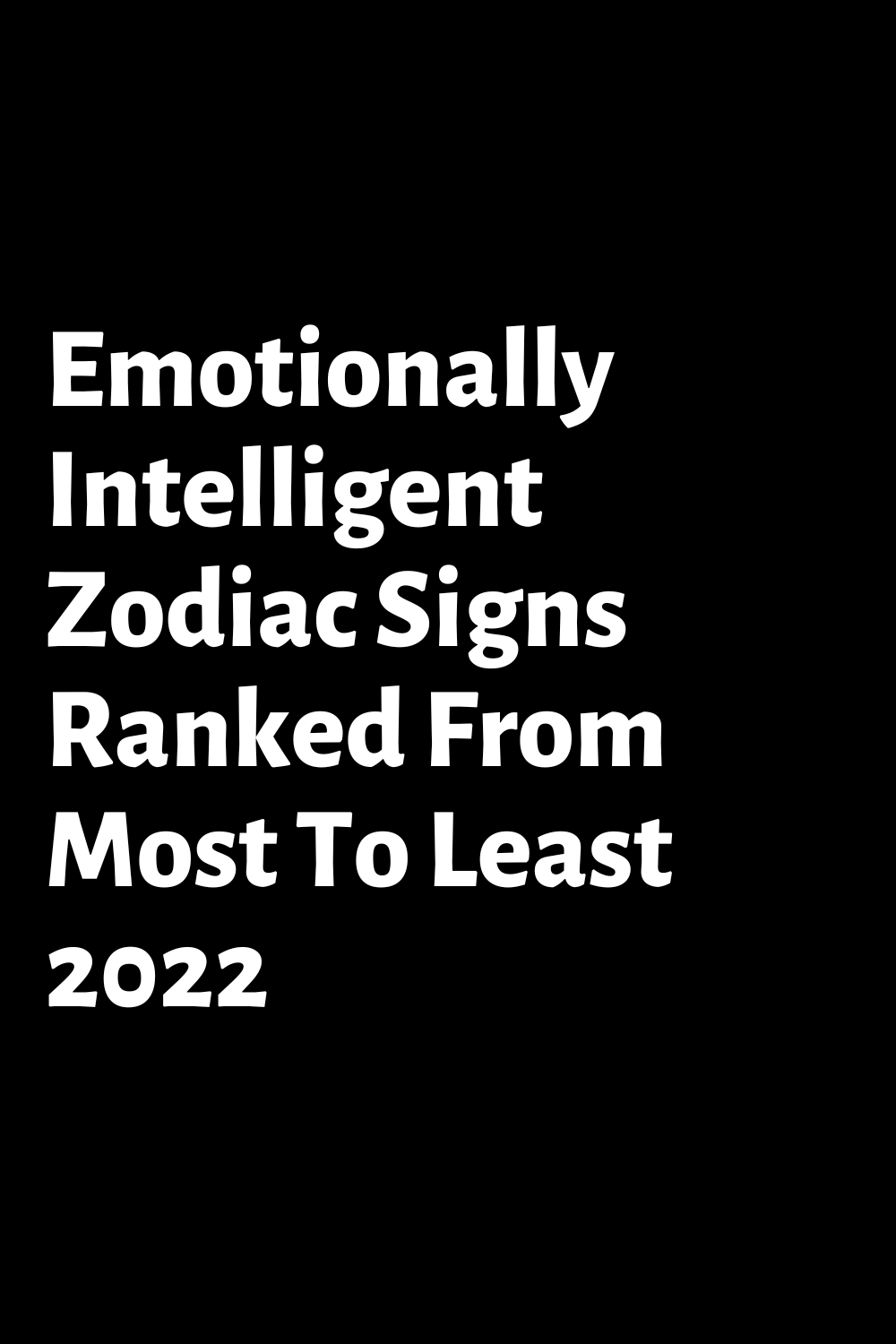 Emotionally Intelligent Zodiac Signs Ranked From Most To Least 2022

The most emotional sign of the zodiac is Pisces. Their emotional intelligence hits the roof and no one is more emotionally intuitive than them.

People born under this zodiac sign are able to process things on a deep level.

Pisces are caring human beings who show interest in the wellbeing of every living soul around them.

If someone is going through a hard time, Pisces will engage in helping him or her, and during that process, they will too feel great emotional pain, even if nothing bad is happening to them.

The second most emotionally intelligent sign is Cancer. Cancers feel deeply and overthink a lot.

Their every thought is carefully analyzed and examined.

By using their emotional intelligence, they make it easier for themselves to assess other people and their emotions in order to help them.

On the surface, they look a lot tougher than they really are. In reality, they are highly sensitive, which gets them easily upset.

These empathetic people feel the pain of others and it hits them hard, as if they are in trouble and not someone else.

They are emotionally intelligent, but only in situations when they are able to make a decision – and that is not too often.

Actually, their emotional intelligence is especially noticeable because of their inability to make a decision.

Only then are they able to make a decision. If they make the wrong one for some reason, it will definitely trouble them a long time.

Sometimes, that is the reason why they get stuck in the past, unable to let some things go.

Gemini are unable to keep their emotions under control. If they get upset by something, everyone will notice it.

Even if they try really hard to hide it, their worry, disappointment, or anger finds its way out.

They tend to overreact by taking responsibility for people’s discontent and disappointment.

If they are hosting a party and some are not happy, a Gemini will blame themselves for not doing a good job.

Their emotional intelligence is visible in their linguistic and listening skills.

If someone needs a shoulder to cry on and a person to listen to them, then Gemini is definitely the best go-to person.

They know how to read body language and they notice emotional chaos from a mile away.

Virgos are highly analytical and less emotional. Usually, this means, they rather lean on their analytical side, relying on actual evidence, than the emotional one, guided with feelings only.

With that being said, their emotional intelligence is higher than it seems.

Considering they are highly critical of themselves, they beat themselves up when they fail.

This is a sign of emotional intelligence; however, no one can tell for sure if they are aware of what they are actually doing.

Virgos know what their priorities are and they will put all of their energy into making things they feel are worthy come true.

Sadly, they are not at the top of emotionally intelligent signs because when they fail, they beat themselves up instead of trying to use their failure to do something even better.

It is said that the water signs are the ones who are the most emotionally intelligent, but Scorpio stands out a bit from this equation because of the one little thing – vengeance.

The ability to let go of the past is one of the most important features of emotional intelligence, which Scorpios unfortunately don’t possess.

Scorpios wear their hearts on their sleeves.

It’s not a big deal for them to show their vulnerability, but they are in the constant fear that someone will use their “weakness” against them.

If it actually happens – if someone takes advantage of a Scorpio – they will never stop haunting them. At least, not until they get adequate revenge.

Other than this tiny obstacle, Scorpios are quite emotionally intelligent.

Capricorns don’t have time for emotions. They are not exactly the person you want to go to when you’re feeling down.

It’s not that they don’t care, it’s that they prefer talking about facts and having a plan.

They will give you advice and tell you exactly what to do, but they will also lose patience and leave if you don’t listen to them right away.

So, Caps are somewhere in the middle of the emotional intelligence scale.

Taurus are problem solvers. They have an empathetic side, but they keep it hidden.

Whenever someone comes to them with a problem, they will definitely do their best to give them a solution.

The problem is, that Taurus don’t know how to put themselves in someone else’s shoes and they will give advice regarding their own mindset and viewpoints.

When someone else won’t listen to what they are suggesting because it doesn’t agree with who they are, Taurus will back down and leave them alone.

As already written, their inability to put themselves into someone else’s shoes robs them of their emotional intelligence.

Leos are more egoistic than emotionally intelligent, but don’t get me wrong.

They are sensitive and emotional, yet only in situations when they truly care for someone.

The person who captures their attention can get everything they want from them.

Sadly, when it comes to other people they don’t care for or give a crap about, they will not move a finger.

Emotional intelligence involves self-awareness and recognition of your own weaknesses and strengths; Leos don’t possess that.

They are always extremely confident and they are used to being in the spotlight, thinking they are the best and no one can do anything better than them, which is not true.

These people are not that emotionally intelligent because they are loners.

They prefer to do things solo and big crowds of people don’t interest them much.

Because of that fact, they can’t even grow understanding and empathy for others – they are simply not at the same place with the same people long enough to really get to know them.

Emotional intelligence is about caring for others and showing empathy, and all of that is not Sagittarius.

They act in the spur of the moment and they don’t care about their own feelings, let alone someone else’s.

Sagittarians are not stupid when it comes to feelings, they just choose to ignore them.

Aries like confrontations and they never hold back if they have something to say.

This usually results with hurting someone, which leads to the conclusion that Aries don’t care particularly for other people’s feelings, ultimately meaning they aren’t emotionally intelligent.

They are always rushing into things, being too busy to stop and think about how someone else is feeling.

They take action without thinking it through first. Their adventurous lifestyle is not a fertile ground to grow an emotional relationship.

Aries love to be leaders and if that means to step over others, they will do so feeling no regrets whatsoever.

So, as far as emotional intelligence goes, Aries have none.

Regarding emotional intelligence, they are definitely at the bottom of the list and it’s not because they don’t have any, it’s because they are scared as hell of emotions.

They would rather go bungee-jumping than express how they really feel about something. They are emotionally disabled; it’s that simple.

Instead of expressing themselves with feelings, they rather choose to express themselves intellectually – and it’s true!

It is said that Aquarius are the most intelligent sign of the zodiac.

As they loathe admitting how they feel, they hate being around someone who is in touch with their emotions, too. To them, emotions can’t rule over reason.