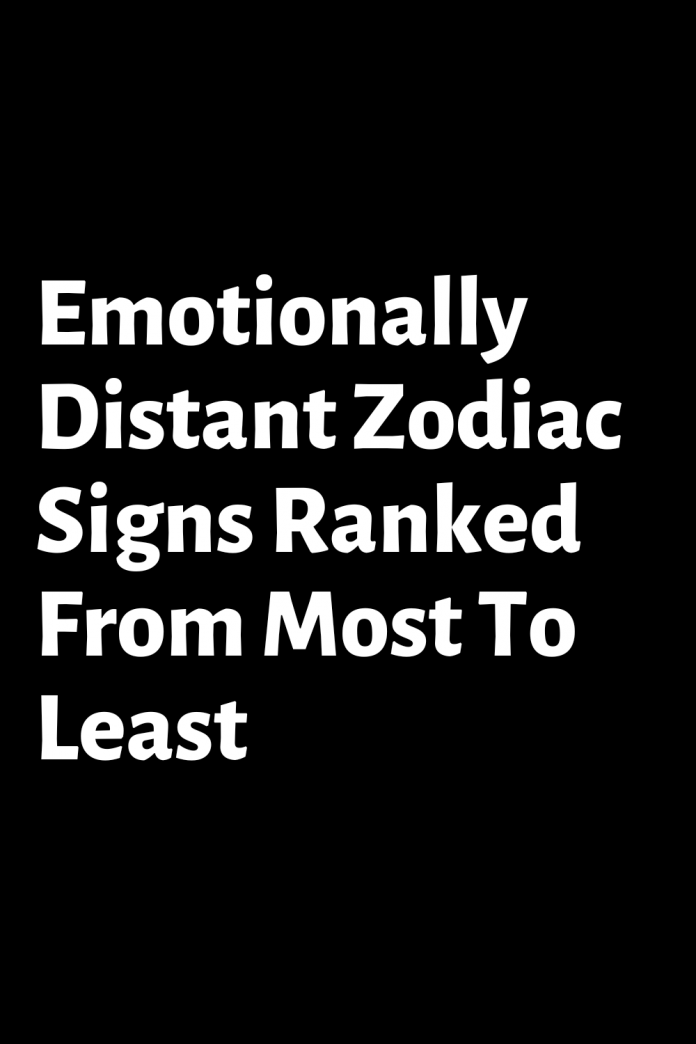 People act emotionally distant for different reasons: some are scared of getting their heart broken and some are simply just that way.

However, what you might not know is that your emotional availability has a lot to do with the zodiac you belong to.

That is why we are here to give you the ultimate list of emotionally distant zodiac signs ranked from most to least.

Virgo is the sign which has the most trouble trusting new people.

They are often perceived as cold and guarded, without letting just anyone approach them.

Of course, this behavior of theirs makes a Virgo’s partner often feel emotionally neglected and not loved enough.

However, this doesn’t mean that people belonging to this zodiac don’t have the ability to love.

They just need to see that their partner is worthy of seeing their vulnerabilities before they expose their true self.

Another zodiac which is at the top of the emotionally distant signs is without a doubt Capricorn.

This is one of the signs who simply enjoys being on their own and who don’t need their partner to complete them.

Even though this is a good thing which prevents them from ever becoming emotionally dependent on their partner, at the same time it often makes them appear emotionally unavailable, which is anything but a desirable trait.

Even though you would never guess this about them, the real truth about Geminis is that they are terrified of rejection.

They can’t stand allowing someone to play them for a fool or to take advantage of their feelings.

This is why with time, people belonging to this zodiac master the art of hiding their true emotions and masking them with irony, sarcasm and humor.

Aquarius is someone who needs time to become relaxed enough in front of the other person to show them their true colors.

However, underneath this cold exterior, there hides a caring heart, full of love.

An Aquarian’s overly-careful attitude is nothing but a shield they use to protect themselves.

They use it as a filter to see who is patient enough to win their heart over and to prove to be worthy of their love.

One of the preconceptions regarding Aries is that they are selfish and self-centered.

In reality, the truth is that people belonging to this zodiac are actually nothing but ambitious and focused on their goals.

Of course, in this chase for success, they sometimes forget to dedicate their time and energy to their loved one, which often makes them appear emotionally unavailable.

Leo’s emotional availability depends on the amount of devotion their partner puts into the relationship.

Their ego could never stand being the one who cares more, so basically a Leo will give you as much love as they are getting from you.

What Librans fear the most is becoming too needy and overly attached to their better half.

The last thing they want to be perceived by their partner as is desperate so they prefer taking it slowly when it comes to showing their true emotions.

Even though Scorpios have a reputation that all they want from a relationship is just s’, the truth is quite different.

Yes, Scorpios crave intimacy but they are not interested in only physical intimacy.

Instead, what this sign is looking for is someone whom they can bond with on a much deeper, personal level.

One of Sagittarius’s biggest fears is committing to the wrong person and giving their heart to someone who doesn’t deserve it.

So, if you feel that your Sagittarian partner is emotionally distant, I have some bad news for you—you are not the one for them.

Of course, all of this changes once a Sagittarian finds someone they think is worthy of them completely opening up.

Pisces is one of the least emotionally distant zodiac signs. These people are known to be clingy and have a constant need to be around their partner.

Pisces will shower you with emotions and show you the type of love you never even thought of being possible.

The only thing you have to do in return is not take them for granted and instead appreciate everything you’ve been getting.

Similar to Pisces, Taurus is also known to be one of the most emotionally available zodiac signs.

They are the ones who wear their heart on their sleeve, even though living like this brought them much trouble in the past.

People belonging to this zodiac crave finding their match made in heaven—someone who is just like them and who knows that a relationship can’t be healthy or successful without emotional intimacy.

Without a doubt, Cancer is the most sensitive zodiac sign and the one whose heart can be broken the easiest.

But not only that—they are also the biggest empaths which makes them in tune with other people’s emotions and their own, which they don’t have any trouble expressing.