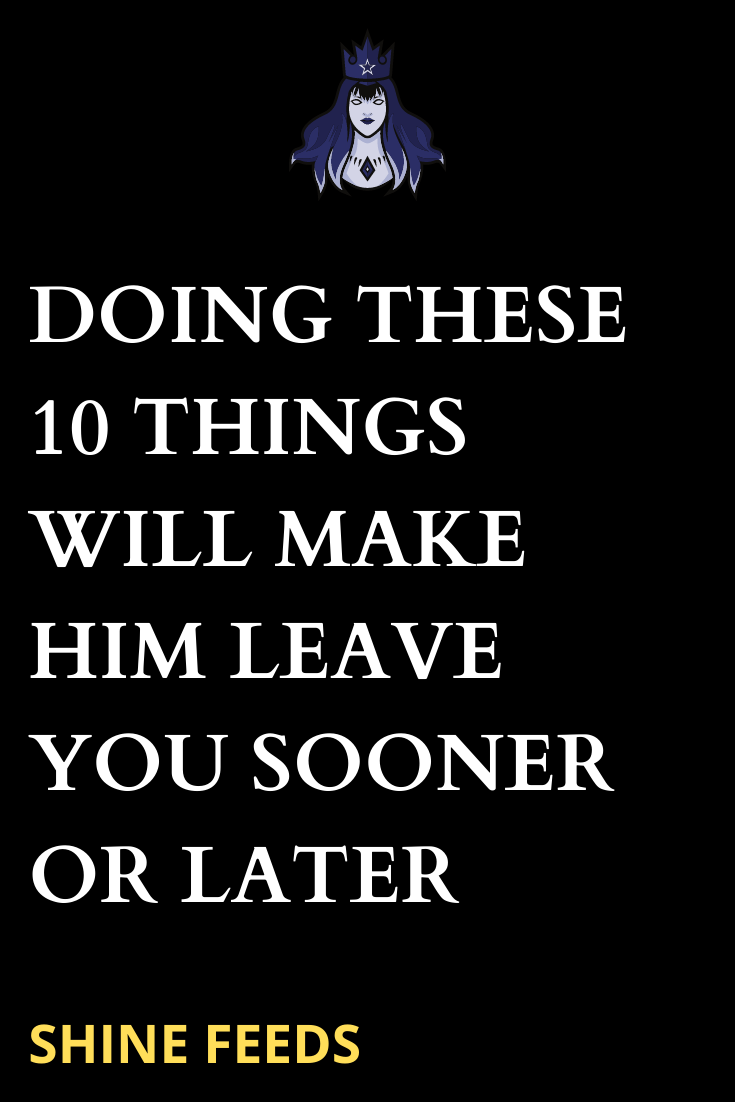 Do you have a feeling that your man has become a little bit distant lately? You try and try, but you just can’t find a reason why you’re slowly growing apart?

Love is a very fickle thing. Sometimes we do something for someone we love in their best interest, but unfortunately, sometimes, those things end up ruining the closeness we had with that person.

Some things that sound very natural and perfectly right for us may sound the complete opposite to our loved ones.

Listening to your heart and choosing to go with the flow is okay, but sometimes it’s necessary to think through some of your decisions before putting them into action.

Even though you managed to seal the deal and you’re in a relationship with the man you love, that doesn’t mean he’ll never leave you.

Trust me, even if he deeply and truly loves you, some of your toxic relationship habits and behaviors can easily push him away.

I agree that we all have unhealthy habits that most of us aren’t even aware of, but you should pay attention to these little toxic habits below and try to fix them before it’s too late, before they cost you the man you love.

Creating drama out of nothing

Come on, let’s be honest and admit that all women like to create unnecessary drama from time to time just to shake their relationships up a little bit.

Even if it’s sometimes fun, you have to learn to silence that inner drama queen because if you allow her to appear too often, she’ll drive your man away.

I know that you want to be in touch with the man you love 24/7, but it’s not possible.

If you check-in with him every hour, asking him where he is and what’s he doing, he’ll only get bored of you, and you’ll seem desperate in the end.

It’s perfectly normal for you to want to text him about his day or maybe tell him about yours, but constant check-ins are wrong and toxic. Nothing will push your man away faster than this.

Snooping through his phone

If you don’t have reasons to doubt his fidelity, stop trying to find one so desperately.

I know that you’ve probably been hurt in the past, but he shouldn’t suffer because of someone else’s mistakes.

Even if you have reasons to doubt his loyalty, it’s still not a good enough reason to go snooping through his phone while he’s taking a shower.

Confront him about your doubts and if you really want to check his phone, ask him to give it to you. If he doesn’t have anything to hide, he’ll gladly do it.

Comparing him with your ex

You know how their male egos are of huge importance for every man? Well, comparing him to your ex is how you’ll hurt his ego the most.

To be honest, it would hurt all of us. The fact is that if your ex was good to you, you would still be with him, so stop contradicting yourself.

You try to make important decisions for him

If you two are in a good and healthy relationship, he should include you in his decision-making process.

He should appreciate you and your opinion, and he should consider you every time he has to make important decisions.

However, it doesn’t give you the right to interfere in all spheres of his life. He’ll let you in those spheres he wants, but if he wants to separate his work, for example, from his love life, you should respect his decision and stop interfering in it.

You proclaim yourself as his personal spokeswoman

If he disagrees or quarrels with some people, remember he should fight those battles alone. You shouldn’t interfere because he definitely doesn’t want you.

You’ll make him look weak in front of other people, which will hurt his ego and make him think less about himself.

You’re his better half, lover, and friend; he definitely doesn’t need you as a personal spokeswoman.

It’s vital for a healthy relationship for both partners to have a personal space. If he wants to be alone sometimes, you should respect that. Also, intruding in the bathroom while he’s inside is way out of line.

I can’t say that women are more jealous than men, but I think we are more prone to making hasty and irrational assumptions when we get jealous.

That’s exactly why healthy communication is key to a successful relationship. If you have any reason to doubt your man, you should talk it through with him.

The lack of self-care will definitely drive him away

Most women neglect their self-care a little bit when they’re in a long-term relationship. And to be honest, that’s a huge deal-breaker for every man.

Asking for too much, too soon

I know you’re sure of your feelings, and you really think he’s the one, but that doesn’t mean you should be dropping hints about putting a ring on your finger way too soon.

Men are very delicate when it comes to those serious obligations. Before he makes such a huge and serious step, he’ll want to be sure you’re the right one.

But if you continue to drop hints about it everywhere, you’ll only scare him away.

Don’t do something you’ll regret afterward. Everything comes right for those who know how to be patient and wait, trust me.