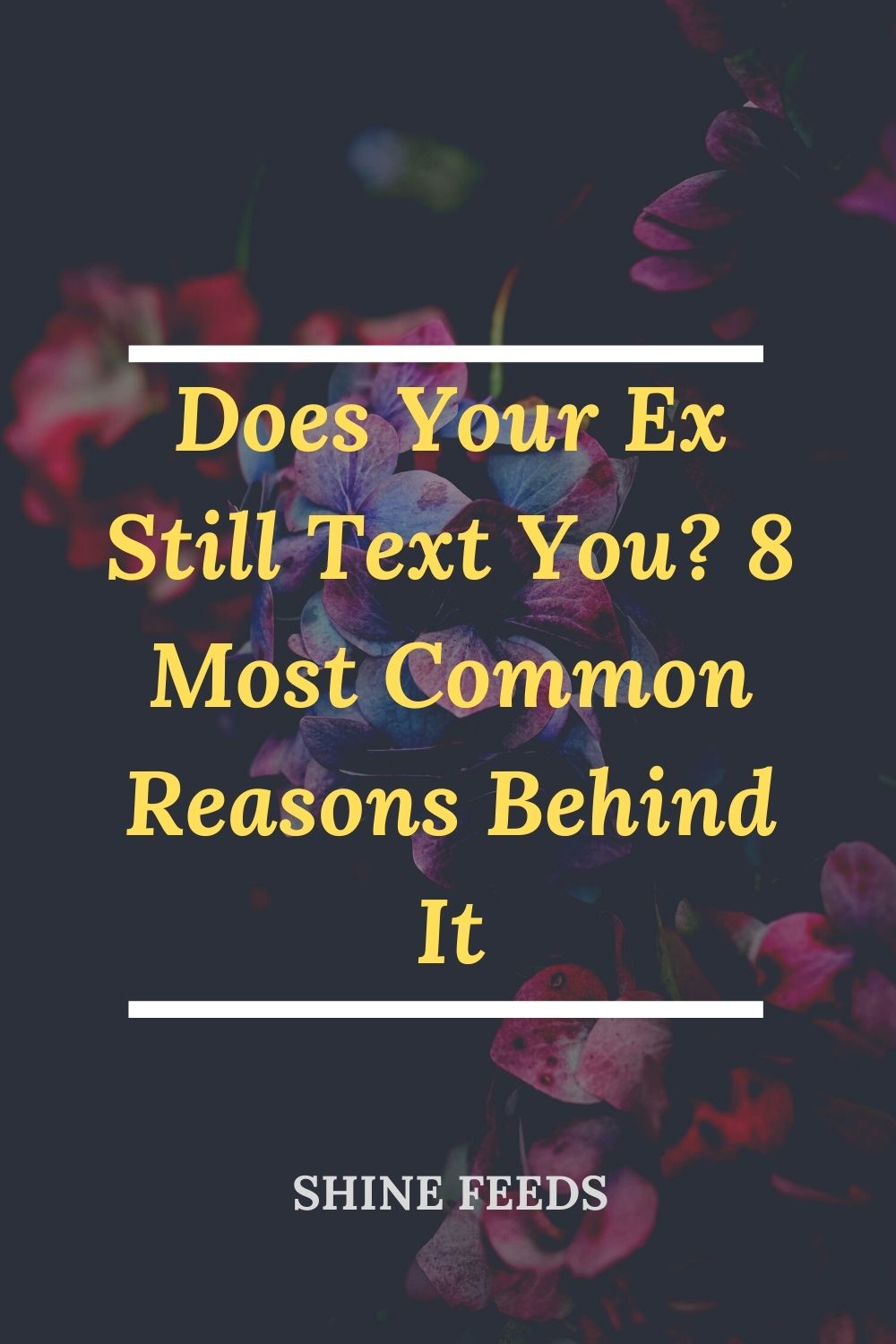 After countless nights of crying your heart out, you finally start to feel like it’s getting a bit easier, that you are healing, and at that exact moment, you get a text from your ex and it takes you right  back to the start.

Your emotions are stirred. Your brain is running millions of different scenarios.

You are kind of happy, but at the same time, it hurts like hell.

You don’t know what to do, to text back or not.

You wonder what he’ll think if you do, if you don’t, and you don’t know what he is trying to achieve with texting you at all.

Why do men do that? Why do they text once you’ve finally made peace with the fact that it’s over?

Why do they reappear when you least expect them?

Why do they have a habit of reaching out after a year or even a few years when you are completely over them?

The relationship ended. You parted your ways.

He might have even emphasized that he would never call or text, and then he does it again. It just doesn’t make much sense, right?

We wanted to get to the bottom of this messed-up situation and see why our exes send texts out of the blue.

Keep in mind that the reasons which apply to you depend on the circumstances of your breakup and the things that happened between the two of you.

He feels guilty for how everything went down

If your ex did something terribly wrong that caused your relationship to break, his conscience is eating him alive.

He can’t help but apologize non-stop and try to get on your good side again.

If you still have feelings for him, be very careful—not all things should be forgiven and not everyone deserves a second chance.

Think about everything rationally, and make a decision that best suits you.

He has a strong habit of texting you

In his mind, he knows that the relationship is over, but the force of habit is so strong that he can’t help but text you.

He is used to hearing from you, wishing you a good morning, and sharing things with you.

He misses the friend he had in you.  This usually happens after long-term relationships end.

He wants to get into your pants

Sadly, this is one of the most common reasons regardless of the reason for your break up. He knows you, your body.

He misses your moans. The way you move feels comfortable for him.

If you used to share strong chemistry and sparks were burning between you from all the s*xual tension, it will be hard for you to resist.

At least try to be stronger than your carnal desires.

S*x with an ex is never a smart idea, and you will feel lousy in the morning when he leaves again, and you realize that you didn’t get back together.

You just had a one-night-stand with somebody that you used to know.

He needs an ego boost

Some men, especially the ones who are self-absorbed—for instance, narcissists—get a kick out of seeing that they can lure you back any time they want.

They feel big and powerful because of it.

Don’t grant them that pleasure. Don’t allow anyone to think that they can come and go from your life as they please. Your heart deserves more.

Loneliness can be a powerful trigger for your ex to contact you.

If he has friends that are coupled up, he will miss that feeling of having somebody to turn to and spend days cuddling with.

Love should be the thing holding you together, not loneliness. Don’t allow him to enter your life under false pretenses.

He is keeping you on the bench

He sends texts for a few days in a row. Then he disappears or he checks up on you every now and then.

He wants to maintain contact and keep you as an option for when he finds it convenient.

It’s better to go no contact than keep on texting a guy who is keeping you on the bench for times when he has nothing else going on in his life.

He heard you are in a new relationship

The hardest thing for your ex will be to see you happy in the arms of somebody else.

He might become aware of everything he had in you and lost.

The sole fact that all the love, attention, and affection that was at one point his is now somebody else’s will drive him insane with jealousy.

If he didn’t know how to value you when you were together, you don’t need him to do it now either.

He is too late, and it’s time he allows somebody to make you happy like he never could.

He actually misses you and wants you back

Sadly, some men just don’t know what they have until they lose it completely.

He took you for granted, and your absence made him realize what a great thing you guys could have had if he had known better.

If you feel the same and if he has done something that you can forgive, think about giving him a second chance.

Remember, every chance after the second one is one too many, and there are guys who don’t deserve anything from you after they completely ruin the first chance.

Make sure he makes extra efforts in winning you back and not just some lame texts. He has to be worth the risk.