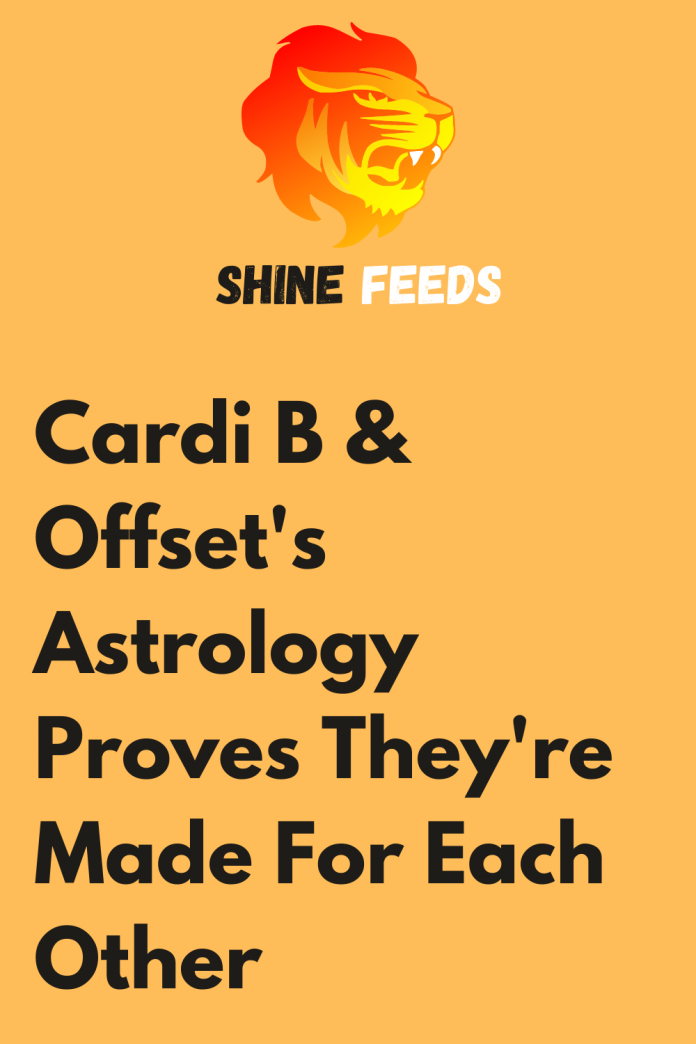 Throughout their highly publicized romance, Cardi B and Offset have had their fair share of relationship drama. But since the rumors about these two getting together in 2017 first broke out, they’ve been open about their issues. Despite reports of infidelity afflicting their on-again, off-again relationship, there doesn’t seem to be a shortage of forgiveness between the two — they somehow always work through their differences.

So, what does astrology have to say about their passionate romance? Neither rappers have their recorded birth time online, so their rising sign or where their houses lie is unknown, but there’s still a ton of information on the couple to read into their cosmic compatibility. Below, astrologer and transformation expert Kim Woods digs into the astrology behind Cardi B and Offset’s whirlwind romance.

Our sun signs are one of the most important parts of our chart and symbolize our core being. Cardi B (born October 11, 1992) is a romantic and luxurious Libra. These signs are known to be socialites who thrive around other people and love to love. Offset (born December 14, 1991) is an adventurous and passionate Sagittarius, a sign that’s notorious for their optimism and ardent personality.

Just by looking at Cardi and Offset’s sun signs, these two have hot chemistry and aren’t shy about it, either. “She has a cardinal birth chart and she has a Grand Cross, which means that she is all about opposition and squares,” Woods tells Bustle. Along with planetary placements in astrology, your birth chart holds information about the different relationships between those planets called aspects. Cardi’s chart is amassed with oppositions — which happens when two planets are at 180° opposite of one another and represents the challenge of those two planets finding harmony with one another. “She’s fiery and she wants to know the meaning of life. She wants to be a student of it all.” And one of the reasons Offset is so magnetized to her is likely because he’s a thrill-seeking Sagittarius.

“This is a soulmate attraction.”

He’s also more sensitive with his moon in dreamy water sign, Pisces. “Offset has a much softer chart than Cardi B. Sagittarius is fiery and Pisces is watery. He has the ability to be larger than life and adventurous.” Meanwhile, Cardi’s moon sign is in firestarter Aries. It might sound like there’d be friction between their emotional responses, but often times it can indicate a steamy relationship. A fire moon can learn a thing or two about sensitivity, and a water moon can absorb the fire’s tenacity when dealing with difficult feelings. Despite the duality of their moon signs, there’s an obvious attraction between the rappers that transcends the surface. “His sun in Sagittarius illuminates her soul destiny,” Woods says. “This is a soulmate attraction. He’s fascinated with her and all of her zest for life, and she’s inexplicably pulled toward him.”

As for their shared Venus sign in Scorpio, that’s a huge indication for hot, s_xy romance. Venus is the ruler of all things romantic and harmonious, and Scorpio is mysterious, edgy, and sensual. When you have a water sign in your planet of love, there’s lots of sensitivity in that arena. “[Cardi’s] got huge magnetism with her Venus in Scorpio conjunct Pluto,” says Woods. When Venus, the planet of harmony and balance, joins Pluto, aka the governor of change and rebirth, in emotionally charged Scorpio, it can show persistent and intense challenges in love, but it also shows a deep need to feel connected in their relationships. “She’s wildly charismatic and wildly magnetic, and we know that by what she’s doing in her life. Yet intimacy is a big deal for her. There’s wounding in her chart, and she desperately wants to have a soulmate relationship.” This emotional wound in Cardi’s chart represents the intense longing for an intimate connection paired with an immense fear of abandoment is all too familiar with those who have that Venus conjunct Pluto in Scorpio. Because of Scorpio’s tough exterior and resistance toward vulnerability, this is the kind of deep craving for intimacy that sometimes feels impossible to satisfy.

Sagittarians are always on the hunt for excitement and Libras love the lavish life, making for a perfect cocktail of big romantic gestures and fiery passion. “Their love life has all the indications of being spicy and lively with their combined planets, Sun, Mercury, Venus, and Pluto in Scorpio,” Woods adds.

Obviously, there’s no question as to whether Cardi and Offset have cosmic chemistry — the real question is whether they’re fated in stars.

Cardi B is clearly the bold type. She’s not afraid to be vulnerable in front of the world — something that can be admired by anyone, including Offset. While Offset is grounded, he wants to be recognized by the world around him. We can see this in their Mars signs, which differ completely. Mars is the ruler of power and aggression, so it’s basically how we assert ourselves and hold our own. Cardi’s Mars sign is in ultra-nurturing and sensitive Cancer. In this case, she might take things to heart when she’s not being taken seriously.

On the other hand, Offset’s Mars sign is in the bold and ambitious sign of Sagittarius, who values the freedom to explore and wants to be noticed for their hard work and intellect. “Cardi wants to plan and have everything figured out, and that’s not particularly important for Offset when he feels connected and secure. He wants to be seen in the world and to be a recognized leader,” says Woods.

The conflict doesn’t stop there. Cardi’s Jupiter sign is in Libra. Jupiter represents our purpose and personal philosophy, so we can see she sees an incredible significance to finding harmony and balance in all aspects of her life, which can also pose as a problem when not executed properly. “Work-life balance may be something of an issue,” Woods says. “Cardi’s chart implies she might struggle to balance her inner life with her outer world. She desires to be a student of life through travel, socializing, and grand adventure.”

They’ve also got shared planets in the outer realm of their chart. “Like Cardi B, Offset’s got his outer planets in the same signs — Pluto in Scorpio and Neptune and Uranus in Capricorn with the conjunction of the 1991 timeframe.”

Pluto is the planet of rebirth, Neptune rules over mystics and delusion, and Uranus symbolizes disruption. These planets moving in synergy can be a great thing since they share a lot of the same values. “They may be confused about how to perceive themselves in the world, but have huge dreams and convictions. They want to live up to their own expectations,” says Woods.

Both Cardi and Offset have a ton of differences in their chart that complement each other for the most part, but a chunk of conflict lies in what they have in common. “Both Cardi B and Offset are in their Saturn return time, even though it’s not exact,” says Woods. Your Saturn return in astrology — which is a planetary occurrence that happens at ages 27 to 30 and symbolizes the intense and pivotal transition in adulthood — takes place roughly every 29.5 years. During this time, we’re shedding the skin of our youth and moving into a different phase of adulthood.

Since both rappers are in the thick of these growing pains, you can expect there to be some conflict as they’re discovering new parts of themselves. That’s not to say they can’t work through their differences. But being in this phase of life, where you’re figuring out what you want and getting acquainted with the person you’re becoming, can be particularly daunting for those who are in the limelight. “They have serious, long-term commitments on their minds. It’s in their DNA right now, and it shouldn’t be a surprise if they make a commitment to each other,” says Woods.

The Verdict On Cardi B & Offset

For the couple, there’s a bit of conflict that lies in striking a balance between their internal and external parts of themselves. In other words, making their romance, personal endeavors, and career harmonize together is a lot harder than it looks. “From a shared perspective, Cardi B and Offset have a wildly magnetic and transformative impact on the world,” Woods says. “The work-life balance is a huge conflict for them.”

The couple has shown the world the lengths they’re willing to go to nourish their relationship while growing into their authentic selves. Whether they’re able to overcome their differences and cosmic struggles is written in the stars, but by the looks of their planetary alignments, there doesn’t seem to be a question to the power of their celestial bond.