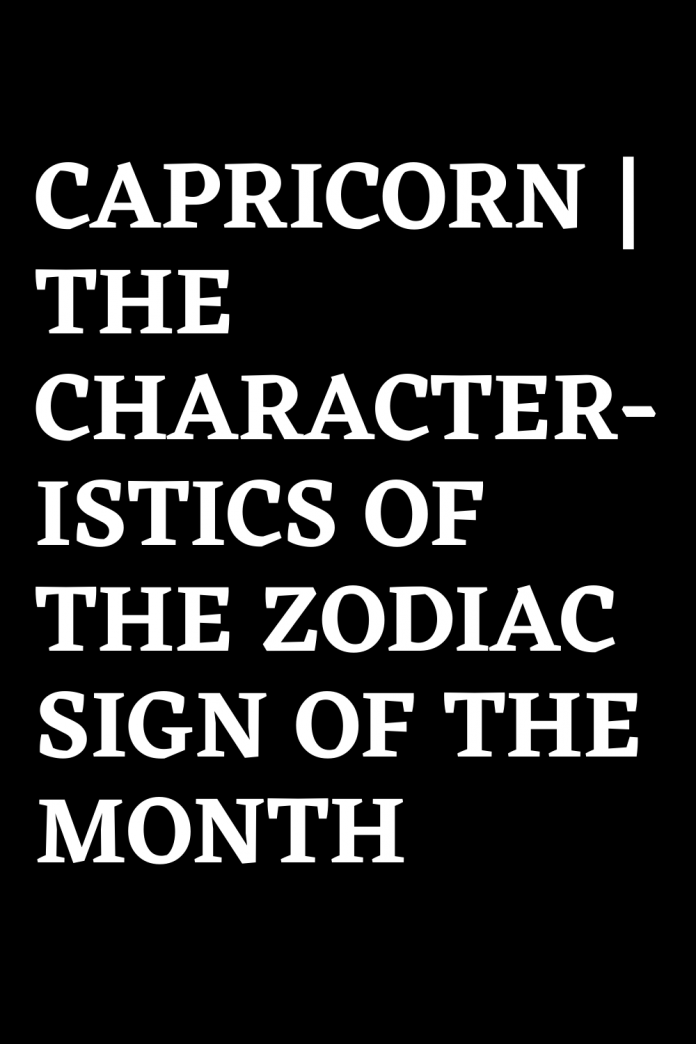 Let’s discover all the characteristics of the zodiac sign of the month: Capricorn.

Today December 22, we officially enter the month of Capricorn, the tenth sign of the zodiac. Let’s find out together what are the characteristics and curiosities that belong to people born under this zodiac sign which is the one that comes before Aquarius and after Sagittarius.

The zodiac sign in general
Capricorn is the tenth sign of the zodiac. The natives of the sign are people who have great ambitions and therefore love to dream big. Very good at designing, they tend to struggle a little when it comes to putting their ideas into practice and this is because they often make programs that are difficult to carry out.

Bold and at the same time endowed with a certain common sense, they always manage to stay in balance between what they want and what they have to do. In this regard, the natives of the sign are always ready to get involved and to invest most of their energies in everything they do. Cheerful and spontaneous, they have their vision of the world that is often more idealistic than they think and this leads them to collide many times with a reality that risks not being to their liking.

At the same time, they know how to manage very well everything related to practices to be dealt with or decisions to be made and when they are cornered they give their best, churning out plans and solutions that in more relaxed times they would not even contemplate. After all, being under pressure is something they don’t mind and for this reason, they often make more commitments than they can follow. One thing that stresses them most of the time but at the same time makes them feel incredibly alive. Sometimes cold towards those who do not know well, they tend to prefer special relationships that they like to establish with people they consider similar.

Work, success, and professional relationships
Those born under the sign of Capricorn, in some ways are married with a sense of duty that they always put in front of everything but that is also one of the reasons why they manage to be easily successful in life. When they have a project in mind, they work until it is reached and they know no pauses or tiredness. They leave as direct trains and go straight on without asking questions. A way of doing that sometimes leads them to have a more limited vision of things and that instead, confronting the world they could expand, even obtaining new ideas to improve themselves.

Beyond the work they do, the relationship with any colleagues is always based on cordiality that they know how to manage well. More than eager to make a career, they know how to manage leadership roles well, earning the respect and sometimes even the envy of those around them. The truth is that their way of living work is hardly understood by others who, more often than not, find the attention they put into every detail exaggerated and this even if in the end their way of acting almost always leads them to obtain what they want.

That said, they work better on their own and this is because they love being able to manage their times alone. In doing so, however, they often risk putting everything else aside, concentrating too much on work, which perhaps plays too important a role in their life. An aspect that they would do well to take care of both for their health and to maintain a certain basic harmony with the people they love who therefore need their attention.

Interpersonal relationships and feelings
While they love the idea of ​​having special relationships with the people they care about, those born under the sign of Capricorn tend to appear cold and serious at first and for this reason, they do not always manage to make friends easily. However, when they meet someone on the same wavelength as they do, things change and their openness becomes more perceptible, giving rise to relationships that can also become important over time.

Excellent confidants, they know how to listen and love to advise that most of the time they would never follow but that they know how to get there in a rather credible way. A feature that makes them people often sought by others, both for advice and to spend time together. When they want, in fact, the natives of the sign also know how to be a company, making them pleasant and even able to enliven an evening with friends.

The relationship they have with love is quite difficult. Distrustful by nature, they take a while to open up, and more than chasing they love to be chased, often even testing the person they think might interest them. To be conquered they need to feel courted and appreciated and to find someone who knows and wants to listen to them. However, they have personal needs that they often look for in others and among these, there is security, both emotional and economic. One thing that is essential for them is to feel serene.

That said, they remain fundamentally independent people, in need of a certain personal freedom and ability to leave their spaces to others. Feeling suffocated or suffocating is the last thing they want and a component that usually pushes them to distance themselves. First of all, they are people who need to feel good about themselves.