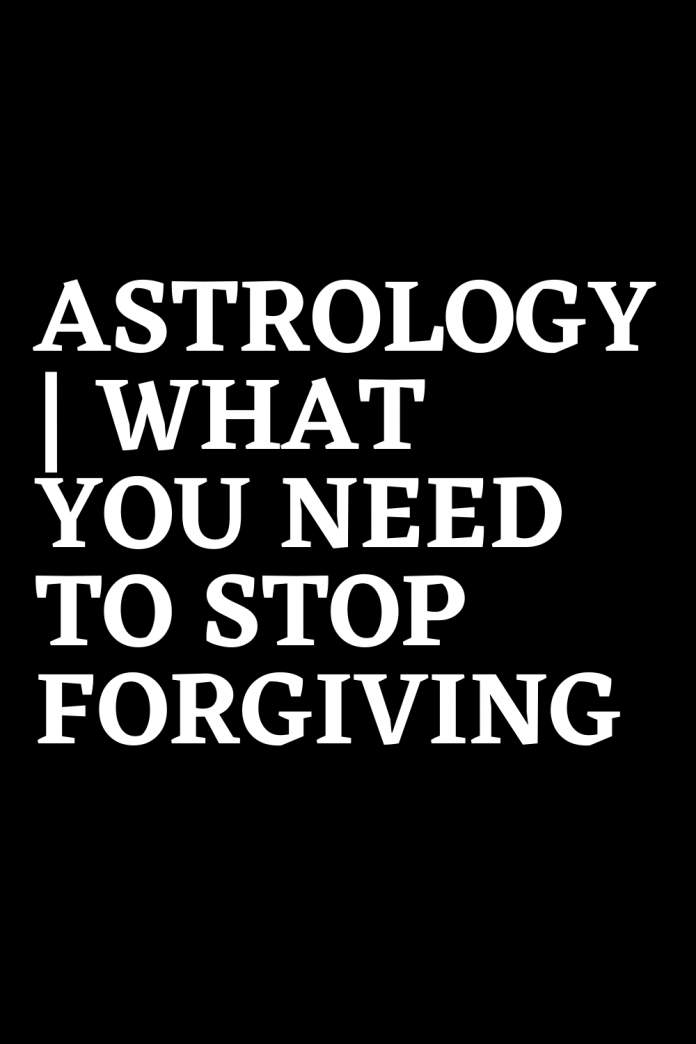 What you need to stop forgiving others based on your zodiac sign.

When it comes to relationships, there are always people with whom relationships are so critical that they can be considered on the razor’s edge. These are precarious balances that struggle to find a different form and that often go on overtime more due to our effort to keep them as such than for anything else. The truth is, sometimes there are relationships and situations that you should learn to let go of, especially when all you have in return is suffering, anxiety, and stress. On the other hand, it would be enough to learn to stop accepting every attitude, choosing not to forgive what hurts the most.

Of course, this is easier said than done, especially since each of us finds ourselves more often than we think to pass on completely wrong ways of doing things that should instead be pointed out. And since this problem of relating may also be influenced by the stars, now after seeing what is the ’emotion that every sign is hard to show and because the signs of the zodiac always think the worst, we will discover what each of us should stop forgiving to others to be able to establish better relationships and able to bring serenity.

Horoscope: Here’s what you need to stop forgiving others in order to live better

Aries – The lack of desire
If there is one thing that freaks you out it is the low energy that others put into the relationship they have with you. Whether it’s acquaintances, friends, or otherwise, you just can’t stand those who tend to maintain a listless or indifferent attitude and when it happens you tend to feel bad or get nervous. Continuing to accept these ways, therefore, will only lead you to increase your bad mood, leading you to appear cold and distant and almost in the wrong. All the better to express your disappointment and not accept any excuses right away. Because everyone can have a bad moment, but this does not justify certain shortcomings towards you.

Taurus – The Hostile Attitude
The fact that you are always a calm and kind person does not mean that others can behave as they see fit towards you, especially if it makes you feel bad about it. Those who behave coldly towards you or, even worse, treat you badly, should be set aside to surround themselves with better, more open, and positive people. As you are a person who always tries to put others at ease, you deserve the same treatment. And if others don’t understand it, it’s not your problem. You will see that by putting the dots on the i’s, many relationships will end up improving. As much as the others, there is always the rule that certain people are better off losing them than finding them.

Gemini – The rude ways
Let’s face it, you are a person far more sensitive than you would like to believe and this means that many times you end up feeling bad for the rude words of those who should be friends. The truth is that your kind ways and the fact that you always appear sunny, lead others to think that you are immune to every way of doing. So when someone is stressed about something they don’t have the slightest problem hitting you. For your part, you always tend to cash out and that doesn’t help you. From now on, therefore, the first thing to do is to point out that you don’t like being treated in a certain way and that you deserve more kindness. Those who love you will understand and apologize. As for the others … their problems, right?

Cancer – The lack of affection
You are a person who is in great need of affection and the thing is so evident that it is difficult to believe that those around you do not know it. Often, though, you end up surrounding yourself with people who act as if they almost take you for granted and therefore don’t bother to remember how much they care about you. Since it makes you feel worse than you would like, the only wise thing to do is to make your problem explicit so you can have the affection you deserve and want. By always acting like this, you will end up getting what you need without having to feel guilty about it.

Leo – Indolence
As a super active person and always ready to give the best of you in any situation, you often end up being surrounded by people who end up taking advantage of your energy to let you do as many things as possible. Since this thing tends to tire you out and make you feel used in some way, you should learn to set limits and curb attitudes of this type already in the bud. In this way, you will be able to find people who like you are willing to do and with whom you can share positive and constructive experiences.

Virgo – Convenience
One of the things you forgive a little too often is the way some people tend to treat you more out of convenience than out of affection. It is a way of doing that makes you suffer but that you always try not to see to better live any type of relationship. Not wanting to see things, however, does not make them disappear, and therefore to improve the quality of your life, you should begin to distance those who behave in this way and approach only those who seem to want nothing from you. Sure, maybe it will hurt you at first, but in the end, it will benefit you more than you think.

Libra – Continuous excuses
The truth is that you have a kind soul that leads you most of the time to justify the shortcomings of others. This means that many times you end up accepting excuses that you don’t even believe anymore. This way of doing things, however, prompts you to push others to repeat their mistakes, knowing that they will still be forgiven. On the other hand, suffering wrongs and shortcomings is something that makes you feel bad and with which you cannot live well despite your many efforts. Stopping accepting an apology with a smile is therefore the first move to make to push those around you to change their attitude and become more responsible for what they do or say. It will be a bit strange at first but over time it will bring you results that push you to continue.

Scorpio – The lack of sensitivity
It is true when you are wrong you tend to get angry and sometimes even pout for a while. Sooner or later, however, you always end up forgiving those who for too much superficiality end up hurting you. Although from a certain point of view, this way of doing you is understandable, on the other hand, it is completely to be avoided. The risk is that of not fully understanding how much certain things have weight. Just as you usually do not accept a lack of sincerity or fidelity, you should therefore become more rigid even towards those who do not show sensitivity towards you. After all, no one has the right to hurt you and you are undoubtedly the first person to take action to preserve your peace of mind.

Sagittarius – The unhappy jokes
It’s true, you are the first to always make jokes and live on the wave of humor. Many people, however, think they are making irony by hitting uncovered points and hurting others. A situation that you know well since in life it has happened to you several times to suffer for other people’s phrases. To turn things around, the only choice you have is to stop forgiving those who make jokes you don’t like. Pointing it out right away will undoubtedly help both others and yourself, making interpersonal relationships even better.

Capricorn – The lack of attention
In life, you are so used to having to bang a left and right to get what you want that you hardly notice the lack of attention of those around you. This leads others to believe that after all you don’t have who knows what need and this leads them not to give you the time you would need. Stopping forgiving this attitude is the first move to make. In this way others will find themselves forced to understand that something is wrong and, questioning themselves, they may even understand it, choosing to give you the space and attention you deserve.

Aquarius – The lack of understanding
In life, you like to worry about what you can control and this leads you to overlook so many attitudes that you bear less than you would like to believe. One of them is the lack of understanding people often have towards you. From not understanding your needs to not respecting some of your requests, there are attitudes that you forgive a little too often. Sure, this saves you from arguing and creating bad moods but will eventually lead to cracks in the relationship anyway. For this reason, starting to point out when something is bothering you could make a difference. And even if it were to push someone to distance themselves, there would certainly be the positive aspect of being able to surround yourself with different people and more similar to you.

Pisces – Negativity
It is true, as an empathic person as you are you cannot help but help others and always be available when they need you to receive a positive word. It must be said, however, that sometimes some go too far, trying to pour anger, stress, and negative emotions on you. This, in the long run, ends up taking away your energy and bringing shadows into your world which is naturally rich in light. For this reason, you should stop accepting people who always and only behave like this because you like everyone deserves your slice of understanding and positivity. To people who only know how to share bad moments with you, it is fair to say enough is enough. Your life is now and it deserves better.