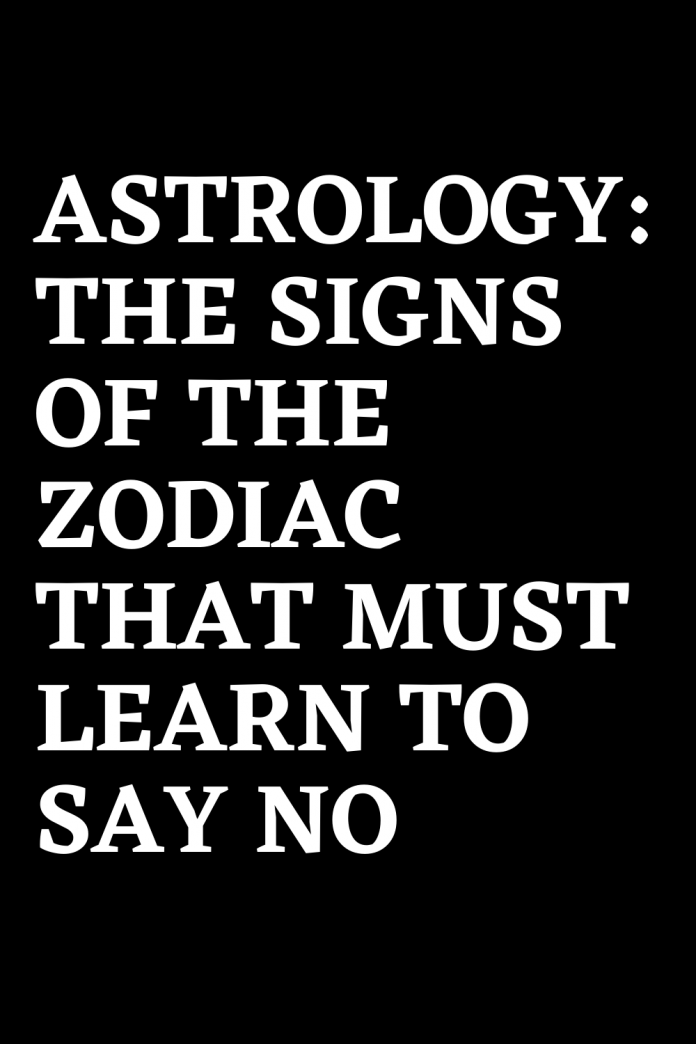 Find out which are the zodiac signs that have to learn to say no and which ones are already very good at it.

Maintaining social relationships is by no means a simple thing and for many, it is even a constant source of stress. We find ourselves being observed, sometimes judged and most of the time we never have the certainty of how to move so as not to hurt the feelings of others. If we add to this that there are many types of relationships, it is easy to understand how relating to others is often such a concern as to remove sleep, especially when we tend to rely too much on those around us and on the opinion that others can have us. For example, who hasn’t happened to say one too many yes at least once just to please those in front of you? If sometimes accepting a proposal can be positive or right for business matters or related to a simple kindness between friends or acquaintances, in fact, many other times there is the risk of creating additional sources of stress, such as to make life much heavier than it could be. But why do they say yes? Often the real problem is not knowing how to say no and this can depend on how we have been raised, by excessive shyness, by a lack of self-esteem, and also by the influence that the stars have on us. Today, therefore, after seeing which are the signs of the zodiac that will soon learn to have more self-confidence and which are the ones who have problems with everything, we will find out which are the ones who should learn to say no. Since this is an aspect related to the way of being, the advice is to also check the profile of your ascendant, to have a more precise idea of ​​the situation.

Aries – Those who don’t need it
Those born under the sign of Aries are generally self-confident people with a good dose of healthy selfishness, essential to understanding when something goes beyond what they are willing to do. A situation that often happens to them and that they do not hesitate to explain, limiting themselves to giving what they feel and then focusing exclusively on themselves and their well-being. Saying no is, therefore, something they have always known how to do and that does not affect them at all, making them what they are, people able to assert themselves, to put their feet up, and to assert themselves in the world and all without ever being afraid of bumping into or hurt others. Indeed, sometimes wanting a little more empathy on their part could help them to show themselves more human.

Taurus – Those Who Seem To Know The Righteous No
Taurus natives are people who love to be available when they can, especially if it means meeting the people they love. For them, therefore, saying yes is almost a constant which they fail only when doing so implies having to deprive themselves of something they care about. At the same time, if they believe that a few too many yeses can create an excessive source of stress in them, they know how to stop in time and retrace their steps in order not to compromise that underlying serenity that is essential for them to live better. It can therefore be said that their management skills lead them to say as many as possible but without ever exaggerating and all because at the base they have a good knowledge of themselves and their limits.

Gemini – Those Who Can Say Enough
Those born under the sign of Gemini are not people who send it to say and when it comes to expressing a no, they always try to be honest and not care too much about the reaction of those in front of them. This, at times, can lead them to some point of confrontation with friends and relatives who may come to feel annoyed by their ways. It must be said that the natives of the sign are often not very diplomatic, limiting themselves to saying what they think without thinking about the consequences. Good at saying the right no, then, but perhaps a little lacking in the correct ways, those that would help them to make themselves understood more easily and to get more support from others.

Cancer – Those Who Say No To Many
Although it would not seem like it, the natives of Cancer are not people who are incapable of saying no. Often they do it in an unclear way, without being precise or mitigating with a maybe the no that comes suddenly. The point is, however, that even if in a somewhat convoluted way, when there is something they do not want to do, the natives of the sign always know how to get the message across and all because they do not have a great desire to get involved in things that they do not want to do. they consider suitable for them. A way of doing things that often receives dissensions, especially when they create confusion for the people around them, which could be avoided with a clear and well explained no when the time comes.

Leo – Those who know how to say no
Those born under the sign of Leo are people who are not afraid to say no. They do it personally when they have to manage business relationships and even when they have to decide something for themselves. Within the zodiac, they are among the signs that know how to do it best and that certainly does not need to practice in this sense. On the contrary, now and then they may try to extend their, yes, to be more approachable and above all more available with those who find themselves asking them for help. In the long run, such a change could be good for their quality of life.

Virgo – Those Who Say Too Many No
Virgo natives are so good at saying no that perhaps they should learn to do the opposite. For fear of making mistakes, of feeling trapped in bonds they don’t want to follow and for a whole host of other reasons (some of which are known only to them) that often don’t even bother to explain, they end up saying no even when they might. doing the opposite and sometimes they are so aware that they end up changing their minds, often confusing those around them. A modus operandi that they should change and that would certainly help them to get in tune with the people around them.

Libra – Those who might learn to say a few more
Those born under the sign of Libra know how to say their no but when it comes to the people they care about, they can go beyond their limits, saying a few yeses too much but then regret it when they realize they have set in motion a situation that they struggle to manage. This way of doing things creates a certain nervousness in them that they could avoid simply saying yes only when they are sure they can keep the answer given. If not, the ideal would be to include some perhaps in their answers. A perfect way to get in the way without having to worry about letting others down or pushing yourself beyond your means.

Scorpio – Those Who Should Learn To Say No
The natives of Scorpio are people who know each other quite well. Yet, although aware of their limits, if at work they know how to manage themselves wonderfully when it comes to their affections, they always end up giving in to a few too many yeses, mainly due to the desire not to dissatisfy them. Knowing how to organize and have the motivation on their side, they always manage to keep their word but in doing so, at times, they can get really tired. For this reason, learning to say a few more no, so as not to overdo it, would be a good way for them to avoid unnecessary stress that in the long run can become difficult to manage.

Sagittarius – Those Who Can Say No
Although they often complain to the contrary, those born under the sign of Sagittarius are pretty good at saying their no. They just tend to do it in a way that they don’t feel guilty or point out the rejection of any requests. Of course, when they can, they too try to make their contribution, making an effort to help friends and relatives as they can. First of all, however, they know how to put themselves at the center of their world, thus avoiding having to do things for others and wasting precious time looking after their interests. All this leads them to be people able to say no which is enough to lead a peaceful life without particular problems.

Capricorn – Those who should learn
The natives of Capricorn have the bad habit of always saying yes to any request made to them only to become nervous when they realize that they can not respect the commitments made. Learning to say a few no would help them find the right time to dedicate to those for whom they commit themselves to achieve the desired results and to be able to act from the heart and not as if they were carrying out a task to be concluded as soon as possible. It is a question of changing the way of seeing things and approaching them and for them, this represents a great obstacle which, however, if overcome, would certainly make them live better, both with others and with themselves.

Aquarius – Those who don’t need to learn
Aquarius are masters of saying no to anyone who asks them for help. They do it without problems and without even advancing explanations and all because their main interest is to satisfy themselves first of all. If now and then they decide to help someone, it is, therefore, more than sure that they do it because they intend to contribute to their well-being and that once they have made the commitment (which will never be burdensome), they will surely keep it, even respecting the times. For this reason, they are among those who do not need to learn to say no but who, on the contrary, could practice saying a few more yeses.

Pisces – Those Who Need to Learn
The natives of Pisces, in an imaginary ranking, are those who of all need most to learn to say no. Their placing others even before themselves leads them to always say yes and even offer themselves even when no request is made. Empathic as they are, they always try to see the people around them happy. This kindness of mind, however, translates into a lot of energy conveyed outside and rarely turned towards themselves. Although their way of leading them to be loved by everyone, now and then they should learn to say a few no to focus on themselves and their happiness.