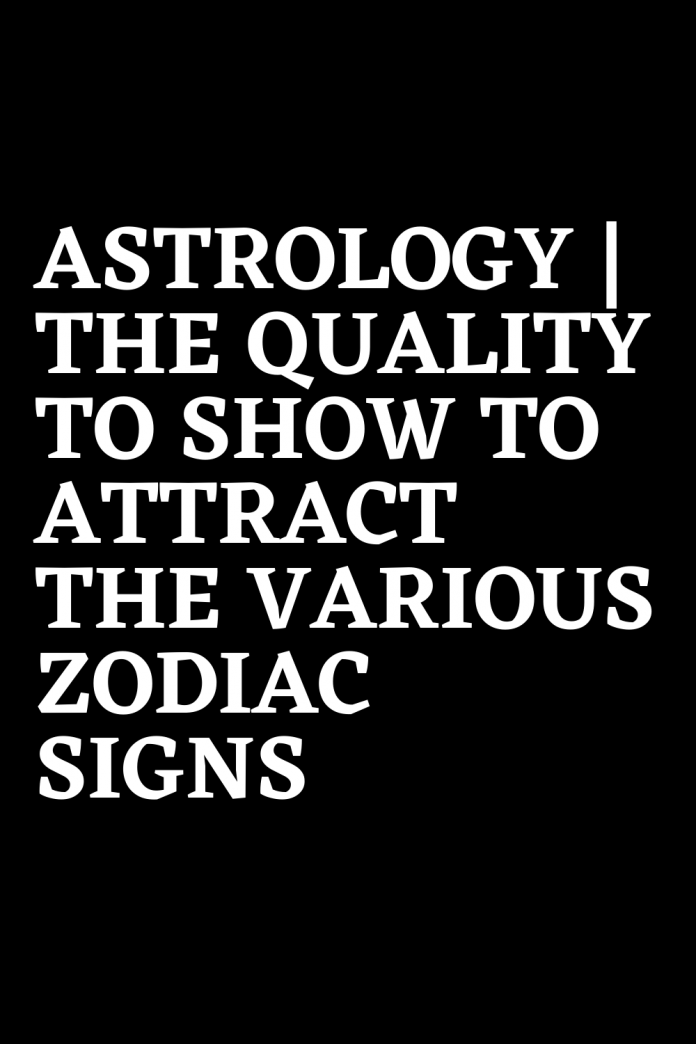 Find out what quality you need to bring out to impress the various signs of the zodiac.

Each of us has several preferences when it comes to people. Some get along well with the sociable ones, those who are attracted to the mysterious ones, and those who love the complicated ones. Although each person is a set of particularities that make them useful and which are often difficult to even describe, it is undeniable that there are aspects that are more noticeable than others and that often lead to the birth of important friendships, profitable working relationships, and even great stories. love.

Each of us has more peculiarities. Sometimes, however, only one is enough to express to the maximum to attract others and conquer them. Which only works if you are genuine and don’t cheat on your characteristics. Having said that, given that even the way of being of each of us is influenced, at least in part, by the stars, today after having seen where we are wrong in love according to the stars and what is the thing that each sign of the zodiac cares most about, we will find out what quality to bring out to impress the various signs of the zodiac.
Since this is an aspect linked to the way of being, often even in-depth, the advice is to also check the profile of the ascendant of the various signs to have a clearer picture of the situation.

Aries – The will to live
Those born under the sign of Aries are attracted to people they think are similar to them. For this reason, to conquer them, it is enough to always be active, alive, and with a great desire to do. This is an aspect that usually leads them to judge positively those around them and to which they feel attracted at the same time. Be careful, however, because they can understand if you are deceiving them. Especially because if they take it for granted that there is a desire on the other side, they will not hesitate to treat accordingly. And in this case, if you pretend to be what you are not, you risk getting more tired than expected.

Taurus – Kindness
The natives of Taurus especially appreciate kind people. Those who advance in life without ever forgetting others and always looking for a way to put everyone at ease. When they see kindness in someone’s gestures they are both happy and attracted to it, probably because they take it for granted that they can be treated the same way. However, this is a characteristic to be measured because if too much it will be seen by them as a weakness, making them immediately change their thinking and attitude. It is, therefore, an aspect to which it is good to always pay close attention, keeping to the standards.

Gemini – Strength of character
Those born under the sign of Gemini are often confused and easily enter into crisis. So when they find themselves in front of people who demonstrate character they are particularly attracted to them. It is a characteristic that gives them a particular sense of tranquility and that makes them feel good. We are talking about the strength of character that is expressed with kindness and concern for others and not that flaunted by those who love to expose themselves in life. In this case, they would not be at ease at all and would end up despising the person in front of them.

Cancer – Sweetness
The natives of Cancer love people who know how to show the sweetness and who have a vision of life based on this aspect. Romantic by nature, they love to be surprised by the gestures of others and understand that there are people in the world who can say sweet things or make romantic and kind gestures. For this reason, however, it is important to always be honest with them and never show yourself in an ambivalent way. If they feel somehow made fun of or treated badly for no reason, they end up blaming themselves for death.

Leo – Sincerity
Those born under the sign of Leo are often difficult people and who do not always appreciate others uniquely. If on the one hand, they like charismatic people, on the other they feel threatened by them, eventually distancing themselves from them. Wanting to find a quality that he always likes (or almost always), this is sincerity. However, this holds until it is used to tell them something they don’t like. In any case, given the obvious difficulties in making sure they like you, sincerity remains the best weapon, and can never lose sight of who you are.

Virgo – Seriousness
Virgo natives are notoriously accurate people. This leads them to appreciate who proves to be the same. Likewise, they have special esteem for those they think are serious. This quality is seen by them as something important that characterizes people who can give and do a lot in life. To conquer them, therefore, it is important to be serious both in the ways of doing and in the goals that are pursued in life. Goals that will be highly praised and where possible even supported.

Libra – Elegance in manners
Those born under the sign of Libra are extremely elegant people and therefore love those who manage to express the same way of being. For their beauty and elegance, they practically go hand in hand, and when they find one they manage to capture the other as well. By elegance, of course, we do not only mean the way of dressing but above of doing and speaking. It is something that comes from within and that they can perceive uniquely and inexplicably. When they detect this quality in someone, however, they tend to take a liking to them.

Scorpio – Loyalty
The natives of Scorpio love people who are genuine and they know they can trust. They generally have very strict standards of evaluation and which they trust blindly. For them, a person of worth must be loyal and that is a particular one they never compromise on. To win them over, therefore, it is important to show them that you are honest, sincere, and with strong values. Be careful though, never lie to them because they know how to be extremely vindictive and there is nothing worse than betraying and hurting them. Because their contempt will be the last thing to worry about.

Sagittarius – Humor
Those born under the sign of Sagittarius love people who are funny and who can keep them entertained. Always on the run from a life they perceive as too heavy, they seek constant sources of distraction in others. For this reason, they need to surround themselves with cheerful people who are always ready to make them smile. Offering them a good dose of humor is therefore the best way to win them over and to immediately enter their sympathies. The humor they need, however, must always be associated with a certain amount of empathy. Because people born under the sign of Sagittarius are not always in the right mood and with them, one wrong move is enough to make them enemies immediately.

Capricorn – Lightness
Capricorn natives are people who tend to always take things to the extreme and therefore need lightness. This means that when they find themselves in front of someone who exercises a certain sympathy and simplicity in their ways, they tend to always look favorably on him. For them, the ability to have fun and take life spontaneously is an added value for which they come to feel admiration. To conquer them, therefore, the trick is to be able to involve them in something fun, make them feel light, and help them have fun, and not think about the many tasks that await them. Be careful not to overdo it, however, because if they were in trouble for a reason related to leisure, they would put aside any positive thoughts by withdrawing into themselves and immediately distancing themselves.

Aquarius – Sympathy
Those born under the sign of Aquarius love to surround themselves with nice people, with good dialectics, and who know how to entertain in a simple but interesting way. It’s not that important for them to be around people and when they do they feel the need to feel 100% involved. The real challenge is to entertain them to the point of not making them regret the tranquility of home. This is very difficult when it comes to the natives of the sign. By achieving this goal, however, you will have the certainty of having conquered them 100%.

Pisces – Humanity
The natives of Pisces are people who are notoriously empathetic and full of good feelings. To get along with others and to be interested in someone they don’t know, they have to sense something that resonates within them. This something is usually the humanity that few people still manage to express but which they feel a great need for. Being human and understanding with others will give them the desire to get to know who they are in front of. Be careful not to pretend, however, because the disappointment they would feel would be such as to lead them to close all contact and all without the slightest hope that they will change their mind.