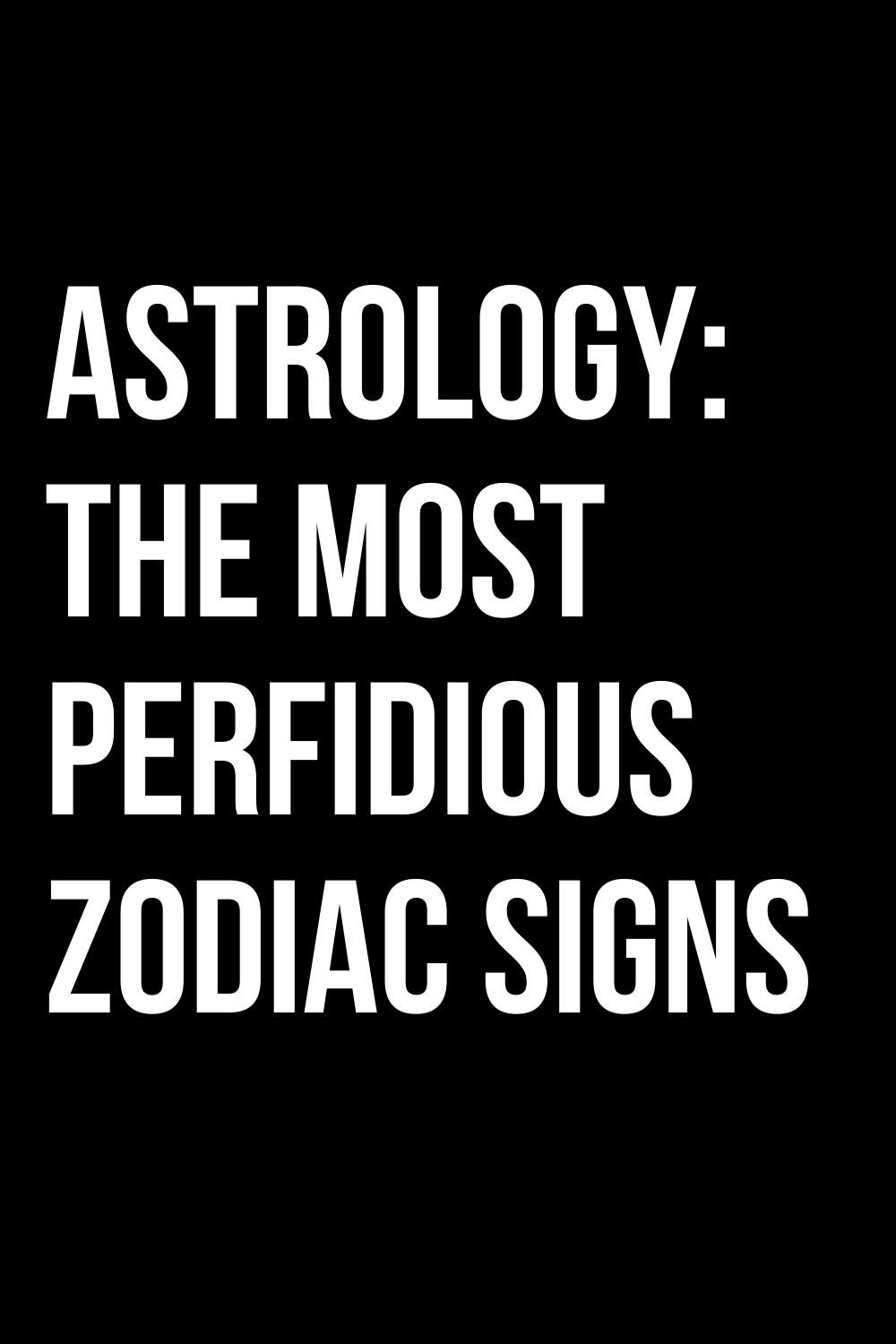 ASTROLOGY: THE MOST PERFIDIOUS ZODIAC SIGNS

Find out which are the most wicked zodiac signs of the zodiac and which are not at all.

The human being knows how to be bad in different ways as well as, of course, he can also be good, kind, etc … The truth is that each of us has various characteristics that tend to emerge according to the situations and that from person to person they can be different. When we talk about perfidy, for example, we don’t mean that a sign is totally bad but that it succeeds better than the others.

Having said that, then, and after having seen which are the most mysterious zodiac signs of all and which signs of the zodiac they betray without repenting, today we will discover which are the most perfidious zodiac signs and which are hardly any. Since this is a way of being that has a lot to do with the way of feeling, the advice is to check the profile of the ascendant to have a clearer picture of the situation.

Horoscope: The most treacherous zodiac signs and those that are not at all

Aries – Definitely perfidious
Those born under the sign of Aries, of all signs, are the ones who excel when it comes to perfidy. When they feel hindered or threatened they tend to pull out their weapons to win the victory in what often becomes their war. Lovers of challenges, they tend to often feel in competition with others, and when this happens if they fear that on the other side there are more chances of victory, they begin to stiffen, experiencing unpleasant feelings that in the long run can lead them to even extreme reactions.

Taurus – Only perfidious when needed
The natives of Taurus love to live in peace and harmony and when they can they are even inclined to dampen possible discussions or tensions with third parties. If they feel personally touched, however, they suddenly change, initially becoming wary until they reach even high levels of perfidy. It can be said of them that they attack essentially to defend themselves or to protect what they think they are. When this happens, they act without thinking too much and, above all, without regretting the consequences. For them in extreme cases, every means makes sense to exist. Fortunately, these episodes are very rare and limited to really extreme situations.

Gemini – Perfidious more than anything else in words
Those born under the sign of Gemini are sociable and kind people and they love to feel good about others so much that they do not have the slightest intention of behaving badly. Every so often, however, especially if they go through one of their moments not, they can become treacherous especially with words. Pungent as few, when they realize they can hurt so easily they don’t hesitate to do it. However, it is not something that happens often but only when they argue with someone or feel so judged that they have to express their opinion. Which they will do by trying to silence voices they don’t want to hear.

Cancer – Modestly treacherous
The natives of Cancer always love to show the sweetest and kindest part of themselves, putting aside the most treacherous that they know how to keep well hidden to bring it out only on special occasions. When they feel attacked or not appreciated as they would like, they become more irascible and begin to feel such resentment that they give their worst. Usually, there being treacherous translates into teasing that they do to people who at that moment see a bad eye and if they are exasperated in words that they know how to use very well for the occasion, making them hard as boulders. In short, when they are sweet, they have a second face that it is always better not to explore.

Leo – Quite Treacherous
Those born under the sign of Leo always present themselves as cheerful, positive, and focused on finding different ways to improve their lives. At first glance, they would not seem like people capable of perfidious gestures but it is just a facade behind which there is such a need to always have what they want that they can field unimaginable actions. Most of the time their perfidy is expressed in words heavy to digest. At other times, they may go so far as to do some “tripping” at work if they think someone is trying to rip them off or take their place. Being very good at looking after themselves they always know how to defend themselves and counterattack and when they decide to do so it easily happens that they put their ability to be treacherous into play.

Virgo – Perfidious when needed
Virgo natives are extremely rational people and this leads them to think about everything around them and, of course, also about the people around them. When they feel they have been wronged they become so tense and nervous that they carry out all possible perfidy and this is because they hate the idea of ​​someone making fun of them or trying in some way to cheat them. The attitude suddenly changes if they manage to clear up or understand that no one is angry with them. It can therefore be said that they know how to be treacherous but that this only happens when it is needed. In other cases, they much prefer to live peacefully and without too much tension, since their life is already often neurotic because of the many thoughts they have.

Libra – Not so treacherous
Those born under the sign of Libra have a calm temperament and this leads them to want to have as peaceful relationships as possible with others. While they usually never get angry, the rare times it happens, while trying to hide it, they always end up showing some aspect of their resentment. Ironically, what emerges most are resentment and perfidy. Because although they are always calm and moderate, when they take it for something, the natives of the sign tend to want to embarrass people who feel hostile, becoming so in turn. A situation that often and willingly ends up making those who find themselves undergoing their way of being uncomfortable.

Scorpio – Treacherous
The natives of Scorpio are very good at treachery. If on the one hand, they are always attentive to the needs of the people they care about, on the other hand, if by chance they come to feel betrayed in some way, they can give space to so much of that perfidy that it leaves everyone speechless. Fortunately, this is not something they do often because they are aware of the extent of their actions. When they can’t take it anymore, however, they tend to express anger with hostile attitudes, taking revenge in the worst ways they know, to the point of making anyone regret it even if they just accidentally stepped on their foot.

Sagittarius – Quite Treacherous
Those born under the sign of Sagittarius know how to bring into play the perfidy which they tend to use more in words than in deeds. When they decide to act, they do so by trying to turn situations and maneuver them to the point that they have all the reasons on their side. This happens because they always love to come out clean from every situation and when they think that someone is trying to put them in bad light they take it to death, triggering perfidy. For them, it is such an automatic way of doing things that change is practically impossible, above all because most of the time they don’t even realize it.

Capricorn – Moderately perfidious
The natives of Capricorn have an ambivalent relationship with perfidy. If no one gets in their way, they prefer to live in peace and not have problems of any kind. When they feel opposed or in danger, however, their way of acting changes completely and if it serves to give them a few more points they also resort without problems to a treacherous side that, although well hidden, they hide within themselves. Of them, therefore, it can be said that they are mean on average because despite having the ability they tend never to act unless “invited” by the attitudes of others that they consider wrong.

Aquarius – Definitely perfidious but only if they need it
It cannot be said that those born under the sign of Aquarius are not perfidious. The point is that they rarely find themselves in such circumstances that they have to put into practice this way of being. Usually reserved and taciturn, they hardly reach social interactions that leave room for their way of being. If necessary, however, they know how to put perfidy into practice and they do it without the slightest sense of guilt, supported by the fact that if they act it is only because someone has behaved badly towards them or tried to cheat them. In short, it is better not to provoke them because however rare their perfidy knows how to be remembered over time.

Pisces – Not at all perfidious
The natives of Pisces are those who within the zodiac can be considered the least perfidious of all. For them, responding to an action that they consider wrong in a bad way is both useless and harmful to their image. For this reason, even when they are angry with someone they prefer to avoid being guided by anger, by permanently moving away. Of course, if someone gets to hurt them they can also resort to extreme actions but it would be more a kind of self-defense than anything else and this leads them to not make use of perfidy anyway.