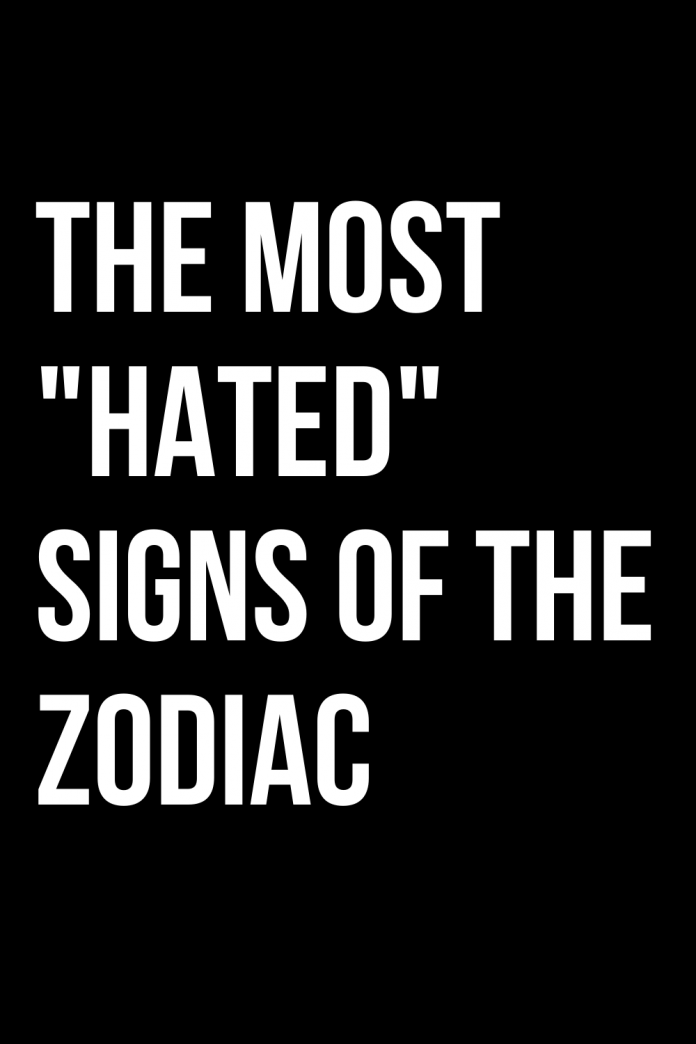 Find out which are the most hated zodiac signs and for what reason.

When it comes to the zodiac, many people believe they can recognize someone’s zodiac sign simply by observing it for a while. This happens because every person is in some way characterized by the influence of the stars and this leads to ways of doing and acting that often, although not always, can be typical of a zodiac sign.
The truth is that understanding a person’s zodiac sign with a single glance depends on many factors which include their influence and the influence it has on their way of being. In any case, each of us has a more or less marked impression on the various signs, either for someone you know and is of a zodiac sign or for knowledge of the basic characteristics. All this inevitably leads to preferences and, of course, dislikes. Well, today after having seen which are the zodiac signs that never learn from their mistakes and which are the most generous in love, we will discover which are the signs that, rightly or wrongly, are most hated by others.

Horoscope: the most hated and the least hated signs of the zodiac

Aries – Almost not hated at all
Those born under the sign of Aries are generally quite sympathetic to the other signs of the zodiac and are very unlikely to be hated. The situation can change if it comes to confrontation because their competitiveness sometimes becomes so extreme as to create conflicts that can sometimes prove unsolvable. However, their cheerfulness and desire to do make them appear as sunny people and able to be among the people. For this reason, they tend to have more likes than dislikes, so much so that it is possible to say that they are among the most tolerated signs of the zodiac.

Taurus – Little Hated
Taurus natives have such polite manners that people tend to take them almost always to heart. Their kindness, combined with the way of doing things and the serenity they manage to convey, makes them people able to please from the first meeting. A particular, not just that makes them people who are hated very rarely and only in extreme cases. Even when this happens it is likely that with the right knowledge, they will be able to change their mind about them, resulting in a more pleasant relationship than anything else.

Gemini – Hated by half of the zodiac
Those born under the sign of Gemini are so dual that they can be said to be able to divide the zodiac in two. Thus, if on the one hand, some feel an innate sympathy for them, on the other there are those who, not bearing their way of relating, can feel dislike and sometimes even come to detest them. Fortunately, they tend to ignore these details, and thanks to the ability they have to communicate with everyone they even manage to change the minds of those who until recently hated them. Amiable as few, they always know how to take people, especially if it is someone they have just met and who they manage to ensnare to the sound of chatter.

Cancer – Lovingly Hated
The natives of Cancer are among the toughest in the zodiac. With a sweet appearance, they know how to be so touchy that even the most peaceful people in the world lose their patience and when this happens they may find themselves against them and end up detesting them. One can hardly ever speak of hatred but adverse feelings that if on the one hand are somewhat dampened by their sweet moments, on the other hand, it makes others remain on the alert and always ready for their outburst. This, among other things, also happens quite often, especially if they find themselves having a wrong moon.

Leo – More or less hated
Those born under the sign of Leo show themselves as sunny people and always ready for dialogue. On the other hand, however, they have such a need to appear and prove themselves superior to others as to create tensions that often result in limitless antipathy on the part of those who cannot tolerate their ways. It must be said that they tend not to worry much about this aspect because between being indifferent and being hated they undoubtedly prefer the second option.

Virgo – Quite Hated
Virgo natives are people who know how to make themselves hated. Always ready to judge others and to point out every smallest flaw, they always end up indisposing the people with whom they have to deal, especially if at the base there is a confidence that makes them feel entitled to say what they think without too many filters. For this reason, they are among the most hated zodiac signs of the zodiac. A detail that they don’t care too much about, certain that if someone is angry with them it is only because they felt stung and therefore in the wrong.

Libra – Almost not hated at all
Those born under the sign of Libra are essentially lovable people, always ready to listen to others and give advice. There being always focused on what is beautiful also makes them pleasant people and with whom it is always a pleasure to hang out. For this reason, those who know them are inclined to feel sympathy towards them and rarely dislike them. It can therefore be said that they are among the least hated signs of the zodiac as well as, in turn, they are a little prone to hatred.

Scorpio – Often hated by those who do not know them
Talking about real hatred versus the natives of Scorpio is perhaps a bit exaggerated. It is also true, however, that those who do not know them well may initially be surprised by their often elusive ways and by the reputation of vengeful people who, it must be said, precedes them. If you get to a fight, therefore, they can arouse someone’s antipathy, which instead tends not to occur when you know them thoroughly and all because after a first glance what emerges about them is the goodness of mind and the loyalty that they demonstrate in every relationship, even if it is among the most superficial. It can be said, therefore, that when someone hates them it is because they have not been able to understand them, stopping at mere appearance.

Sagittarius – Hated
Those born under the sign of Sagittarius are often hated because of their way of being too direct. When they talk they tend not to have filters and to say everything that goes through their head. This means that over time they find themselves offending, even without realizing it, the people with whom they interact, creating conditions for which a feeling of hatred easily arises at the first misunderstanding. Although they realize this aspect, they struggle to understand why often think that they are victims of the ways of doing others that are wrong. A problem that sometimes comes to afflict them but always without giving them away to understand and therefore change their attitude.

Capricorn – Moderately hated
The natives of Capricorn tend to be detested in certain environments, first of all, the work one. Workaholics like few others, they have delusions of perfection that make any possibility of a relationship extremely difficult and that leads to creating a sort of barrier between them and others. Over time, this can turn into hatred and sometimes hatred. It must be said that on the other hand, they are much loved by those who frequent them in everyday life and have no reason to interact with them from a work point of view. For these reasons it can be said that no matter how hated, thanks to this sort of balancing they are able to reach an average for which they are in a ranking they would be more or less in the middle, obviously with a tendency towards the first places.

Aquarius – Hated
a lot Let’s face it, those born under the sign of Aquarius can only be loved by the few people to whom they allow to be known in-depth and this does not happen every day. Reserved as few and always attentive to their needs, they are not masters in communication nor in managing social relationships. This leads them to be easily detested. If we add to this that they have an innate tendency to ignore the thoughts of others and always do their own thing, the chances of being hated increase exponentially making them the most easily hated sign by all.

Pisces – Not at all hated
Hating the natives of Pisces is difficult. Of course, you can never say never but it would be for a fortuitous case. This is because Pisces is always well disposed towards others, empathic as few and so willing to get to step aside in order to make the people they love happy. All features that are generally appreciated and that even if sometimes lead the most calculating to try to take advantage of their way of being, in general, they are never detested unless someone feels so pampered by their way of doing. to dislike them if for any reason they suddenly find themselves having to give less attention. Fortunately, this happens rarely.