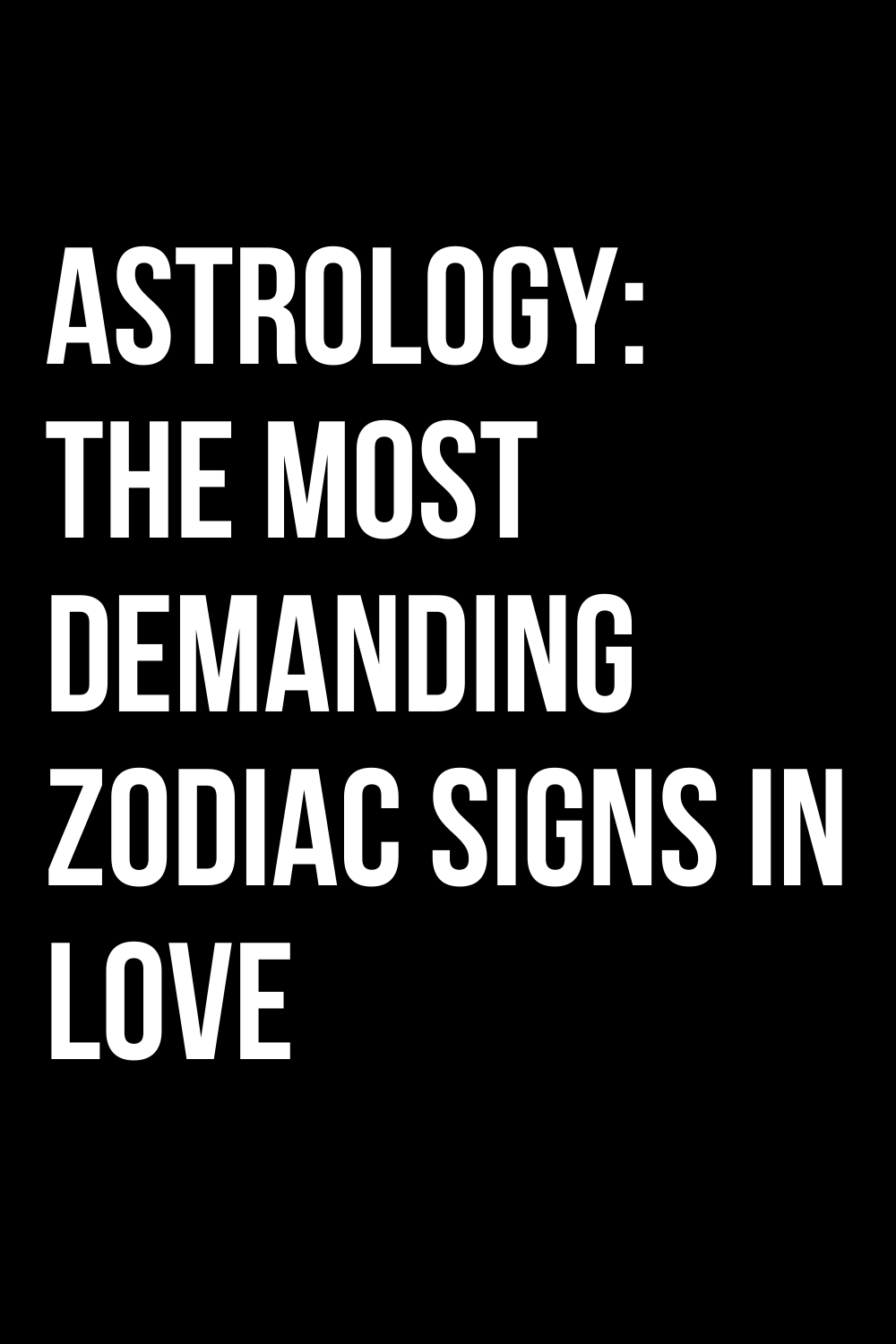 ASTROLOGY: THE MOST DEMANDING ZODIAC SIGNS IN LOVE

Find out which are the most demanding zodiac signs in love and which are not at all.

When it comes to love it is normal to try to imagine what a relationship can be like or how a certain person might behave in a certain relationship. To understand this, often, the only thing you can do is just observe how people change with time. Alternatively, you can ask the stars, based on the ways of being of the various zodiac signs. Ways that, needless to say, can vary from person to person and all based on the ascendant of the stars. Today, therefore, after having seen which are the most envied zodiac signs of all and which are the signs of the zodiac they love too much, we will discover which ones are the most demanding in love and which ones who, on the other hand, are not at all. Since this is a way of being that is often linked to sensations and emotions, the advice is to also check the profile of the ascendant of the sign that you intend to control, to have a more precise idea.

Horoscope and love: The demanding zodiac signs and those who are not at all

Aries – Moderately demanding
Those born under the sign of Aries tend to be free spirits and this leads them not to have extreme demands on any partners. Of course, from a certain point of view they require fidelity and attention without which history could not go on but being often taken by their things, they more than anything else need someone who is always ready to support them and who does not hold back. when there is to be next to him. For the rest, just as they demand certain freedom, they are also willing to give it, aware of the fact that otherwise, they would end up getting tired first.

Taurus – Very demanding
Taurus natives have a very specific idea of ​​what a love relationship should be like. For this reason, they are very demanding and have no problem admitting it. From their partner they first of all demand fidelity and sincerity, conditions without which they cannot even think about carrying on a relationship. Once they have obtained what are the fundamental bases for them, they also add sagacity, beauty, promptness of spirit, and goodness of mind. All requirements are indispensable for them and without which they could decide to end a story. Because when they love they want to think they can do it forever and they certainly can’t see a future with someone who doesn’t reflect their ideals or who is completely out of their line of thought.

Gemini – Demanding in a variable way
Those born under the sign of Gemini appear as people with a variable pattern. When they have a love affair, they’re being demanding changes according to the circumstances. So if at times they may seem so open and liberal that they do not expect anything, other times they become so pretentious as to risk tiring the partner who, not used to certain pressures, finds himself displaced. It must be said that the natives of the sign tend to express their emotions chaotically and when they feel unsafe they can become jealous and obsessive. Conversely, when all goes well, they tend to grant more freedom as well as demand more. However, these ways of doing things change constantly creating a lack of balance in the relationship. But after all, we know that part of their charm also lies in this continuous swing of emotions, right?

Cancer – Very demanding
Cancer natives are very demanding. I am for several things for which I am never willing to compromise. If from an aesthetic point of view they may turn out to be less pretentious than you think, the same thing cannot be said for the character of the partner who must have specific requirements. Beyond fidelity, sympathy, and constant presence, he must always put them at the center of attention, make them feel loved, and show them, love, in all possible ways. Without these requirements, it is difficult for them to be able to carry on a story because as insecure as they are they need to be able to feel peaceful with the person they love.

Leo – Demanding
Those born under the sign of Leo love to be calm and unpretentious. In truth, however, they tend to demand a lot from their partner who at times may come to feel more like a business relationship than a love affair. Beyond beauty and economic position, their concerns focus on the social aspect or on how the partner shows himself to others, on how he interacts, and on how much he will be able to support him. It should not be forgotten that the natives of the sign have an urgent need to feel at the center of attention and when they accompany someone they demand that they know how to be by their side without ever overshadowing them. There is no place in their life for another protagonist. At the same time, they don’t like to show up with someone anonymous because they want to be envied even for the person they are with. In short, among the various signs of the zodiac, they are probably among the most demanding.

Virgo – Demanding Virgo
natives tend not to express themselves too much when it comes to feelings. Their actions, however, speak for them and demonstrate a whole series of needs such as having at your side a reliable person, knowing the facts about her, and can take care of all kinds of chores. Fascinated by independence and the ability to manage themselves, when they are with someone they end up demanding these aspects which, if absent, lead them to re-evaluate even the relationship. Because if there is something that matters to him, more than any other, it is being able to rely on someone, aware that he knows how to be guided in certain ways but also knows how to anticipate them, thus giving life to a dynamic and constantly evolving relationship.

Libra – Not too demanding
Those born under the sign of Libra have few needs in the sentimental field but those they have are very specific and destined to be fulfilled. For them, the ideal partner must be accommodating, know how to understand them at first glance, and be able to appreciate their way of being and living situations. When this does not happen they suddenly become more demanding, noticing defects that they previously did not give any weight to and even becoming heavy. The only way to get along with the natives of the sign? Be accommodating and know how to read them before they ask for it. This will make it much easier to get along and not clash too much.

Scorpio – Emotionally demanding
The natives of Scorpio, when it comes to theory, are always willing to let go of any shortcomings of the partner, determined as never before to focus only on the positive sides. Unfortunately, many times they let themselves be taken by instinct, and this leads them to want much more than they are willing to admit. It can therefore be said that beyond what they would like, they are very demanding people. For them, a good partner must, first of all, be sincere and among other qualities, there are loyalty, complicity, and the desire to be a compact team. When these elements are lacking, history no longer makes sense of existing. Despite the needs they have, they are more accommodating in their ways of being or doing. Although the dream of someone who can stimulate them emotionally and who boasts a certain culture,

Sagittarius – Extremely
demanding Those born under the sign of Sagittarius are demanding and this despite pretending that on the other side nothing is required of them. Lovers of good company and freedom, pretend to be able to decide everything that concerns them while pretending to be able to control the person they are with. This is a way of doing that in the long run can lead to certain suffering within the relationship, especially when they are the ones who have shortcomings who, despite being hypercritical, do not accept judgments of any kind, even proving to be touchy if they are placed some comments in negative.

Capricorn – Demanding in Their Way
It is difficult to understand what Capricorn natives demand from their partners. What is certain, however, is that they always have some need that, if disregarded, leads them to stiffen and offer themselves in the wrong way to their partner. When they are with someone they pretend to have his attention and to be understood in their needs such as work needs. When this does not happen they feel little understood and end up seeing the relationship in a suffocating way. A peculiarity that distinguishes them to the point of pushing them to think about changing or to take time to reflect on what to do. Satisfying them can therefore be difficult, especially if there is no certain harmony at the base.

Aquarius – Almost not demanding at all
Those born under the sign of Aquarius do not have who knows what demands when they are with someone and this leads them to be among the most accommodating signs of all. In fact, in a relationship, the only thing they want is respect for their spaces and the need to be alone often. For the rest, they tend to be quite serene about the other person’s way of being and this is because they feel so complete even on their own that they do not feel the need for certain characteristics or particular attitudes towards them. Perhaps now and then they may appear unenthusiastic about the other person and it is certain that if something does not suit them they will not have problems communicating it but certainly they will not always be ready to ask or expect something in particular as long as their spaces are understood and respected.

Pisces – Not that demanding
Pisces natives are so sensitive to feelings that they strive to take only what comes. Nevertheless, when a pinch of selfishness stands between them and the many ideals they have, they can show themselves in need of attention and understanding. For them, the partnership represents a sort of haven which therefore must be able to make them feel at ease. When this does not happen they end up feeling a little lonely, appearing sad and pushing against them is next to them to ask themselves some questions. Fortunately, they are also so attentive to the needs of others that this way of doing tends to take a back seat, allowing them to show themselves more for their understanding than for anything else. Among the various signs, they are therefore among the least demanding and certainly closer to dialogue and understanding.