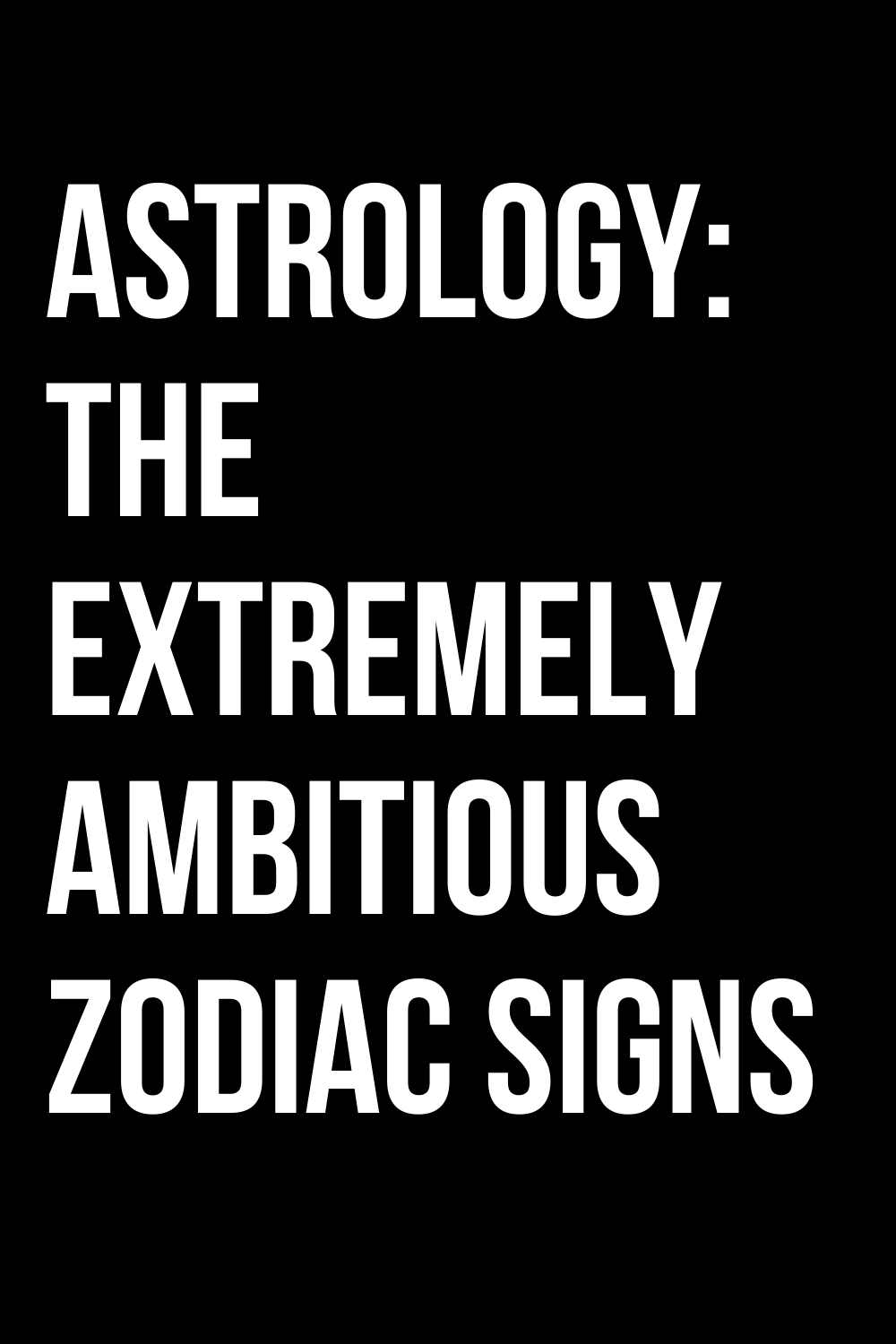 Find out which are the most ambitious zodiac signs of all and which ones are not at all.

Being ambitious is a peculiarity that belongs to different people and is expressed in various ways. Some make the ambition a reason for living, those who pursue it only for what concerns work or personal projects, and those who are ambitious by nature and therefore eager to live the best in every aspect that life can achieve. offer him.
Being ambitious or not is therefore linked to many aspects that are sometimes difficult to decipher but which most of the time also depend on the character of the subjects involved and, needless to say, on the influence that the stars exert on each of us. Today, therefore, after having seen which are the strongest signs of the zodiac and which are the characteristics of the zodiac sign of Virgo, we will discover which are the extremely ambitious signs of the zodiac and which are the ones who, on the other hand, live well even without great intentions for the future.

Horoscope: The most ambitious signs of the zodiac and those that are not at all

Aries – Ambitious but only if there is not too much effort
Those born under the sign of Virgo are people who like to think big and who have big plans in store for their lives. This makes them extremely ambitious and competitive people, always ready to take the field to assert their rights and to fight for the things they care about. Of them, it must be said, however, that they also have another prerogative which is that of laziness. An ingredient that tends to dampen their ambition a lot, leading them to pursue it only if there is not too much effort to make. Absurdly, therefore, although the spirit of competition is not lacking, as well as the desire to always be the first in everything, it can be said that they are ambitious people only for certain things and only if they believe that it is worth it.

Taurus – Ambitious for only a few things
The natives of Taurus are quiet and extremely calm people, with a well-defined vision of the world and their future that tends to remain unchanged even with the change of time. Ambitious when it comes to aspects that can lead to improvements in everyday life, they are also extremely lazy and mainly aimed at enjoying life, avoiding unnecessary struggles that would lead them to get tired. That said, when their ambition is combined with the project of a better life, they are ready to change their attitude, putting aside any need for relaxation to fully commit to any project. Usually, the desire to do that in these cases they do not lack, leads them to put all their energy into what they do, thus leading to excellent results and for those who know them to the limit of a miracle. The truth is that their will to live well is so great that it even pushes them to focus all energy on striving for it if they know that eventually, the reward will be able to give them the much-desired satisfaction. An aspect that others have a hard time understanding but that makes them tenacious and able to get the things they want.

Gemini – Not that ambitious
Those born under the sign of Gemini are not exactly ambitious people and this depends in particular on the fact that their ideas are in constant evolution and tend to change so quickly that they do not have the mathematical time to commit to something to follow any ambitions that, on the paper, are often present but destined to change. It can therefore be said that theirs is a sort of theoretical ambition that leads them to change their mind quickly and transform even the most important projects based on the emotions and ideas of the moment. A modus operandi often generates confusion, especially when they profess more than decided on something that in a short time tends to fall into oblivion. Their dualism, however,

Leo – Extremely ambitious
Those born under the sign of Leo are among the most ambitious signs of the zodiac. For them, living a great life is what matters most and to do so they are always with their minds on the move, ready to make new projects to follow with commitment and extreme care. Having the best of everything and excelling over others are aspects of life that matter more to them than anything else and for this reason, they are always ready to give their all, at the cost of becoming even a little disloyal if they find someone they consider. dangerous in their path. It is therefore always better to beware of the natives of this sign because driven by ambition they are ready to do anything, certain that, however it goes, it will be worth it.

Virgo – Ambitious but not too much
Virgo natives are very ambitious people. However, this particularity tends to diminish over time, especially in the presence of obstacles that one after another can come to overwhelm them, leading them to desire a quiet life in order not to feel constantly fighting for something. Although they are among the most ambitious signs of the zodiac, it can therefore be said that theirs is an ambition that tends to change over time and that can only go on if supported by a lot of luck and the right support. In the absence of these elements, they will find themselves more easily surrendering to less grandiose ideals, even at the cost of feeling frustrated and accepting this unpleasant but less tedious feeling than the one they experience in not quickly reaching the goals they have set for themselves.

Libra – Not very ambitious but in a decisive way
Those born under the sign of Libra do not have huge ambitions in their life. Lovers of beautiful things and the pleasant sensations that life can give them are more focused on pursuing the importance of individual moments rather than difficult goals to achieve. Although theirs is a way of seeing life that is difficult to understand it must be said that the character and the decision they put into the few things for which they choose to dream are such that they almost always get what they want. When this does not happen, however, they always know how to change perspective to still be able to reach a situation that is pleasant for them and in which they can live at their best and with the right amount of satisfaction.

Scorpio – Ambitious by nature
The natives of Scorpio are ambitious by nature and this leads them to always dream big. For them, everything can be achieved in different ways and when they can they try to put the maximum effort into it, to obtain maximum results in the best possible time. Having said that, and even considering that like other signs of the zodiac, they desire to get what they want with as little effort as possible, when they have a project in front of them that they consider important, they become real fighters, ready to do anything to achieve it. . In these cases the tenacity, willpower, and resilience that they know how to put in place become elements capable of making them real winners, ready to do anything to reach the goal that, sooner or later, they always manage to achieve,

Sagittarius – Less ambitious than they show themselves
Those born under the sign of Sagittarius live on ambitions that, at least in theory, are many and also well articulated. They have very specific ideas of their life based on dreams and projects that are sometimes so precise that they even have deadlines. Nonetheless, they too often find themselves having to change paths and perspectives due to different situations at the center of which they end up finding themselves. Last but not least is the real lack of desire to pursue all the efforts necessary to achieve what they want, which represents their biggest obstacle and what they all too often insist on not seeing. Luckily they always have at least one ba plan at hand that helps them accept any downsizing,

Capricorn – Ambitious especially at work
Capricorn natives can be extremely ambitious people especially when it comes to working. In this field they always try to use the maximum of their strength, thus proving also capable of obtaining certain results that are sometimes even difficult for anyone else. Nonetheless, outside the workplace they seem to lose all forms of ambition, taking things as they come and thus avoiding using their energies in something constructive. If on the one hand, this leads them to lose opportunities to improve their existence even from different points of view, on the other it allows them to concentrate better on one of the aspects that are most important to them. For this reason, they turn out to be ambitious people, albeit in their way, and able to get what they want without almost feeling fatigued.

Aquarius – Not very ambitious
Those born under the sign of Aquarius are decidedly unambitious as they are mostly focused on a form of well-being that has little to do with success in business or other areas of life. For them, what matters most is to live in complete serenity, enjoying the freedom and spaces that they love to allow themselves every day and that have nothing to do with achieving certain results or with the approval of others. We can therefore say of them that they are among the least ambitious signs of all but that also thanks to this way of being they are always able to be faithful to themselves, doing only what they love to do and exclusively following their desires. The only real ambition for which they are willing to spend energy.

Pisces – Quite ambitious
The natives of Pisces are well aware of ambition and know-how to move to achieve the goals they have set for themselves. Always straddling a reality made up of dreams and hopes and one more similar to that perceived by the rest of the world, when they have a particular desire, they tend to follow it using effort and energy and this because they are well aware of how sometimes it is essential to fight for achieving their goals. Having said that, they always know where to put their limits and how to move to follow their ambitions without giving up the simpler and more precious aspects of their life. A way of doing that characterizes them, making them different from anyone else and thus allowing them to achieve their ambitions in a perhaps less conventional but no less successful way than others.