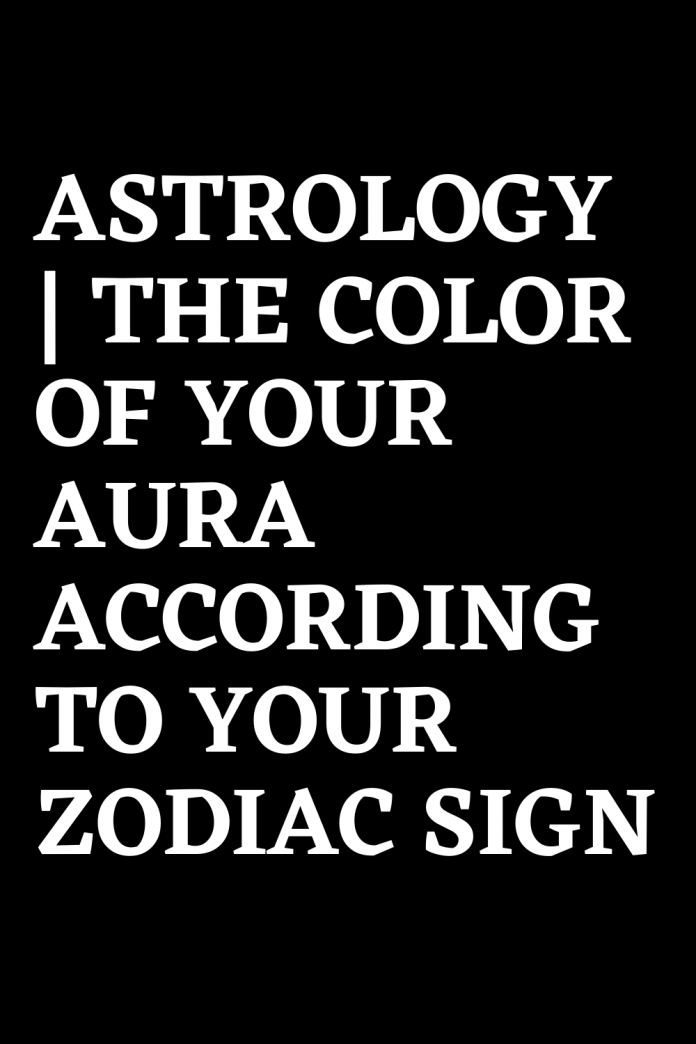 Find out what color your aura is based on your zodiac sign.

Anyone who has already heard of aura knows well how this depends on the energy of a person and that according to its color some characteristics can be defined such as life force, goodness, or temperament. What not everyone knows is also the zodiac signs have their aura which if not comparable to the one mentioned above still makes sense and is linked to the main characteristics of the signs, probably also influencing the main one of the subject.

Today, therefore, after having seen how each zodiac sign transforms after drinking and which are the signs of the zodiac that already need a break, we will find out what is the color of the aura of all the signs of the zodiac. Since we are talking about energies and emotions, it would be interesting to check that off your ascendant as well. The two colors put together could give clearer ideas and motivate choices and preferences (including color in everyday life) of each of us.

Astrology: The color of the aura of each zodiac sign

Aries – Red
Passionate, fiery, always active, and eager to make discoveries, those born under the sign of Aries have a red aura that they express well with their way of acting and interacting with others every single day. At certain moments in life, this color can fade, keeping to gray and this mostly happens when they feel pressured or when they put their dreams aside to focus on what is right to do. Nothing could be more wrong for living people like them who, to feel good and be fully themselves, need to go with the flow and cross the rushing wind of their passions.

Taurus – Dark Green Taurus
natives have a dark green aura that reflects their being naturally relaxed and always at ease. Lovers of relaxation, always release a type of energy that helps others feel at peace with themselves and know how to bring balance with their mere presence.
Theirs is an almost constant aura that tends to dark brown when too many thoughts lead them to experience feelings of stress that do not match their way of being. Luckily, they are quite quick to recover, easily returning to the usual ones and thus regaining their original color.

Gemini – Yellow
Yellow is undoubtedly a color that is perfectly suited to those born under the sign of Gemini. Sunny, always cheerful and open to life, their aura seems to shine like the sun. With a single smile, they know how to brighten the day of those around them and everything without making the slightest effort. Of course, there is by nature dual means that sometimes they also point towards other colors and among these a very dark brown certainly stands out which indicates the moments in which they begin to see everything black or feel oppressed by every day worries. Fortunately, like the natives of Taurus, they are people who know how to recover quickly and, when they do, they give their best, returning to shine as and more than before.

Cancer – Rose
Cancer natives mostly have a pinkish aura as they constantly turn towards feelings. Whether it’s romantic love or a simple friendship, they are people who get involved with extreme ease, experiencing a multitude of emotions that can sometimes end up overwhelming them. Another color that characterizes them, albeit only when they become obsessive precisely because of the feelings is black which tends to fill their original color with dark shades. This happens when jealousy is triggered in them or when they fear losing those they love, becoming aggressive, and risking to get to what frightens them most precisely because of their attitude. A way of doing that not everyone has, but when it occurs it can create various problems for them, making their aura darker.

Leo – From orange to brown
Although those born under the sign of Leo are solar people and who love to be among people, one cannot fail to notice in them strong self-centeredness that always risks affecting their aura. On balance, therefore, their aura is changeable, ranging from a dark orange color when they manage to open up to others and be more altruistic and going to dark brown when, instead, they are overwhelmed by the need to be the undisputed protagonists of the environment that surrounds them. When this happens, their energy changes radically, so much so that it is difficult not to notice the variations. The same ones that those who frequent them can perceive in them based on the mood they have at the moment.

Virgo – An aura that varies from deep red to blue
Virgo natives have a changing aura just like their emotions. As rational people, as they are, they are born with a bluish aura. A color that indicates tranquility and stability but which soon mixes with their vital force. The force that, too many times, are unable to channel as they would like. Thus a mixture of colors emerges that often makes them appear unstable, with an energy that is difficult to define and that constantly varies with their mood. A feature that is not always present in the natives of the sign but which is more than recognizable when it occurs, making them people with an aura that is most of the time indefinable.

Libra – A light blue aura
Those born under the sign of Libra are calm, calm, and always ready to give relief to those in front of them. This means that from birth they have an almost white aura that tends to stabilize on a light blue as they grow up. Their energy is so positive that anyone wants to be close to them to enjoy the sense of tranquility that they can convey with their mere presence. They too can undergo oscillations and when this happens they tend to go towards a dull blue very tending to gray. This color denotes how their positive energy is extinguished to make room for doubt or fears. However, it is a condition in which the natives of the sign are the first not to feel well and who therefore try to escape as best they can,

Scorpio – From Indigo to Purple
The natives of Scorpio are deeply spiritual people. Their aura, therefore, has an iridescent color that goes mostly from indigo to purple. Reserved by nature, they know how to give a sense of peace to those around them, always managing to say the right thing to give comfort. If taken by too strong and negative emotions, however, their aura can turn to dark purple, taking on a color similar to black. This happens when they lose hope. That is when they can no longer believe in everything that gives them the strength to move forward and be who they are. However, these are very short fluctuations because their strength of character always manages to keep them positive and ready to do anything to continue to shine with the light that has always belonged to them.

Sagittarius – Light brown
Those born under the sign of Sagittarius have an aura that is often difficult to define. For many, it may seem to tend to be yellow or orange but in truth the primary color is brown. This is due to their being more interested in their own emotions than those of others, which sometimes risks making them selfish. They could boast a yellow and solar aura. This, however, is constantly clouded by their thoughts and always being too focused on how people they know to move. A way of doing which they cannot do without but which in many cases ends up depriving them of the lightness they need to live life positively.

Capricorn – Dark Red Capricorn
natives have a dark red aura because they know how to be passionate and active in their way. All this, however, is often overshadowed by their way of being often too rigid. For this reason, even if they are potentially brought to red like those born under the sign of Aries, they end up dwelling on a darker and less brilliant color.
Dynamic at the right point, they focus so much on work that they never have time to take care of themselves. This creates several problems for them from an energetic point of view. Problems which, of course, also affect their aura. For this reason, it would be enough for them to learn to manage themselves a little better to change and improve, to the point of making their color, and life itself, more brilliant.

Aquarius – Celestial variable
Those born under the sign of Aquarius have a very characteristic aura because it is constantly changing. And this although the base color is a light blue which varies according to their mood.
Always over the top, they are people characterized by a very strong artistic side. This, combined with the particular character, makes it difficult for them to be understood by the rest of the world. Regardless of this, they proceed relentlessly towards their goals. Little attentive to others and what they may think of them, they, therefore, find themselves showing off an aura with a thousand different facets, which mostly depend on their way of being and the mood of the moment.

Pisces – Teal to Purple
Natives of Pisces can be said to have a rainbow aura. The colors that can be found there are different and tend mostly to shades of green. Now and then, however, you can see shades of purple that characterize moments in which Pisces find themselves in different situations than usual. Thoughtful, lovers of everything that helps them dream and resilient like few others, they hide many more resources than they show.
And, these are often the reason why their energy is so vibrant that it gives it a color-changing aura. Empathy and kindness, however, are what prevail along with a teal that is reminiscent of healing, calm, and serenity. The same that they try to convey in every aspect of their life.