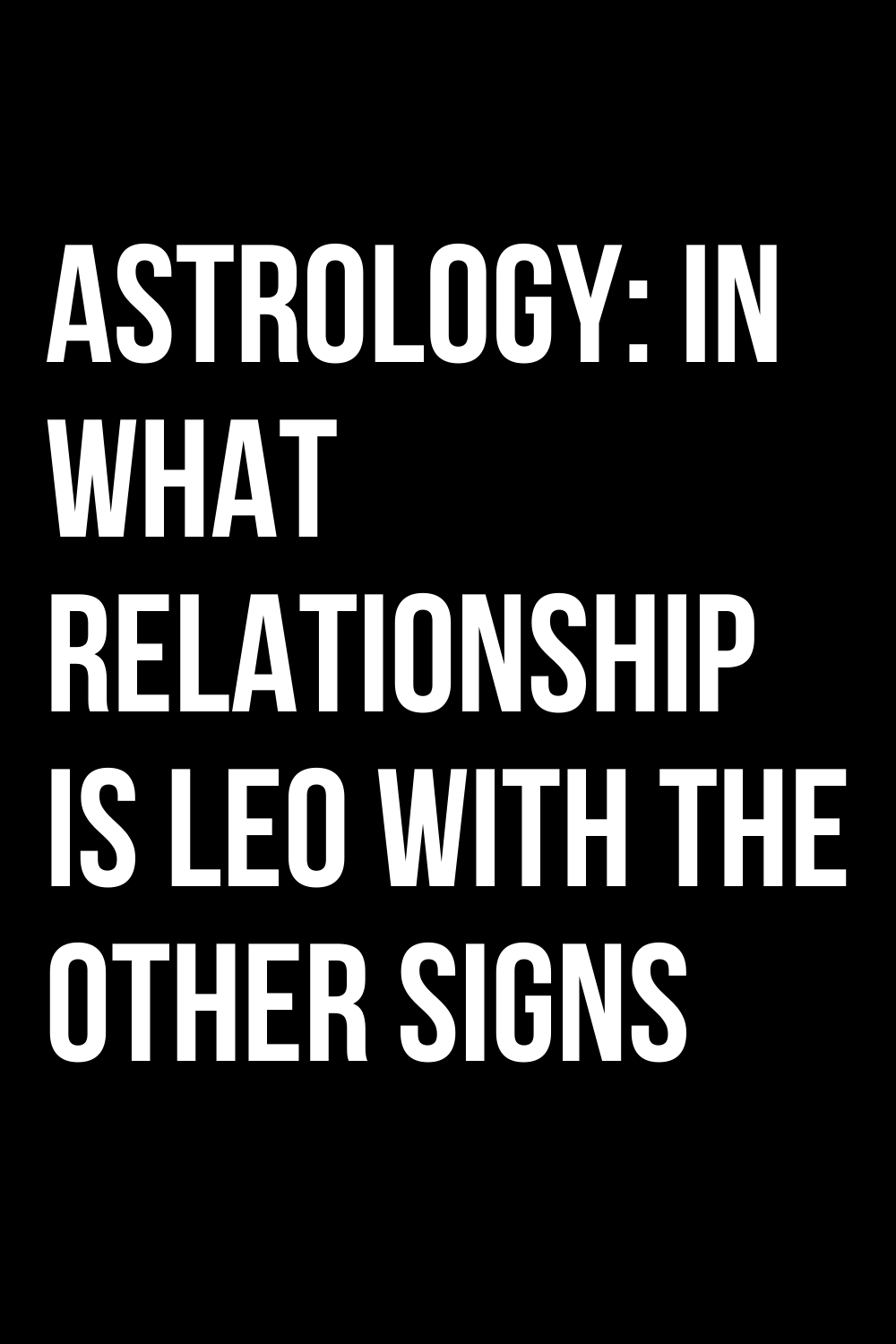 ASTROLOGY: IN WHAT RELATIONSHIP IS LEO WITH THE OTHER SIGNS

Find out how the natives of Leo are in relationship with other zodiac signs.

The 12 zodiac signs have the prerogative of all being different from each other, which is why the relationships they intertwine once they meet are equally different. For this reason, sometimes it is enough to know a person’s zodiac sign to understand whether or not you will get along and what the future may hold. Of course, the zodiac sign alone cannot say everything and to have a more complete picture it is essential to also know the respective ancestors. Nonetheless, at least on a superficial level, it is possible to understand what destiny will be met and what steps to take, if this is possible, to try to get along even when incompatibilities prevail. After all, the zodiac signs are only a guide to which personal experiences are added, character and feelings that have the surprising ability to always be unpredictable. After seeing what they are the most mysterious zodiac signs and what are the characteristics of the sign of Leo, since the latter is the sign of the month, today we will find out what are the relationships between those born under the sign of Leo and the other signs of the zodiac.

Leo – Aries
In both cases, these are very self-centered signs that always aim to be the center of attention. Between them therefore there can be hatred or love without half measures. In friendship they know how to stimulate each other but only if united by a strong bond while at work they are signs that can compete to get higher and higher, improving each other. In both cases, however, both must know how to manage their hunger for attention, avoiding entering into a ruthless competition that would only end up bringing out the worst in both. Finally, in love, they can make sparks as long as they are willing to reign together and without conflict.

Leo – Taurus
The relationships between these two signs are particularly difficult as the natives of Leo are rarely able to make themselves understood by those of Taurus. The latter do not like at all their always wanting to strut and self-confident as they are they do not hesitate to say it, thus capturing the inevitable dislikes. In the workplace, the impetuousness of the Lion combined with the calmness of the Taurus could lead to great goals, as long as both are willing to collaborate. In love, it is difficult for the two to get along, and if they do it is only because they are willing to compromise that usually corresponds to a lesser eccentricity of the Leos and know-how always on the shoulder of the Taurus.

Leo – Gemini
Those born under the sign of Leo and Gemini have several points in common that are well balanced with those in contrast. As friends, they always know how to have fun by combining the strengths that are usually resourcefulness for the former and the desire to explore ever new boundaries for the latter. At work, the risk is that they find themselves cooperating too well, ending up being distracted several times. And in love? Together they can get along extremely well if before getting serious they get to know each other and coordinate. In particular, the natives of Leo will have to learn to accept the outputs of the head of the Gemini who in turn will have to be satisfied with a place in the background to allow others to shine.

Leo – Cancer
Two extremely compatible signs if on both sides there is a desire to meet. In friendship, there will always be a continuous giving and to the truth that will push both to improve each other, even better if the working environment also intervenes in the middle. However, what these two signs do best is love that must be coordinated with Leos a little less at the center of the world and Cancers willing to accept their delusions of grandeur. By supporting each other, they will always know how to understand each other, creating truly unique alchemy.

Leo – Leo
Strange but true, the encounter between the two signs risks being extremely fiery, to the point of risking leaving victims. Wanting to excel over everyone, both friendships and work relationships are practically almost impossible, unless there is a great desire on both sides to compete and challenge each other continuously. Love is also difficult to manage and this although there is a strong physical attraction that would make it simply special. Too bad for the temper and the inability to yield that distinguishes them.

Leo – Virgo
It is difficult to establish the relationship between these two signs. Just as Leos love to act on instinct, certain of never making mistakes, Virgo natives need their times, marked by mental ruminations and decisions to be made. A friendship between the two signs would therefore be constantly out of balance, as would a working relationship even if in this case there would be room for improvement if both were to commit to this. In love, to get along they need a feeling strong enough to smooth out the many edges they have, and because of which, otherwise, they would risk getting hurt.

Leo – Libra
Two different signs complement each other in some way. In friendship, they are both able to find a balance made of laughter and pleasant moments to share where the natives of Leo are the ones always ready to act and show themselves off while those born under the sign of Libra are the ones who do the mind and who plan. everything calmly. Even at work, compatibility reigns supreme and the same could be said even in love were it not that sometimes too much passion risks involving both of us too much. When the feeling is pure, however, there are no arguments that hold up, and in the end the desire to make peace prevails.

Leo – Scorpio
Two signs too strong to get along or to decide which of the two should win. This is what can be said about those born under the sign of Leo and Scorpio who if they can give their all in friendship when they are in the workplace (unless they are already linked by other feelings) risk giving life to a rivalry. incredible and unparalleled. The same thing can be said in love where both always show themselves to the one who lives and are never sufficiently willing to come towards each other. All for a relationship that if it worked would be interesting but which in practice involves more risks than anything else.

Leo – Sagittarius
Both are always ready to have fun and socialize with anyone who comes within reach, when united by a friendship they are simply volcanic and able to compensate each other in every respect. A little less efficient at work where, absurdly, they tend to bring out the worst of each other. If we talk about love, however, there are good chances of a relationship that works and this depends on the fact that when they are together they instinctively manage to file their edges. The Leos, making themselves available to share the scepter as rulers and the Sagittarius, having fun observing them as they put themselves at the center of attention to fascinate everyone. Alchemy is difficult to explain but certainly works.

Leo – Capricorn
Here are two signs that don’t seem made to share moments. It can be said that Leo and Capricorn are at opposite poles and that they have ways of understanding and living their lives so different that they can never find a meeting point. If at work they manage to bear each other even working together, as friends they don’t seem to work at all and the same can also be said in the sentimental field where the only hopes are given by the presence of a strong attraction, the only chance able to put their agreement. The problem? They could go on fighting forever.

Leo – Aquarius
Two incompatible signs and not at all able to understand each other. The super social Leos are reluctant to understand the ongoing need for privacy of the Aquarius who in turn do not even bother to make an effort to do so. A friendship between them would therefore always be very superficial. On the working level, perhaps they would compensate themselves but always without shining. It’s love? Although there may be some sort of initial attraction between these two signs, it is really difficult for things to evolve for the better, which is why both of them shouldn’t be too close.

Leo – Pisces
Another duo of incompatibility, especially on an emotional level. A Pisces who thrives on emotions that very often prefers to keep to himself is opposed to a very self-confident Leo. These divergences make a friendship between the two signs very unlikely as well as a possible working collaboration that will always be managed on parallel tracks and rarely destined to meet. A different story is the one related to feelings since both signs seem to somehow attract each other. However, this is something fleeting that sooner or later would end up bumping into all their differences, showing both of them how difficult if not impossible a peaceful coexistence is.