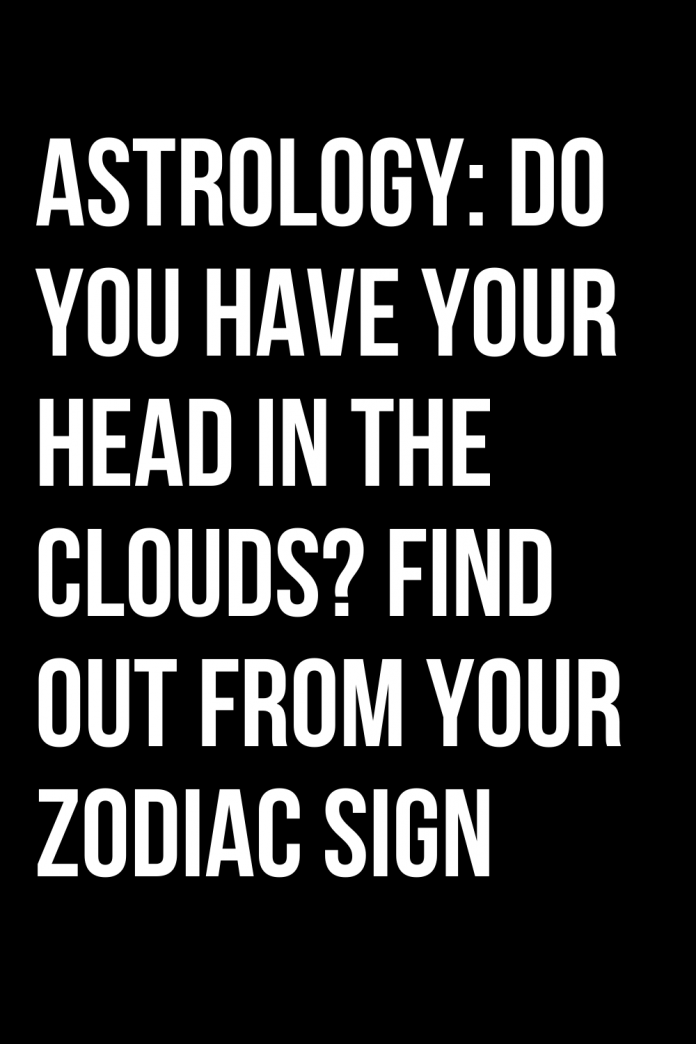 Let’s find out together which are the zodiac signs that, most of all, have the so-called head in the clouds.

Having your head in the clouds is a saying that is often used to define people of various types but who have in common the particularity of often appearing distracted, of being focused on abstract things, or of being imaginative. This is a type of people who are not always fully understood by society but who have well-evident baggage of particularities. Those who live in this way, however, often find it difficult to recognize themselves as such and realize it or are seized by doubt only when it is others who reveal the thing. Since having your head in the clouds can also depend on the influence that the stars have on us, today after having seen which are the signs of the zodiac that need to plan their lives and which those are those who live best at night, we will find out which zodiac signs have their heads in the clouds more than others and which ones, on the other hand, do not even know where the clouds are.

Aries – Those who don’t even see the clouds
Those born under the sign of Aries are so caught up in the here and now that they don’t even have time to roll their eyes to get lost in the clouds. For them, practicality is of extreme importance because it allows them to obtain what they want more easily (and faster) and this regardless of the type of desire. Practical and almost incapable of abandoning themselves to dreams, they struggle to understand those who, on the contrary, tend to stay with their heads in the clouds, so much so that they are the first to notice and criticize them, a bit out of envy of this way of being extravagant. and completely unknown but above all, because they seriously struggle to understand it.

Taurus – Those with their heads on their shoulders but their eyes towards the clouds
The natives of Taurus are among the most practical signs of the zodiac, which is why having their heads in the clouds is not one of their characteristics. Nonetheless, they are also born dreamers and love to indulge in personal moments in which to hole up in their dreams. So, even though they cannot be considered with their heads in the clouds, we can say of them that they can see and appreciate them and that often, precisely, for this reason, they feel attracted to those who live perpetually in this world that is granted to them. just admire. Beyond this, however, they always know how to divide the two things well, always showing themselves on the piece.

Gemini – Those who make up and down from the clouds
Those born under the sign of Gemini are people who are difficult to understand and who often live in a kind of duality that allows them to experience multiple modalities at the same time. So, if on the one hand, they love to be practical, on the other hand, they never hesitate to take refuge in the world of dreams or get lost in their thoughts. Since they can change their ways at any moment, among other things they are also quite eccentric, attracting the attention of others who, while trying to understand them, often have problems in this regard. We can therefore say about them that they are like on a roller coaster that takes them from the earth to the clouds and vice versa and all without them feeling upset.

Cancer – Those who like to be in the clouds
Cancer natives tend to stay with their heads in the clouds but they mostly do it of their own accord, partly because they like to appear eccentric and partly because it is a way they have to get away from things they don’t like. When they feel under pressure, they love to hole up in their world that can console them and give them time to reflect calmly on the things they consider important. Even though they are among the signs of the zodiac with their heads in the clouds, they are always able to go back to thinking in a more concrete way and, unlike other signs that live the thing spontaneously, they are also aware of their way of being and appearing.

Leo – Those who live on planet earth
Those born under the sign of Leo are people so centered in their way of life that they have neither time nor desire to stay with their heads in the clouds. Always focused on strategies capable of giving them a dream life, they are more based on calculations and reasoning and do not understand who, on the other hand, prefers (in their eyes) to waste time fantasizing rather than immediately taking action. Sometimes they are so concrete that they can appear cynical but in the end, theirs is only a way to avoid distractions and to try to reach the goals they set themselves without getting lost in secondary paths that, on the one hand, maybe more pleasant to follow, from other represent a waste of time for them.

Virgo – Those who do not even accept the existence of
Rational clouds like few others, Virgo natives live only practical experiences, closing themselves off to any possibility of letting themselves go to abstract fantasies or thoughts. For them, it is more than the normal way of life that they carry on without even thinking about it and which in some way represents a sort of lifeline. The very thought of letting go of fantasies is completely excluded for them and, precisely for this reason, they cannot understand who instead seems to be chasing their dreams without any apparent concern. An idea so far from their way of being is that they always end up freaking out just thinking about it. Let’s say the clouds are no place for them.

Libra – Those who occasionally take a trip to the clouds
Those born under the sign of Libra are usually practical and with their head resting well on their shoulders. Yet, in their way of being there is always a margin of space for fantasies and dreams to pursue to enrich their world of beautiful and pleasant things. For dreams are something to cultivate but always without exaggerating. And this is where their ability to self-control comes into play, which allows them to punctually divide between mostly practical reality and one in which to fantasize from time to time. It can be said that they are among the zodiac signs capable of having their head in the clouds but always with self-control that allows them to choose when to abandon themselves to dreams and when to return present to themselves to face everyday situations practically.

Scorpio – Those who know how to keep their heads in the clouds
The natives of Scorpio are among the most difficult zodiac signs to understand. Reserved and mysterious, they have their world made up of things that only they can understand and that seem closed to others. In this world, very often they love to stay with their heads in the clouds, allowing themselves moments that allow them to abstract themselves from everything that tires them or makes them sick. On their side, however, they also have a practical sense that allows them not to live completely in the clouds and to do so only when they know they can afford it. For this reason, they are among the zodiac signs that despite being in the clouds are not surrounded by them and always know how to keep an eye on planet earth.

Sagittarius – Those who do not have their heads in the clouds at all
Those born under the sign of Sagittarius, strange as it may seem, are not people with their heads in the clouds, and this even though they love the idea of ​​making it believable. Although focused on themselves and always eager to indulge in dream life, they are more practical than you think. For them, living with dreams is quite difficult and they often find themselves envying those who succeed, considering them as people able to travel to places that are closed to them. For this reason, even if they try, they remain mostly rational, positioning themselves, on a hypothetical scale, halfway.

Capricorn – Those who appear distracted but not with their heads in the clouds
The natives of Capricorn are always so busy with the many commitments they have that they can experience a form of fatigue that often appears distracted. Although this way of making them appear in some ways with their heads in the clouds, in reality, theirs is pure distraction. Their practical sense and the need to always excel in what they do prevents them from having their head in the clouds, leading them to be more practical than ever, perhaps in a way that is not always conventional but still effective for their lifestyle.

Pisces – Those with their heads totally in the clouds
The natives of Pisces live perpetually with their heads in the clouds. Lost in their world made up of fantasies that are often the basis of their decidedly strong artistic sense, the natives of the sign are in fact among the signs of the zodiac with the greatest ability to abstract themselves from everything and everyone to take refuge in a world of their own, made of words and images of which they are the only spectators and which they know how to translate into emotions that others would not be able to understand in any way. Lovers of all that is romantic and linked to the world of dreams, while aspiring to greater practicality, never know how to resist the charm of fantasies which, in their case, are constant and perennial, almost an extension of their way of being.