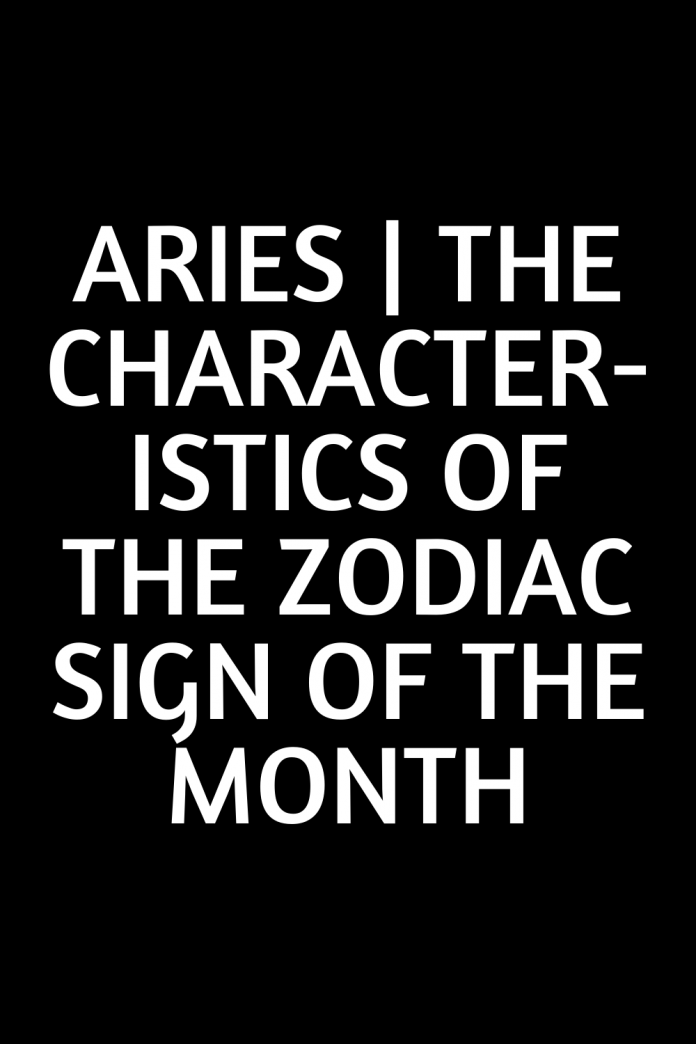 Let’s find out together what are the characteristics of the zodiac sign of the month: Aries.

On March 20 we officially enter the month of Aries which is also the first zodiac sign of the zodiac. So let’s find out what are the main characteristics of those born under this sign and what are the curiosities that concern them.

Aries is the first sign of the zodiac that comes after the close of the sign of Pisces and immediately before the zodiac sign of Taurus. It is an extremely vital sign like the one who opens the new circle. This makes the natives of the sign rather open to novelty and little inclined to anything that is static or that “threatens” to last forever.

The sign of Aries in general
Those born under the sign of Aries are usually people full of vitality and enthusiasm for life. Cheerful, carefree, and always ready to experience new emotions, they tend to prefer action to everything else. This leads them to be more physical and less cerebral and to always push themselves one step ahead of the day before. Self-confident and sociable, they are particularly self-centered and love the thought of being noticed by others. This is why they always go out of their way to show off and attract attention, both positively and negatively.

Direct with others, they don’t have much trouble saying what they think. And this often leads them to hurt the feelings of those close to them. Something that they almost don’t notice and about which, in any case, they don’t care too much. That said, they know how to be good company, love to chat, and always tend to show curiosity about the life of those around them. Often lacking intact, they know how to compensate for this defect with a breezy way of doing things that tends to put everyone at ease and, above all, in a good mood.

Unfortunately, due to their way of doing things, they can sometimes be misunderstood and end up hurting the most sensitive people who may resent their ways. Luckily, most of the time they still manage to solve the problem by finding a meeting point, and when they don’t, they don’t get too much trouble ignoring the issue altogether and doing what they do best, moving on.

For Aries natives, work is a bit of a controversial topic. If on the one hand, they aim to make a career and to establish themselves, on the other hand, they do not like the idea of ​​having to work too long on this. Nonetheless, when they feel it’s worth it, they know how to put in enough effort to achieve their goals.

As colleagues, they are cheerful and nice but not always reliable. First of all, they will always put themselves on and if that means bypassing someone, they are not the type to have big problems about it. For them, professional growth is a kind of battle on the field and for it, they are ready to draw every possible weapon. Doing so also helps them feel more motivated and fight more enthusiastically. A flat working life would end up boring them.

Good leaders, always know how to give orders. Sometimes, however, they can be not very understanding with those who have to do with them. This leads them to conflicts that, if not resolved quickly, risk becoming a source of tension. Which gets worse when they let themselves go to wanting to control the situation at all costs.

Extremely inclined for sport, if they make it a real activity they know how to give their best without feeling fatigued. This is due to their being highly competitive and passionate about everything that includes action. It is therefore a very specific branch in which they are so carried that they have practically no rivals.

In relationships, those born under the sign of Aries, are self-confident and sociable to the point of being able to make friends with anyone who crosses their path. Cheerful and communicative they are sought by everything because when they want they can be the soul of the party. Independent at the right point, they demand their dose of freedom. Which they tend to leave to others as well, even if in some relationships they can be more possessive than in others.

In friendship they tend to be more relaxed, ending up giving themselves more freedom of action and thus giving something more to those who have a lasting relationship with them. Good friends, know how to listen and give advice but always with limits given by having to be mostly at the center of attention. For this reason, they are not exactly predisposed to cultivate long-term relationships to which they often prefer new friendships and are in line with the mood of the moment.

In love, they have a particularly complex way of acting. If on the one hand, they dream of great love, on the other they tend to flee whenever a story tends to get serious. This depends on their nature as free people and completely opposed to rules to follow, even those essential to carry on a love story.

Sometimes they tend to betray even if they are in love and this may depend precisely on their need to claim a form of freedom that they always fear they could lose if they fall in love.
Other than that they have no major problems flirting with others and they can turn out to be excellent conquerors, as long as the person on the other side arouses their interest enough.