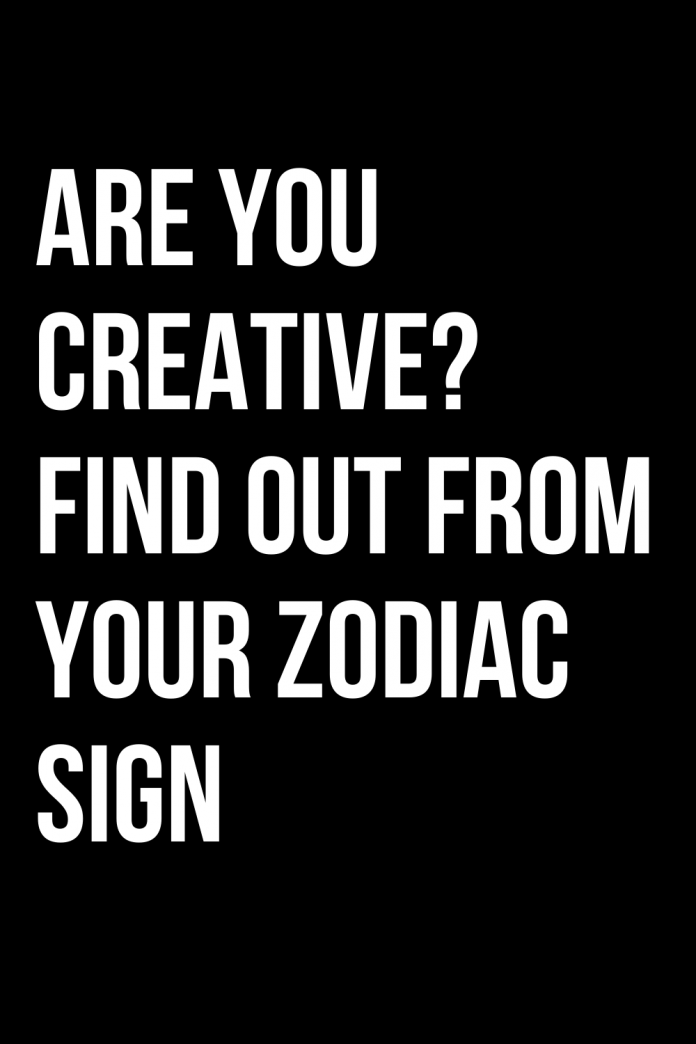 Find out if a creative person is hiding inside you, full of ideas and the precious ability to give life to something.

Creativity is a gift that can be cultivated over time but that some people possess in a particularly high way. There are various ways of being creative and based on them you can give life to something, find solutions where others do not see, or live a life as an artist. Although creativity is a mix of attitude and lifestyle, the stars have a particular influence on the people who possess it, giving them this sort of timeless “genius” and able to make them somehow special.
Today, therefore, after having seen which are the most fragile signs of the zodiac and how to flirt in the right way with the person we like, we will try to find out whether or not we are gifted with creativity.

Horoscope and creativity. Here are the most creative zodiac signs of the zodiac.

Aries – More than ingenious creatives
Those born under the sign of Aries are not creative people in the strict sense of the term, but they can strive for the most absurd things such as excuses for forgetting or an excuse for not doing something. In some way, it can therefore be said that at least in the theoretical field they are bearers of certain creativity which, however, should not be confused with that of an artistic type, that is, capable of giving life to something. In their small way, however, they manage to find solutions to problems that others would not be able to solve and this is also thanks to their practical sense that in some cases goes well with the desire to get what they want in the shortest possible time and, possibly, without effort.

Taurus – Moderately creative
The natives of Taurus have the creativity of their own that is usually expressed in the way they organize (which is creative) both their things and their study or work programs. Perhaps they will never express themselves through notes or words but they could do a lot with manual work. In the same way, thanks also to their innate gluttony, they can excel in the kitchen, creating original and delicious dishes. It is a creativity that must be cultivated and cared for over time but which, if carried out with the right determination, can give them various satisfactions.

Gemini – Creative in Thinking
The creativity of Gemini is expressed almost exclusively through thought. Brains like few know how to make everything alternative, often offering interesting insights on whatever topic is of interest to them. This does not lead them to create something in the artistic field but to live an eccentric life based on a sort of creativity that is difficult to define but which they know how to contain and modulate according to the needs of the moment. Often misunderstood precisely for this aspect, they are taken for people over the top and with the habit of appearing more original than they are. They rarely find themselves faking what they are and however strange everything they think, say, or do is their own thing.

Cancer – Half Creative
Those born under the sign of Cancer are creative in theory but not in practice. Although occasionally they manage to think creatively, in fact, laziness and the lack of time to apply themselves often lead them to give up all intentions and let things die without putting them into practice. We can therefore speak of half creativity, something that only the most eager to develop their skills will be able to carry on and that will still require a certain amount of commitment and a lot of practical work that, in the long run, will certainly lead to satisfactory results.

Leo – Not very creative
Those born under the sign of Leo are too busy with themselves and the need to always appear at the top to give vent to a form of creativity. Of course, they have on their side a thought that can change according to circumstances and the ability to work on themselves to reach a goal. From an artistic point of view, however, they are not particularly gifted and indeed lack the basic characteristics and the right sensitivity to carry out any artistic project. All this, however, does not represent a problem for them, being more projected on practical results than on sectors otherwise difficult to carry out.

Virgo – Not at all creative
The natives of Libra do not have any creative streak and even if they did, most likely, they would be the first to ignore them. For them, above all else, there is absolutely reason and the desire to know things from a practical point of view. A way of thinking that makes any form of creativity impossible to the point of not even making them want to have it, although they still manage to appreciate that of others, should it prove up to their expectations and able to lead to something like, for example, a wealthy life.
In a nutshell, they can be defined as the anti-creatives of the zodiac and at the same time the most practical and ingenious from a technical point of view.

Libra – Very creative
People born under the sign of Libra are very creative people, especially when it comes to manual work. Equipped with imagination and a strong aesthetic sense, they are particularly suited to the arts and have the particular gift of being able to embellish anything. Very often this sort of creativity is expressed in the choice of furnishings or the look they adopt, others in the work they do, and still others in tasks that concern the world of art. Eclectic and curious about everything that concerns them, they live by feeding on beauty and know-how to bring it into everything that surrounds them.

Scorpio – Surprisingly creative
The natives of Scorpio, contrary to what one might think, enjoy strong creativity that pushes them to be inclined to writing as well as to the arts in general such as, for example, music. Their love for everything that extends beyond the common reality and the depth of soul make them observers of the world always ready to grasp the beauty to rework it differently. Their ability to create is therefore particularly strong and such as to make them real innovators in what they do and all thanks to the image they have.

Sagittarius – Almost not creative at all
Those born under the sign of Sagittarius like to call themselves creative, in reality, however, they are almost not creative at all. While they love to travel in the most literal way of the term, they are not able to do it even with the imagination, and when they try they find themselves having to collide with a reality that is rather hard for them. On the other hand, they often feel attracted to those who manage to live with their creativity. What drives them is probably a desire for emulation which, however, fails to materialize, leaving them often and willingly with a sense of dissatisfaction capable of pushing them towards moments of discouragement and apathy. Fortunately, their desire for revenge always manages to get them out of everything and put them back on track, albeit no less predisposed to making the same mistakes. But that’s also part of their appeal, isn’t it?

Capricorn – Ideally Creative
The natives of Capricorn possess certain creativity that lives mostly in their thoughts. In practice, they are not at all used to creating something but rather to studying and analyzing what they have in front of them. With the right commitment, they manage to push themselves to a certain point beyond which they are unable to go, forced to surrender to a limit that is almost always insurmountable for them. That said, they can be inspiring for many thanks to their intuitions and thoughts full of ideas for those who live their creativity more actively.

Aquarius – Creatives in their spare time
Those born under the sign of Aquarius are original people to the point of being considered potentially creative. Their lack of desire to spend and commit to something in particular, however, makes them unwilling to give life to something. Sometimes, they can have brilliant ideas and be able to leave them still for years. A way of doing typical of their way of being, always able to surprise others. Nevertheless, the artistic vein is present in them and it takes very little to transform it into something more. To the point that if they wanted to, they could even live off their creativity.

Pisces – Extremely Creative
People born under the sign of Pisces are extremely sensitive and consequently creative people. It is all-around creativity, which can range from skill in the kitchen to talent in writing or figurative art. Art is part of their way of being, to the point of defining them. Even temperamentally, after all, they show themselves distracted, brilliant, sensitive, and always ready to give life to something. Perhaps no one better than them can convey the idea of ​​creativity that they always know how to express in great style and in which they can impress all their particular way of being.