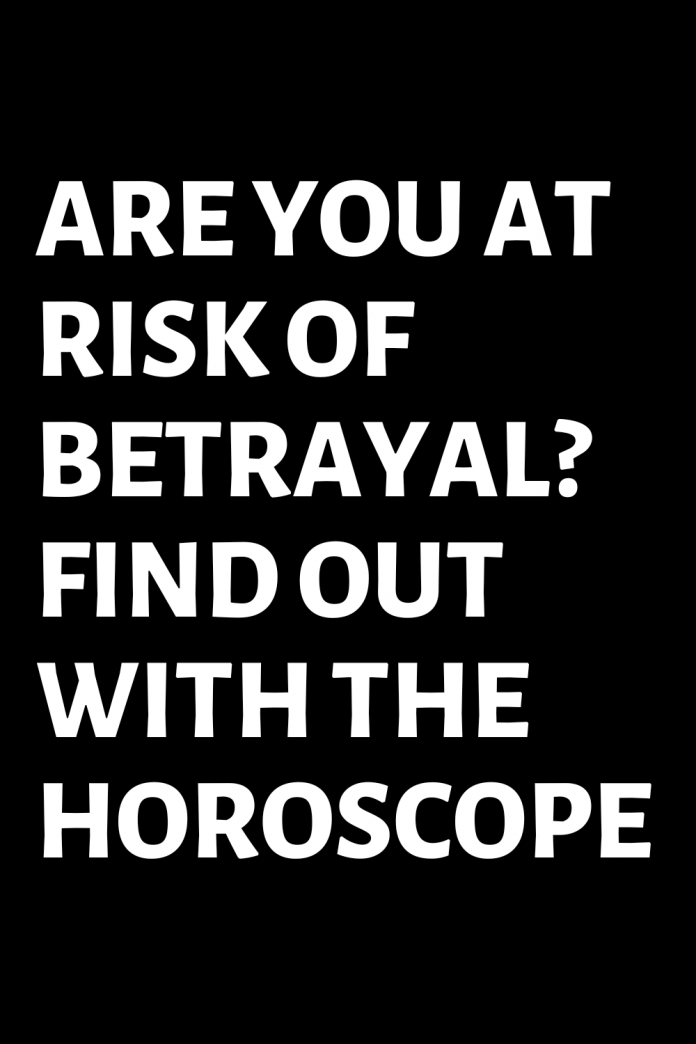 For the stars, betrayal is also one of the behaviors that can be influenced by the stars.

Are you recently with your boyfriend and want to try to understand if you can really trust him? Let’s face it clearly, that of betraying or remaining faithful is a choice that varies from person to person, which can change at any moment and which is difficult to predict since in the middle there are human emotions which, as such, have always been unpredictable. Yet, according to the stars, there are signs of the zodiac more prone to betrayal than others. Do you want to know which ones? You just need to keep reading. Remember, however, that the influence of the stars affects only a minimal part of our way of doing and thinking and if your other half really loves you, it will certainly not be a tendency to change their way of acting towards you. Furthermore, it should always be remembered that, beyond the signs, also the calculation of the ascendant is very important as it can amplify or mediate certain inclinations. Having said that, let’s try to play a bit and guess which are the most faithful and unfaithful zodiac signs of the zodiac.

The signs of the zodiac and fidelity

Aries – The narcissist
Generally, those born under the sign of Aries tend to go hunting to assert themselves and to confirm their charm for themselves. If they are really in love and satisfied by the story they are experiencing, they do not usually betray but if the relationship is at a standstill for them and they are already considering how to put an end to it, the right person at the right time could push them not to worry too much and to leave. towards a new conquest.

Taurus – The wavering
His life is a constant precarious balance on the thread of fidelity. A very thin thread in which those born under this sign tend to oscillate, constantly prey to their emotions. It may happen, therefore, that after a fight or during a period of pause, his weakness leads him into temptation. The feelings of guilt, however, will be so great as to lead him to apologize in a thousand different ways, making you understand immediately.

Gemini – The capricious one
Those born under this sign need a lot of attention from the people they surround themselves with and especially from those who say they love them. The lack of attention can therefore represent a valid excuse to look around, perhaps looking for someone who can understand them and make them feel better. In their case, rather than betrayal, it is precisely a change of partner.

Cancer – The super jealous
If he feels loved, the one born under the sign of Cancer tends to be faithful and has no eyes for anyone else. If his self-love of him is put to the test, however, in order to take revenge he could even betray. Never make him feel unloved, then. The key to a story that works and lasts over time lies precisely in the attention you choose to dedicate to it.

Leo – The Confident
People born under the sign of Leo are confident enough not to feel the need to betray the person they are with. For the same reason, undergoing a betrayal would make them particularly irascible, leading them to do the same but then, on balance, close the story definitively.

Virgo – The habitual
Those born under this sign tend to be quite habitual. A fixed story is what he yearns for and he cares little about seeking other conquests. Woe to not make him feel appreciated, however, in that case he would start looking around without bothering in the least to hide it. The lack of attention, in fact, is experienced as an outrage to which one can therefore respond in any way.

Libra – The faithful
It is difficult for someone born under this sign to decide to betray. If he does it is only because you are so distracted that you do not notice that person clearly in love with him and ready to woo him in any way. To hold him tight, just make him feel loved. And if you’re together, it shouldn’t be that hard, right?

Scorpio – The waste of hearts
Those born under this sign have always had the reputation of a traitor. In reality it is more about going for conquests, without ever stopping anywhere. If in love, however, he can be truly faithful. Of course, as long as the thing is mutual and that love is shown to him in a more than evident way. If he feels that he has taken a back seat, in fact, the risk is not only that of betrayal but also of seeing the story suddenly end.

Sagittarius – The one in search of new emotions
That those born under the sign of Sagittarius are difficult people to bond is a well known fact. Claiming loyalty from them is therefore quite difficult. Their way of seeing life and relationships is in fact quite open. But, as always, with love in between everything can change and if your story is not seen as a bond to be feared but as something strongly desired, then you can sleep peacefully.

Capricorn – The reliable
Yes, in love this zodiac sign knows how to give a lot, especially in terms of presence. It is really difficult for him to choose to cheat on someone, taken as he is by trying to make ends meet and everything that has value in his life.

Aquarius – The Unpredictable
It is difficult to understand what an Aquarius thinks. His mild but at the same time eccentric temperament leads him to avoid betrayal but to be particularly tickled by the idea if in the presence of a person able to fascinate and surprise him continuously. What if you try to be this person?

Pisces – The Romantic
Those born under the sign of Pisces strongly believe in love, which is why it is really difficult for them to choose to cheat. For them, their word and trust are important values ​​that it would be a real shame to break for an adventure. But if they are in love, things can change, leading them first of all to change partners. So, just make sure you continue to be the one in his heart and you can rest easy on his faithfulness.