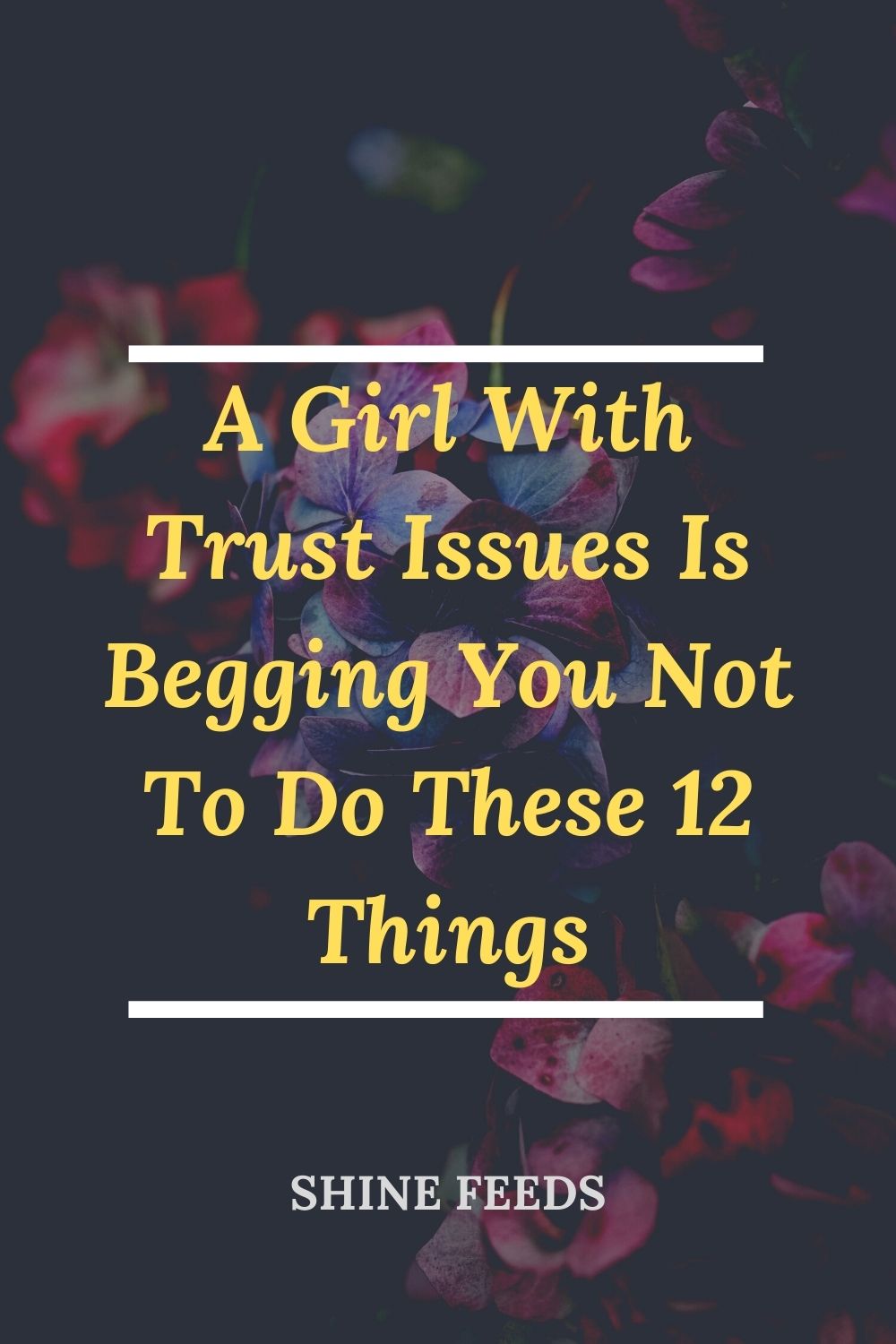 A girl like that will think the worst. Every time. Don’t let the woman you love to worry about where you are and what you’re doing.

Don’t let her imagine you in a ditch somewhere lying helplessly. Just send a text, so she can sleep.

This was a problem for her long before you came into the picture.

You have nothing to do with that. Either you can try to understand her or you can walk away.

Don’t expect her to change who she is—just be there for her.

Don’t come near her if your intentions aren’t pure.

Don’t waste your time and hers. You cannot mislead a person with trust issues.

Over time, women with trust issues have developed an intuition when it comes to people.

They exactly know whom to trust and whom to doubt. You can’t play her, so don’t even try.

Don’t flirt with other women.

I know that flirting is not technically cheating, but to your girl it is.

Anything that has to do with even the slightest violation of her trust is a red flag for her.

So, if you really love her and you care for her, you won’t flirt with anybody, even if it’s harmless. It’s not to her. Respect that.

Don’t lose it while you’re with her.

You have to be patient. She is the type of girl who won’t give herself to you right away.

She will be cautious, and it will take a while for her to let her guard down. Don’t force making the first move. Wait for her to do it.

Then, you’ll definitely know she’s ready, and that will be a moment you will remember for the rest of your life.

Never avoid answering whatever she asks you.

If you’re uncomfortable talking about whatever she asked you, be honest, and admit it.

She’ll cherish that and respect it more than lying to her.

Lies can only arise suspicion about your relationship which is enough for her to start finding the way out.

You don’t even have to be a good listener, but at least try to pay attention, and try to listen to what she’s telling you.

As I’ve already said, you don’t have to be good at it—she’ll appreciate the effort anyway.

Lying is out of the question.

Don’t lie even about the smallest of things. If she catches you in the whitest lie possible, she’ll never trust you again.

It all starts with losing faith in someone. It will all go downhill from there.

Don’t be stuck on just words.

Actions do matter. So please, support what you’re saying with actually doing that something. She needs this.

Never give her a reason to doubt you.

Girls with trust issues don’t need much to start doubting, so in that spirit, keep your promises.

When you say you’re going to do something, do it. If you think you can’t then don’t say you will. The bottom line is, just be honest with her.

Never joke about cheating and never cheat on her.

Maybe to you, joking about finding someone else is funny, but it’s not funny to her.

She will take you seriously, maybe she’ll even pretend to share a laugh with you, but inside she’ll be hurting.

Don’t be too obvious when you’re around attractive women.

No one is saying you shouldn’t notice a hot woman walking by, but you don’t necessarily have to drop your jaw and drool over her.

Play it cool. Check her out for a second, and try not to let your girl see that. She won’t mind as long as you’re cool about it.