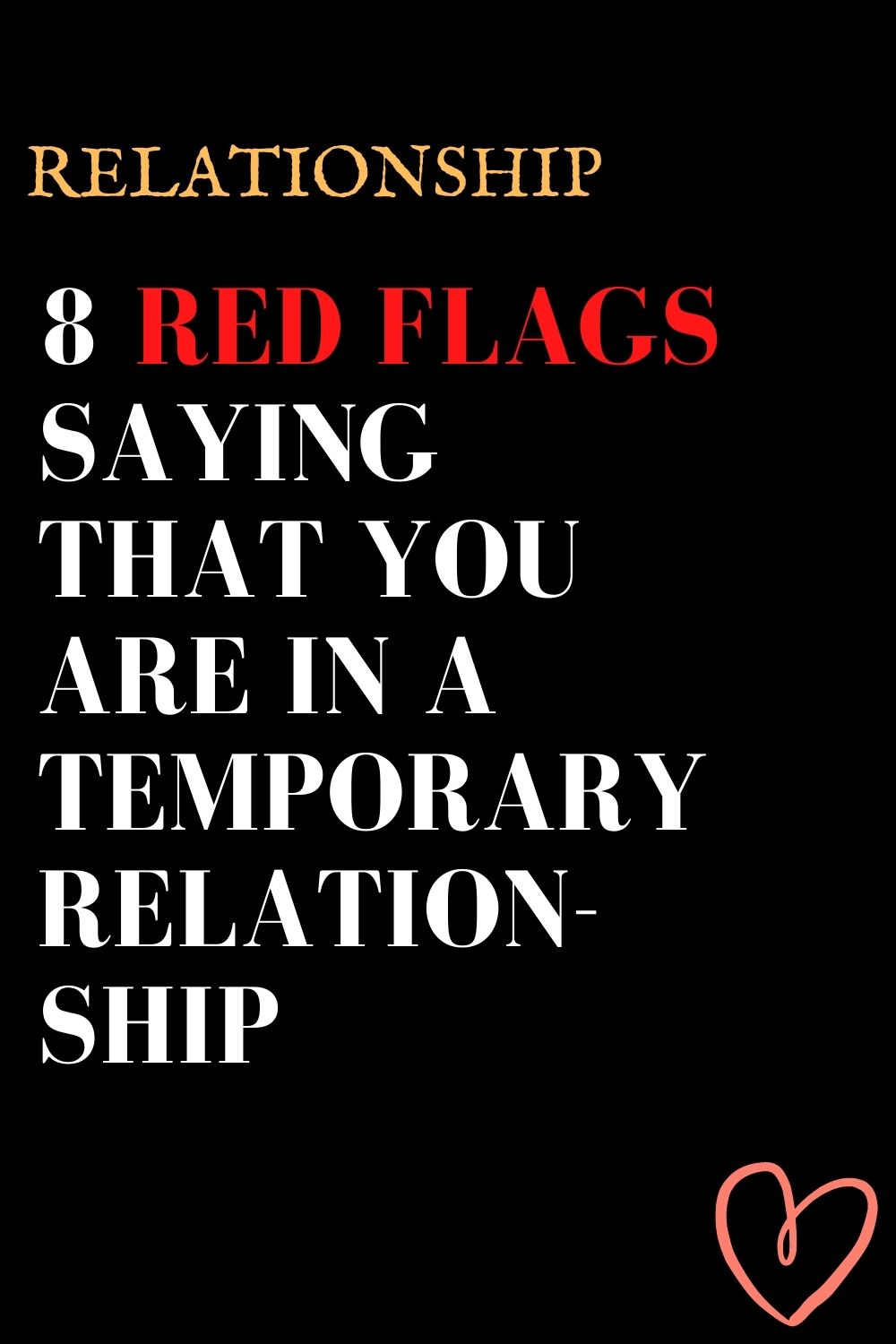 1. He is big on texting (but nothing more)

This sounds a bit strange but if he only texts and never calls there is something funky-smelling right there.

You see, in the era of modern dating, a guy who craves closeness will find time to make a video call, or at least an ordinary call to hear your voice.

If he really hates talking on the phone, calls from him will be rare but if he is not thinking about something long-term, they will be non-existent and he will probably not answer your calls either.

2. He never gives you a straight answer

He is trying to present himself as a ‘go with the flow guy’. He never knows what’s going to happen next, where he’s going to be or what’s he going to do.

Doesn’t all of this sound like he is only doing things at his own convenience?

The right guy would plan dates and for the better part of the time, he would know when he is able to see you. If he is vague about everything, you are in a temporary relationship.

3. You don’t know that much about him

Even the most guarded guy will slowly start to open up to the woman he is seeing, if it is something more serious with her. He will talk about his friends, family, habits, work, and childhood memories.

He will have an unconscious desire to do all of that. He will want you to get to know him and he will want to know everything about you.

But if your relationship is temporary, he will create a distance by talking about some superficial topics or only giving you short answers to your questions about anything personal.

There is one more thing temporary people tend to do, which is talking too much about things that are not so important, like his favorite movie, sports, drink, food, or trivial stuff.

By doing that, he is making you believe that he is telling you everything about himself but when you really think about it, you don’t know that much about him.

4. The future is a forbidden topic

If he hates talking about the future or he skilfully avoids talking about it after you’ve been together for a couple of months, you can be sure that he is not ready for a long-term relationship.

By not saying a word about the future, he is actually saying that he doesn’t know whether he is going to be there next month, in a few months’ time, let alone in a year.

With him, everything about the future ends and begins with, “We’ll see….”

5. You don’t see each other that often

Unless you are in a long-distance relationship, there is no excuse for not seeing each other regularly.

When a guy is really into someone, he will find time to spend with them. He won’t neglect his friends, family or his work but he will always make you a priority.

If he is treating you as a stop along the way and you see by the way he behaves that he just stops by when he has nothing better to do, he is just someone temporary in your life.

6. You can’t shake the feeling that something’s off

In the first few months of a relationship, you should be over the moon with happiness. But if you are plagued by the feeling that something doesn’t add up, don’t ignore it.

In nine times out of ten, you can rely on your gut to guide the way. Take a step back and try to determine what is exactly wrong and if you notice anything in his behavior that sets off your inner alarm and tells you to be careful.

7. He’s an entertainer (and not by profession)

He has an impeccable sense of humor, which is a good thing. But he makes everything into a joke, which is very bad and concerning.

By acting funny, he avoids having a real conversation, especially when you stumble upon a roadblock.

He won’t solve an issue or discuss a problem—he will do his best to make you laugh and in that way, make you forget what the problem was.

After a while, you will be frustrated because you won’t be able to form a deeper connection with him because of all the humor.

He is still at the ‘party all night, sleep whole day’ stage and there’s no saying if he’s ever getting out of it. He might still be living with his parents or he might even embarrass you in public with his childish behavior.

With this immature behavior comes emotional behavior too. You will be able to see this by the way he avoids commitment talk or pulls away every time things get tough or complicated or if he thinks about his own needs only.

If this happens, you are definitely in a temporary relationship because an immature guy is never in anything serious or long-lasting. He’s not ready for that.