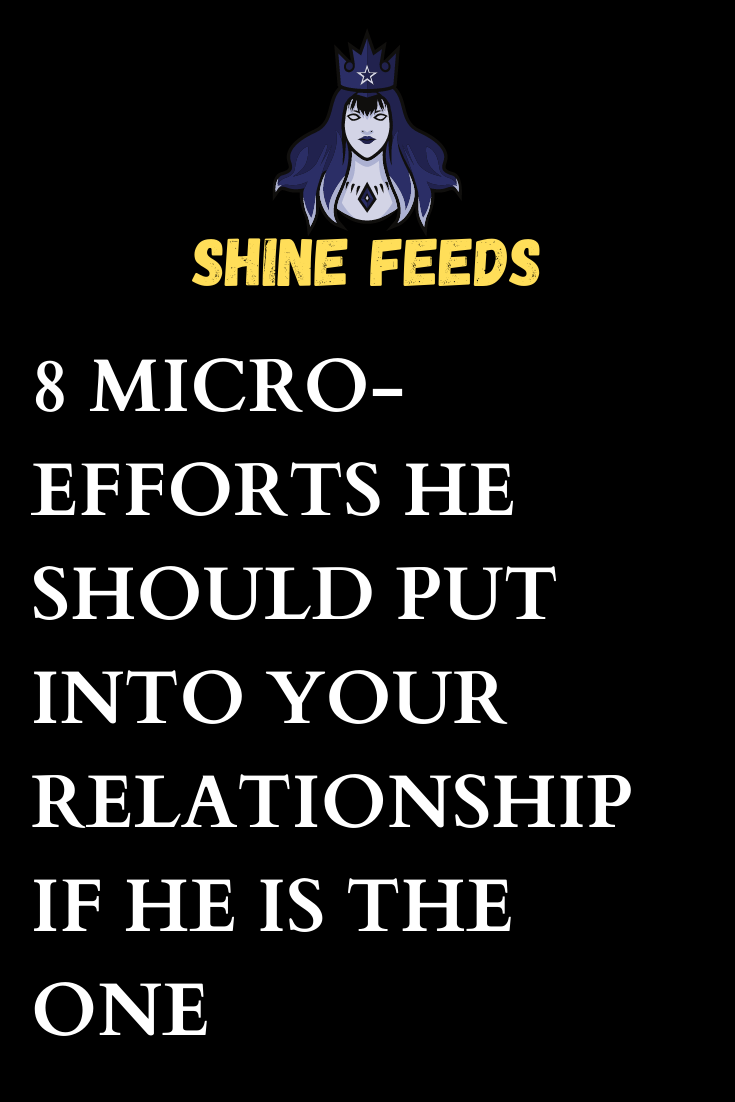 A relationship is a two-way street, and couples should make equal efforts for each other. Sometimes women forget that and go over and beyond while men take for granted everything that they do.

These micro-efforts are here to remind men of all the things that they should do for their significant other without giving it too much thought, to remind women that they deserve someone who knows how to reciprocate all that they are giving, and that only a man who makes an effort is the one.

If he is the one, he should…

There should be a rule that says that couples need to hear from one another at least twice a day. Although 3 texts a day would be just perfect: good morning, afternoon and a goodnight text for better sleep.

This is especially important for couples who don’t see each other often, so the texts are what gives them that feeling of togetherness.

If he is the one, he will text you first at least once a day because he won’t be able to stand not hearing from you for an entire day. A man who says that’s not true is a liar.

2. Show affection without an agenda

Cuddles, kisses, hugs often say ‘I love you’ more strongly than words ever will. They are there to show love, affection, warmth, and even comfort.

So if he hugs you a lot, kisses you every time he is saying goodbye, and cuddles with you often without trying to get into your pants every single time, it’s all a good sign that he is the one and that he has feelings that are stronger than anything he can say aloud.

This is really a micro-effort even though most men today act like they should get a reward for finding time in their busy schedules. If you are making time for them, they should make time for you. It’s that simple.

So don’t buy into the “I am too busy.” BS excuse. When he is the one for you, he will make time—there is no doubt about it. No matter how busy he is or what he has going on, you will see that he is making an effort to be with you.

4. Send a random text to remind you that he is thinking about you and that he misses you

I am not saying he should flood your inbox with messages but that kissing emoji in the middle of the day or plain text of few sentences will have I miss you written all over it.

This text doesn’t have to arrive every day, but it’s nice if he sends one every now and then just to remind you how special you are. I bet you are doing the same for him.

5. Worry about your thoughts and feelings

Most men are not in touch with their feelings like women are, and a lot of things can happen to a woman emotionally that they won’t even detect.

But if he takes the time to ask you how are you or notices that you are behaving differently, that’s exactly the micro-effort you need. It shows that he cares about your wellbeing and that he wants to contribute to making you feel better.

It doesn’t have to be all the time, but it’s really nice when a man plans a date regardless if it’s going out or staying home.

It can be something as simple as making you lunch after a hard day’s work, making you a bubble bath or planning a night out full of fun things to do. The important thing is that he tries and that his efforts are visible.

Tucking you in when you fall asleep on the couch, remembering something you said while back, making you coffee in the morning, even taking out the garbage will take him just a few minutes but will make your whole day.

Doing things that he knows will help you and make you feel good is what it is all about. If he is the one, he won’t waste his words in reassuring you that he loves you. He will do these little big things to show you he cares.

If he is selfish in bed, he will be selfish in every other aspect of the relationship, and that’s just wrong on so many levels.

That’s why the right one for you should show you the difference between having s*x and making love by putting your pleasure first.