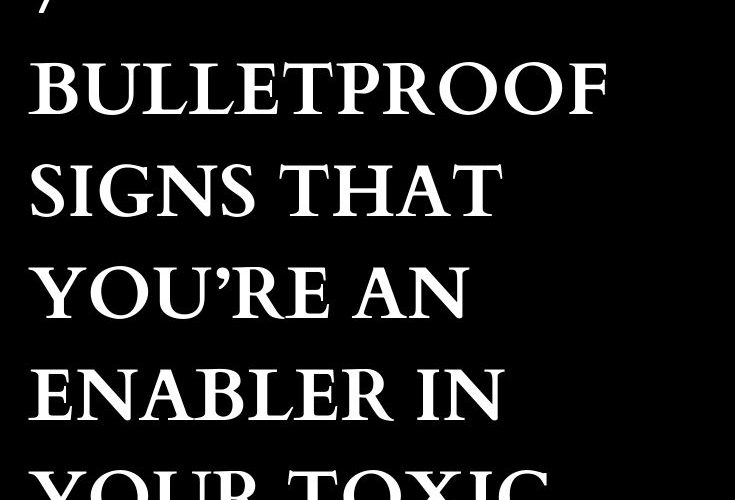 When you spend some time in a toxic relationship, an enabling attitude becomes your coping mechanism.

Basically, without being aware of it, you begin to act in a manner that allows your partner to continue with his toxic games.

You’re creating an environment in which he feels safe to continue with his toxic behavioral patterns and consequently, you’re supporting the unhealthy dynamics of your relationship.

Don’t get me wrong. I’m not trying to blame you for the fact that you have a toxic partner. No matter what, always remember that you’re the victim here.

However, I only want you to become aware of your enabling practices, so you can stop doing them and be one step closer to saving yourself from this destructive relationship.

1. You keep on saving him

The first red flag that you’re an enabler in your toxic relationship is the fact that you put so much effort into trying to save your partner, even though deep down you probably know that’s utterly impossible.

In fact, most of the time, you’re trying to save this man from himself. You see yourself as this superwoman whose duty is to pull him into the light and chase away his darkness.

2. You always forgive your toxic partner

Let’s be honest here. How many second chances has your boyfriend gotten from you? How many times have you forgiven him for the way he’s treated you?

I bet you can’t even remember, can you? Well, the worst part is that by now, you’ve started forgiving him even before he apologizes.

You are always looking for excuses for his toxic behavior. Basically, you keep on justifying him and looking for ways to forgive him, so you can justify your staying with him.

3. You avoid conflict to keep the peace

Another sign that you’re an enabler is the fact that you do everything in your power to avoid any kind of arguments in your relationship.

I’m not saying you should be constantly picking fights with your boyfriend without a valid reason.

However, there is a great difference between avoiding all types of conflict because you’re scared of his reaction and trying to resolve things in a peaceful way.

Basically, you’ll remain silent even if you disagree with him because you know that even the smallest issues can cause hell in your relationship.

4. You think that he’ll change

Almost all enablers have one thing in common: false hope. You wouldn’t be in this relationship if you thought things would remain like this forever, would you?

So, instead of seeing the harsh reality, you live in a dream. You’re convinced that this is just a phase in your romance and you refuse to accept that your boyfriend is really a toxic person.

You do your best to make him change his ways, without realizing it’s an impossible feat.

Whatever happens in your relationship, it’s always your fault. Whenever something goes wrong, you’re the only one to blame.

In fact, most of the time, you’re the one who consciously takes over the entire responsibility for things you aren’t guilty of.

Not only that, you also take responsibility for your other half’s words and behavior. You can’t seem to grasp the idea that he is an adult who should stand behind his actions – without you babying him.

6. You defend him in front of the world

If you’re an enabler in your toxic relationship, you have this uncontrollable urge to defend your partner in front of everyone else, including your closest friends and family members.

You hide his bad behavior and try to present him better than he actually is.

Well, tell me one thing: Why would you have the need to do all of this if he isn’t doing anything wrong?

I guess that deep down, you know perfectly well that he’s the bad guy here and you’re actually ashamed of your relationship.

7. You deny that you have a problem

What is common for every enabler out there is that they refuse to accept there’s a serious problem in their relationship.

Therefore, if you keep on denying that your romance is toxic, despite all the signs you’re in a toxic relationship, you’re without a doubt an enabler.

You’re a smart girl. You see all the red flags and people have been warning you about your relationship.

However, it’s easier for you to sweep things under the carpet than face them.

If you had to admit that you’re in an unhealthy relationship, you’d have to do something about it – and that’s exactly what you’re trying to avoid.