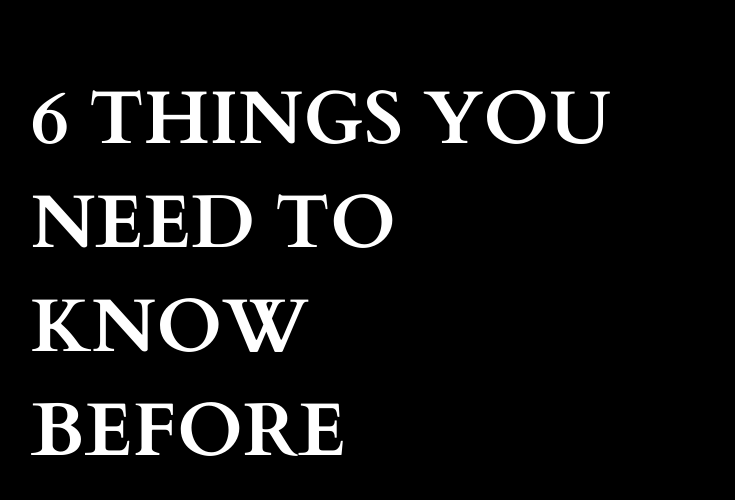 6 Things You Need To Know Before Choosing The Right Guy

It’s hard to maintain a quality relationship nowadays. You can see marriages and relationships falling apart every day.

You can hardly browse the Internet without seeing some celebrity couple calling quits on their relationship.

And I bet it has happened to you a number of times. You thought you’d finally met a guy who will make love easy, who is going to be there for you for the rest of your lives, but your bubble burst soon and you broke up.

Then you gave up hope, decided you’re going to stay single, but then another one came walking into your life and the same thing happened all over again.

You were going in circles and the only thing you got from it is that you got dumped.

So, that makes you wonder. Wouldn’t be great if there was some kind of manual to a long-lasting and a happy relationship, directions that would exactly show you is he worth the bother or not?

Yeah…but you know that there is no such thing.

Instead, give it all you’ve got, have faith that every next guy might be the one because in the end, you actually never know.

But I know this is easier said than done and that’s why I bring you a few things you definitely need to know in order to choose the right guy.

You have to know he has a past

You have to understand that he has baggage from the past. You aren’t the first girl he met and you can’t exactly know what emotional state he is in.

Maybe he has been hurt, maybe he doesn’t trust women that much or maybe he is just emotionally insecure.

I think that the best way to see his future behavior is to take a look at his past. People can change but not that much.

Their insides and their deepest feelings, perceptions, and principles are going to stay pretty much the same.

If he doesn’t want to do that himself, you can’t either.

I know that when you meet someone and the chemistry is out of this world, you feel drawn to that person instantly.

What you have to have in mind is that chemistry isn’t the key to a successful relationship. Chemistry can only help at the beginning.

It can draw two people close to each other, but as the time passes, the chemistry will fade.

If you are left with nothing at that stage of the relationship, it will probably fall apart and you’ll have to start from the beginning.

Never make excuses for the bad things happening in your relationship just because the chemistry is magnetic.

You have to be able to be yourself around him

I know this sounds cheesy, but it’s also very true. You don’t want to spend the rest of your life pretending you are something that you’re not.

It will slowly consume and destroy you in the end.

When you meet the guy you think might be the one, be yourself from the beginning and if he likes it, great.

If he doesn’t, screw him—you don’t need that kind of man in your life.

Being yourself around the person you love and not being judged for it is the best feeling in the world. You’ll be so happy because you will be both in love and true to yourself.

You have to be sure he has the qualities you need

Make sure that he is your match concerning things that are important to you such as religion, family, finances, etc.

Don’t focus just on the first thing you see—like for example the fact he has a sense of humor and he makes you laugh. Don’t let that blind you.

Sure, you’re fine with him at the beginning because he has that characteristic you love so much, but what if that certain thing is making you miss other things, big things, which he lacks?

If this happens to you, you are going to have huge problems later in a relationship when he doesn’t have the qualities you want.

You have to put yourself first

This is not selfish. It’s perfectly logical—especially if you have been hurt before.

You have to think about your goals and aspirations and once you know what they are, you have to find out whether he has the guts to support your dreams.

Does he have what it takes to help you when you need his help?

Never submit yourself to one person because you may find yourself coming to the end of your life without accomplishing anything because you were his emotional support entirely.

Find a balance, but don’t ignore things you want to do. If he really is the right one for you, he will support you in whatever you do and he’s going to make you a better person than you already are—and you are going to do the same for him.

There has to be trust and respect

The most important thing of them all. All of these things don’t make any sense if there is no mutual respect and trust.

You can like him as much as you like, but if you hide things from him or he hides things from you, there is something wrong. You have to respect his personal space as he has to respect yours.

Men value respect above everything else. For them, respect is the equivalent of how love, trust and appreciation are in women’s lives.

A man needs to feel needed and respected for what he does. If he is not, he will probably think that you don’t care enough about him and he slowly fall out of love.

The same thing is with you when it comes to trust and appreciation. You have to have it otherwise, you will feel unwanted and ignored.

Take a good look at the things you need to know before choosing the right guy and save yourself further pain from choosing the wrong one.

The heart is the one that chooses, but try to also involve the rational side of yourself in decision-making.

Try to find the balance between the two and you’re going to be just fine.