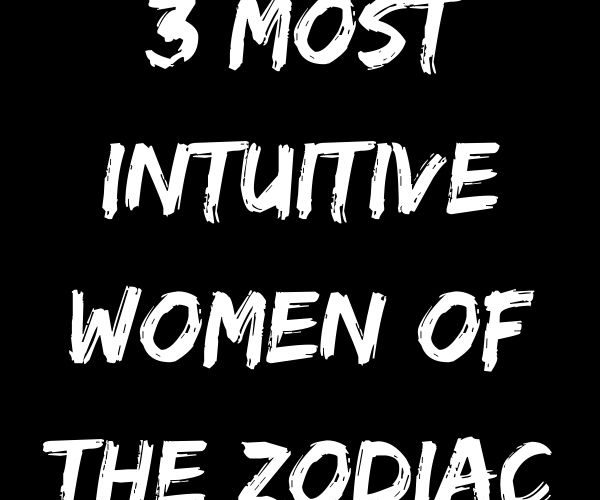 3 Most Intuitive Women Of The Zodiac

Every sign has something they’re good at, but these signs just know what everyone else can’t see right away.

The natural intuition of these 3 women of the zodiac, combined with their female intuition, is almost never wrong.

Pisces are shamans of the zodiac. As the last sign, they’ve learned every life lesson and therefore understand all aspects of life better than any other sign.

Pisces women frequently get cues through synchronicities and dreams. It’s often said they’re sensitive, but what’s misunderstood is that they’re not sensitive in a cry-baby sense; rather, they feel everything around them deeply.

Their ruler, Neptune, is connected to dreams and psychic abilities. That’s why a true Pisces has the ability to see things that are beyond the normal, even when they’re not aware of it.

Women with planets in this sign are revolutionary in fields that involve spiritual matters.What’s even more fascinating is their ability to feel the people on a collective level.

They are always concerned about a group and wish for positive changes in society.That’s why they’re often advocates for human rights, animals’ rights, and other similar issues.

Being a water sign with the mutable quality, they’re quick to adapt to changes and see things from different perspectives.Pisces is the universal sign and that’s why their compassion is stretched over society as a whole.

The biggest concern for them is not trusting their own intuition. They’re almost always right, but tend to change their actions or downplay themselves for the people they love.

It’s said that Cancer is a family-oriented sign, but in a broader sense, what that means is they have the ability to make everyone feel so welcome, connected, and close, they feel like a part of the family.

That’s one of the greatest gifts of Cancer women. They intuitively know what other people need and always make an effort to meet it.

If you need advice, ask a Cancer woman. She will know what your heart needs better than you because she can see through the fog of your fears and ego.Cancer women are healers who want to extend to the world their motherly love.

It’s no surprise that Aquarius is one of the most intuitive signs.Ruled by Uranus, the planet associated with innovation, discovery, novelty, and enlightenment, they’re always trying to understand what’s beyond reach for most other signs.

Aquarian women are fierce and unquestionable in their decisions because they strongly believe in their intuition and always look forward to the future.

While other intuitive signs tend to access this intuitive information in somewhat mystical ways, Aquarians have a very down-to-earth and proactive approach to everything they do.

Aquarian women are often seen as leaders of alternative groups who promote freedom and equality for all people. They are visionaries; they see far more than the rest of the signs.

Through their drive for achieving a better world, they succeed in letting go of their ego and spending their lives selflessly serving a higher cause.