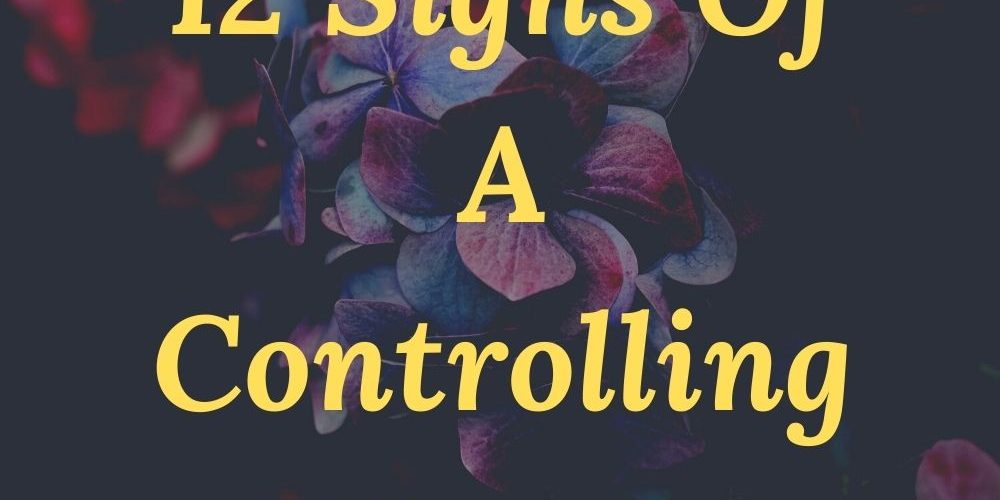 12 Signs Of A Controlling Woman

Is your woman trying to control you? Are you or have you become a controlling woman?

Every woman is different. Some of us have personalities of being overly emotional, stubborn, reckless, confusing, kind and so on. But, there are also women who are exhibiting controlling behavior.

Controlling behavior means constantly having the urge to have everything under control; making sure that everything goes as imagined.

Controlling people have their own specifically devised approach on how to make others obey and do things they want them to.

It’s really difficult to get along with them, and that is why conflicts become inevitable.

But, there’s one thing we should all be aware off:Controlling behavior is a disorder. It is not an acquired behavior. It is called Obsessive Compulsive Personality Disorder (OCPD), and the treatment usually involves a talking therapy.

So, if you think your woman has started controlling you, do not blame her.

She is not doing it because she wants to make you feel miserable.

She is doing it because she’s going through the stages of a personality disorder, and here are 12 signs confirming it.

12 signs of a controlling woman

She isolates you from your friends and family

She might be complaining about the time spent with someone in your family or with your friends (especially if they are females).

She does that because she is subconsciously trying to delete all of your support so that you become weak.

When you’re not that much surrounded by others, you become distant with them, and that way, it is easier to control your behavior.

For example, when she tells you that you should behave in a certain way or change some things, you will not have anyone to talk to about it to see their opinions regarding what she told you.

She is constantly criticizing you

No matter what you do, she always finds something that you did wrong.

No matter how much you try, you will always miss something that she will use against you. But, don’t get me wrong. Criticizing is good but to a certain degree.

In this context, criticizing is seen as a powerful weapon of manipulation.

It makes the other person feel undervalued and unaccepted. So, if your woman is constantly criticizing you for the smallest of things, know that it is not healthy.

It leads to a huge gap between two persons, and it is a sure destroyer of a good relationship.

She threatens that she will leave you if you don’t change some things regarding your behavior.

Also, she might threaten that she will harm herself if you leave her. It’s a double-edged sword, and it is hard to think clearly in a situation like this.

Threatening is another powerful weapon when it comes to controlling other people’s behavior.

It works on the principle: “If you don’t do this, I will make you feel bad for not doing it.” This also includes emotional manipulation like tears, playing the victim, etc.

She makes you feel like you’re not good enough

She is constantly pointing out your flaws, making you feel like you’re not good enough, and you’ll never be no matter what you do. No matter how hard you try to make things better, there will be another reason why you’ll never be able to improve yourself.

She is not supportive of your dreams and wishes because that would mean you have other interests except her.

She does this because she wants your full attention, and she wants to shape you to her preferences.

And that is only doable if you’re constantly reminded that you need to work on yourself in order to be accepted.

She expects everything from you, but she is not willing to give you the same treatment.

Reciprocity is the key to a happy relationship, and if your woman is depriving you of your right to receive what you’ve given, know that you’re in a controlling, unhealthy environment in which she forces you to think that you don’t deserve the same treatment you’re giving others.

She makes you feel guilty about everything

When something bad happens, you’re guilty. She accuses you of being guilty for every major and minor occurrence without any valid proof.

A controlling woman does this to maintain power over you because if you feel guilty, you will always be in an alert state that will push you to improvement.

Guilt is used as a tool that will force you to do anything in order to get rid of that feeling.

The feeling of guilt entraps you, and it forces you to become a completely different person, doing things you normally wouldn’t only to wash away your sins.

She makes you feel in debt to her

By giving you some things or doing something for you, a controlling woman sometimes creates the sense of expectation.

She might buy you something that you always wanted or feed you with her love and affection only to use it against you later on.

She might make you feel in debt to her for everything she’s done for you because her ulterior motives were related to controlling or this just becomes her weapon when she starts craving your attention.

She demands to know even the smallest of details about everything

She always demands that you tell her where you are going and how long you will be there.

She also demands even the smallest of details about the place you went to or the people you went with.

Sometimes, she even spies on you by checking your social networks when you leave your phone in the vicinity or demands that you show her what you’ve been posting. And if you refuse to do so, she will start doubting even more.

She does this because she feels insecure and doesn’t trust anyone around you.

That is why she has the urge to know everything and be in control of it.

She deprives you of your freedom because she herself feels entrapped.

She is overly jealous

She instantly becomes overly jealous for no apparent reason, and she demands that you convince her you are not hiding anything, and you’ve got nothing with these women.

Her jealousy makes her go crazy. You also might have witnessed the act of her jealousy in public where she was pushing you to admit to her you did something that you didn’t.

Every interaction you have with the female species is a potential threat in her eyes, and she immediately starts reacting to it.

Whatever you say to her, you are simply not right. She doesn’t respect your opinions on certain matters because she believes only in herself and needs to have everything under control.

You try to convince her that sometimes she’s just not right about something, but all of your efforts always end up in vain.

Also, you are never “allowed” to have alone time because she sees it as you being unwilling to spend time with her (even if you’ve spent a lot of time with her beforehand).

She doesn’t respect your need to have alone time, and when you tell her that you need to be alone, she starts suspecting that something’s wrong.

She teases you only to make fun of you

Sometimes she teases you about your appearance or about something you’ve done.

But, she doesn’t do it in a playful way. Her teasing is directed to making you mad and guilty of doing something.

The aim of this is to trigger your brain to think that you’re not good enough and to start looking for solutions.

She’s making you doubt yourself

You dream of a singing career or something else which is not that ordinary, and she never makes an effort to support you.

She’s making you doubt your skills again, reminding you that you’re not qualified for a certain position or activity.