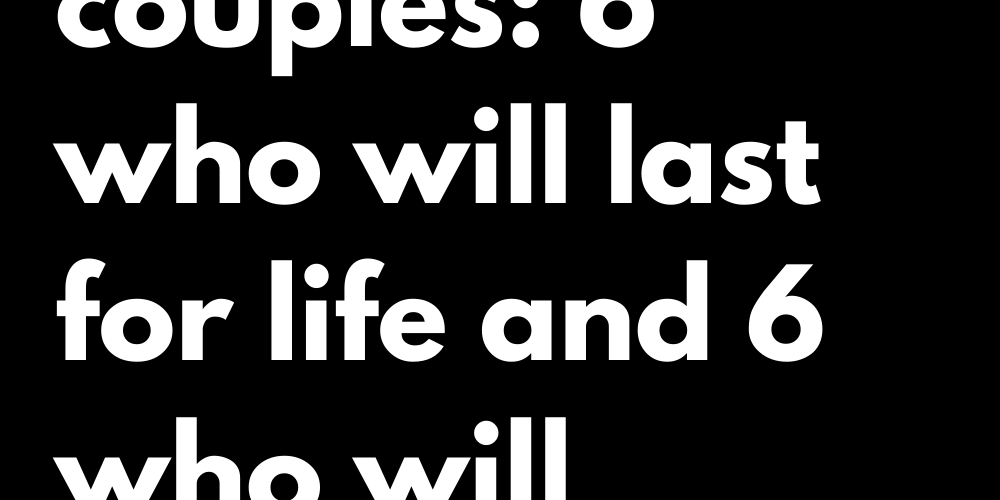 12 astrological couples: 6 who will last for life and 6 who will separate

They will fall in love as soon as they see each other and will be a couple in no time.

They then become not only lovers but also best friends, and their love is pure and strong.

When they walk into the room, everyone can feel the positive energy, and it shows that they are not wearing masks, but that they really love each other deeply.

They like to spend their free time together, but they also give each other time to spend it with the people they love.

There is a high level of understanding within their relationship, and they always go the extra mile to make each other happy.

Stubborn Taurus and emotional Cancer are definitely a bad couple, and it shows from the start of their relationship.

When they start a relationship, they try to spend a lot of time together like all couples, but the problem arises when they have to make a decision.

They just don’t have the same outlook on life, and they often argue over which opinion is the correct one.

When they argue, they forget about their partner’s feelings, and they would do anything to prove that they are right.

This combination is good for a short term relationship, but they just don’t have a positive future with such an attitude.

It’s a couple from paradise! They were born for each other. They are so cute when they finish their sentences and when they are called by cute nicknames.

These are people who click from the first moment, and their love will be deep and unconditional as long as they live.

They feel a lot of empathy for each other, so when one of the two is sad, the other tries to cheer them up.

They don’t act selfishly in the relationship and they support their spouse to spend time with friends and family.

They match each other up perfectly because they know that anyone can make mistakes, but that they have to be willing to work to correct them in order to get out of them.

Who could say that an emotional and sensitive Cancer wouldn’t get along with someone in a relationship?

Well that’s the case when they go out with Pisces. The catch is, this couple have amazing chemistry, but as soon as there is something that isn’t their way they go completely nuts.

In this relationship, Cancer enjoys attracting love and attention while Pisces live in their own world and try to meet their needs.

Step by step they are coming to the breaking point, and they cannot move forward. If they stay together, their relationship becomes toxic, which is not good for either of them.

This is why this astral combination never stays united for a long time. But the most important thing is that they don’t hold a grudge and are always friends afterwards.

The King of the Jungle gets along well with Capricorn because they both love power and success.

They don’t mind working hard, but they do like to be given credit for their hard work.

They are both very professional, and they like to be the best at what they do. In love, they are not selfish, so they would do anything to make their partner happy.

The point is, they can’t think about other people’s problems until they solve them.

They always push each other to be the best version of themselves and get quite proud and happy when they see the results.

They like to brag about their spouse’s success, so you will often see them talking about their loved one to their friends or co-workers.

The sensitive Virgo is always looking for a spouse who will love them more than anything, but surely will not be able to find them in Sagittarius.

Sagittarius is more stubborn and takes care of themselves and their desires. They need someone very special to strive for that person.

As a couple they become incredible friends, but when it comes to love, they argue all the time and it creates too much stress.

They can go out together for about a month because after that they start to take each other for granted and behave badly.

Both are quite stubborn when it comes to love, and when they make a mistake they never admit to being guilty.

Their arguments are always very tough, and in some cases their friends have to intervene to prevent them from killing each other.

The good thing is that once they go their separate ways, they don’t contact each other anymore and leave it all behind.

Libra and Cancer are both very emotional and sensitive, and this helps them keep their love alive.

When they love, they give everything, and they would do anything for the happiness of their spouse.

When you see them, their love reminds you of what classic love is, and it’s nice to see them happy because love like this doesn’t happen that often.

Apart from the fact that they are best friends, they are also amazing lovers, and you can feel their love for sure whenever you are with them.

It’s not that they don’t have any issues, but they’re always willing to sit down and talk about it.

They don’t hold a grudge, they solve problems as fast as possible so that they can enjoy their love afterwards.

The catch is, they can have a good time together, so they still hang out on each other.

Their arguments are quite vigorous, and if they have any problems, they will not wait to get home to resolve them, but they will argue in front of their friends and thus, bring them into embarrassing situations.

It’s true that their love is quite strong at first, but they can also run out pretty quickly.

They love with all their might, but as soon as they see their spouse taking advantage of them, they turn their life into hell.

With the right fit, they can last a while, but this combination is definitely not going to work in the long run.

Leo doesn’t want to brag with anything anymore, and they change their outlook on life.

They become modest and by learning new things from their spouses, they realize that until then they paid too much attention to the things that do not matter at all.

This is what keeps this couple alive, and they would never do anything to risk their love.

When they love, they give their all, and they change their priorities so that others can know it.

For example, Leos will always choose to stay home with their partners rather than having a crazy night out with their friends.

This is how much they love and cherish what they have at home. And the good thing is that their spouses do the same, which makes them equal.

It’s their recipe for undying love, and they pride themselves on keeping something so precious alive.

Gemini is a double sign, so you never know if what they’re feeling is real or not.

Only if you know him very well, you will be able to see if he really loves you or if he still can’t make up his mind.

In combination with Capricorn, Gemini always try to fulfill their own desires, not taking care of their partner, which ultimately puts them up against the wall, and they have no place to go. .

They just think they deserve someone better, so they take Capricorn for granted.

On the other hand, Capricorn doesn’t like them too much either. The good thing is, this astrological couple can have amazing evenings together and do things they’re not ashamed of.

It’s actually the strongest bond between them, and when that bond goes, there’s nothing else to hold onto.

That’s why the average length of their relationship is a week or two.

This astral couple is everything you would expect from love. When you see how they look at each other, and how much they are in love, you can only congratulate them and tell them how nice it is to see them like that.

They are so cute with their little nicknames and how they hold hands.

They are very romantic and start each morning with a kiss and a hug in bed.

It’s their routine that they never skip, and it’s one of the things that keeps them so close.

They are very tactile, and in this way, they express their love and desire for each other. This combo has found the secret formula to keeping their love alive, that’s for sure.

Pisces who live in their own fantasy world and the strong Capricorn are not at all compatible.

They just aren’t on the same page, and no matter how hard they try to make things work, they just don’t get it.

Sooner or later, they’ll be at odds with each other, which will bring back a nasty argument, and they won’t talk for months.

The problem is, they don’t know where they’re going with their relationship because neither of them is making huge efforts to make things better.

They just go with the flow, and they believe their relationship will work even if they don’t put much work into it.

But this is the problem. One of them still thinks the other is going to sort things out and vice versa, but in the end they hit a wall, and there’s nowhere to go. 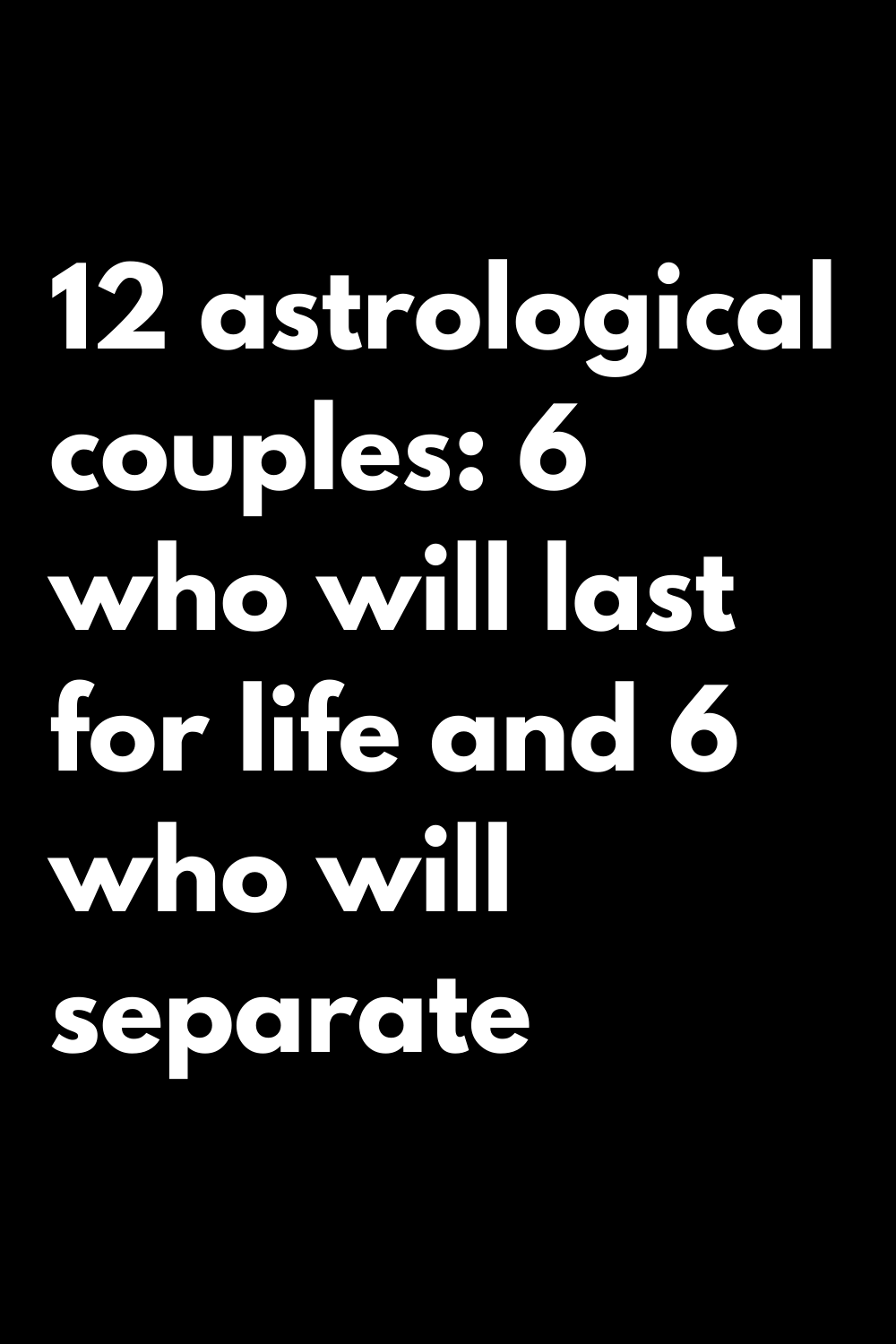